Coronavirus Rules about Social Distancing Highlighted My Relationship with Islam

It’s a testing time for many of us, as coronavirus has forced us to distance ourselves from families, friends and work. Sacrifices have to be made on how we go about our daily lives and it’s impacted my local Muslim community. 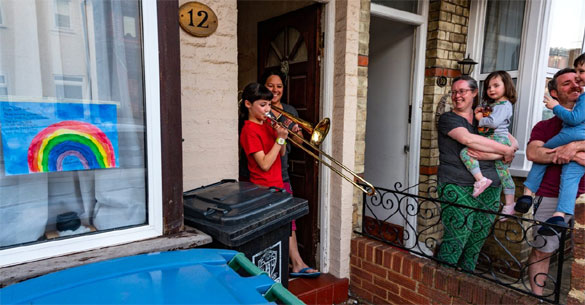 For one, I wasn’t initially surprised I had to persuade elderly people in my Asian Muslim community to practise social distancing – the dangers my generation of young Muslims were aware of through social and mainstream media had yet to trickle down to the media elderly Muslims consume.

I was horrified when I saw a family member come around to check on their elderly relative…. and enter their home. Insisting this act of kindness was dangerous, I found myself on the receiving end of harsh criticism from this individual. I do not regret what I said, and was relieved when lockdown rules were enforced. I began to instead see situations like my elderly next-door neighbour ask to see my mother-in-law’s face from the window, rather than enter my house. And as time passed by, the wider Muslim community quickly took it more seriously.

As the coronavirus situation worsened, I’m pleased to see how imams have stepped up – leaders such as Mufti Ismail Menk are trying to educate and inform Muslims on how to stop spreading the virus. He is a highly respected Islamic scholar with the ability to relate Islam with contemporary life humorously to his online following of 11 million people worldwide.

I’m proud my local mosque decided to ban gatherings including Friday sermons to prevent mass gatherings and the possibility of infection, even before it was compulsory. Mosques were being urged by organisations such as the Muslim Council of Britain to pray at home and this continued during the upcoming Ramadan period.

In general, Muslims did not flout the rules, contrary to popular belief. The mosque ensured further restrictions were put in place. A restriction ban separating households in parts of Northern England was issued 2 hours before Eid-Ul-Adha, preventing Muslim family celebrations. Pubs were allowed to remain open – my Muslim community were not reckless.

I don’t feel the lockdown has made practising my faith harder. In fact, for me, it has been the opposite. I have a very busy family and work schedule and during this spare time, it has meant that I have been able to re-evaluate what’s truly important, perform prayers promptly, practise my Arabic more, and spend more time connecting with loved ones whether that be on the phone or via a Zoom call.

Bizarrely, during coronavirus, I also found stockpiling to be a real bone of contention. In the British Muslim community, food is a big part of our large family culture, and it’s normal to come home with 20kgs bag of rice. Yet in Facebook groups for Muslim mothers cooking on a budget, I began to see people were accused of hoarding. I personally felt it was inappropriate to post stockpiling photos because it unintentionally antagonises those who are struggling to find basic food items. But the aggression online also made me feel uncomfortable as it goes against the principles of Islam.

On the other hand, kindness has always been a key part of being a Muslim. As the Holy Prophet Muhammad (pbuh) himself said: “kindness is a mark of faith, and whoever is not kind has no faith.” In this time, my faith has pushed me to get involved in community projects, especially to help those vulnerable or lonely. I decided to approach my elderly neighbours (from a safe distance, of course) who I had never really spoken to, which has resulted in wonderful new friendships. Muslims and non-Muslim neighbours hold a special status in Islam. It feels nice to know that my small actions have made someone feel better during a stressful time.

Many Muslims tend to give zakat during the holy month of Ramadan but charities and scholars have urged Muslims to give it earlier during this unprecedented time to support people struggling with coronavirus worldwide. And coronavirus has made me more conscious of donating zakat to those in closer proximity to me, rather than just international causes.

For me, Islam has always helped me to be more resilient. I believe that while I cannot control events around me, I can control how I react and behave towards other people and obstacles. I can reflect and be grateful for what I have been blessed with. However, it’s important to remember that if a fellow Muslim is feeling anxious or uncertain, it does not necessarily mean they lack faith. With a second nationwide lockdown looking imminently likely, we all need to keep an eye on one another and build each other up.

I hope that once we eventually emerge from this period of confinement, British Muslims and non-Muslims can carry on being appreciative for what we do have and most importantly support those vulnerable in our local communities.

Original Headline: How Islam Helped Me to Cope With Coronavirus