A World Plagued: It Is Time to Put the Last Man First

“Life is what happens to you while you’re busy making other plans,” John Lennon had said memorably. The spread of Covid-19 over the last three months might provide the most powerful illustration of this sentence that we will see in our lifetimes. Think back to late February or early March and the projections you had for the coming months. Try and remember the slow seeping into your awareness of the virus affecting China, then Iran, Italy and other countries and then, finally, the day you realized that your plans were also directly in the path of the onrushing new reality, and you might have felt like the man tied to the rail track who sees the speeding train engine appear on the horizon. 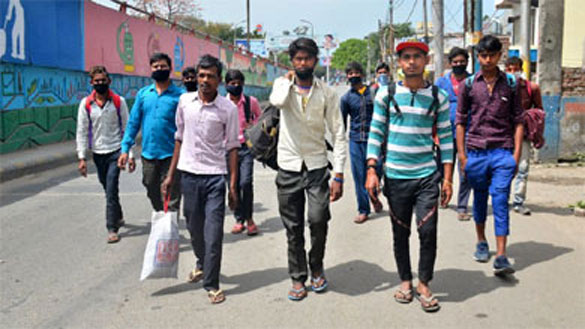 Migrant workers walk towards their home in Bareilly in the absence of any means of transportation, during day-2 of a nationwide lockdown imposed in the wake of coronavirus pandemic, in Moradabad, Thursday, March 26, 2020, PTI

Now, of course, we are where we are. Every day comes with shifting minefields. Every human exchange outside our immediate dwelling is fraught with danger, every unforeseen interaction feels life-threatening, every un-patrolled surface is a potential booby-trap. It’s as though our lives have shrink-wrapped around us; we have suddenly turned into reluctant, protesting products, sealed airtight by our fears, with the only material we have for our protection — our awareness — climbing into every nook and cranny of our being. This constrictive packaging entraps not only our physical selves but also the maddening, unwieldy structures of our intellect and psyche. As a result of some bad magic, we are placed on a supermarket shelf, exactly like those heads of broccoli or the red peppers we miss so much, and we hold our individual breaths as Customer Covid saunters by, prodding and poking to see what looks good today.

Our constantly nibbling awareness tells us that even this is a limited or false understanding, applicable only to those of us who have homes with balconies on which we can stand and beat thaalis, from which we can wave lighted candles and phone-torches while shouting ‘Go-Corona-go!’

Late at night, I happen to be up when a small truck goes past on the road outside. Through a gap between two tall buildings, I see it bumping along, the open back packed tight with standing men — clearly workers being transported somewhere. Such is the night-silence nowadays at the big crossing where I live that I can actually hear them chattering loudly. Physical, social or virtual, there is no ‘distancing’ on that truck — whatever one person has, he will likely end up sharing with everybody else. Further away, on the highways that fall outside the prime minister’s imagination, is a mass of moving people who don’t register on the radars of the home ministry, health ministry or finance ministry. On these highways that are somehow ‘outside’ the India that is Bharat, lakhs of Indians who are apparently not Bharatiya enough are trying to get home. The whole new bag of words, phrases and acronyms, ‘lockdown’, ‘anti-bodies’, ‘testing’, ‘community spread’, ‘WFH’, ‘flatten the curve’, ‘PPE’, seem not to apply to this other species of humans but only to the urban ‘middle-class’.

Sitting on our shelves, we the balconied classes are supposed to believe that somehow, with no infrastructure, no equipment or organization, with nothing but knee-jerk thought given to this crisis by the statue-obsessed, vista-vandalizing authorities in Delhi, the vast numbers of poor, working-class Indians will also be protected from the depredations of Covid-19. Given life’s habit of springing surprises, it may well happen that we as a population avoid disaster in the strictly narrow terms of the pandemic; but as a society we are already reeling from the hard kick we’ve taken right in our middle.

The internet is already full of images and projections as to what might happen in our near future and further down the line. There is one image that takes off from the famous poster for the movie, Jaws: a human is swimming on the surface of the sea as a big white shark shoots up towards him, mouth open, teeth bared. This shark is labelled ‘Covid-19’. Underneath that predator is another, larger shark about to swallow the first one — its label says ‘Economic Crisis’. Below all of this, just rising into the picture is a huge leviathan of a shark that will swallow all the creatures above — it is labelled ‘Ecological Meltdown’. The image is crude but the message carries a stark truth. And what it’s missing is the huge octopus that could ensnare all these creatures as they devour each other, an octopus we could label ‘Autocracy’.

As The New York Times columnist, Paul Krugman, lays out in a recent column, this Covid-19 crisis is a great opportunity for the enemies of democracy to tighten their grip on various countries from Hungary to the United States of America. For instance, in the US, the state of Wisconsin in the previous elections voted 53 per cent Democrat and, yet, the gerrymandering of the voting areas was such that the Republicans retained control of the state legislature. In the recent elections, with the state under a stay-at-home order because of Covid-19, the Republican legislators backed by the partisan Republican judges in the US Supreme Court forced the elections to be held as if things were normal, disallowing early voting and voting by mail. The Democrat-leaning voters in the urban areas could not vote with many of the booths closed because of the virus. The Republican-heavy rural areas had no such problems. “The state G.O.P. was nakedly exploiting a pandemic to disenfranchise those likely to vote against it,” says Krugman, adding, “What we saw... in short was a state party doing whatever it takes to cling to power even if the majority of the voters want it out...”

Closer home, we have also seen the party in power twisting and bending democratic levers to retain power or usurp it in different arenas. No doubt the extreme, unprecedented situation created by the Covid-19 crisis will be mined by our bent politicians to further tighten their grip on power and hack into an already weakened democracy. But, on the other hand, no one has had any previous experience of how to deal with a challenge such as this.

First, of course, we have to come out at the other end of this crisis. In this, we will need to identify what exactly ‘the other end’ means; what the light at the end of the tunnel consists of; when will be able to say the crisis is ‘over’? Or ‘under control’ enough so that ‘normalcy’ can re-boot? Equally, one will have to carefully define both the ‘we’ which survives and prevails and the ‘normalcy’ that returns, or, more likely, newly coagulates.

During this crisis and lockdown, privileged people have had to learn all sorts of lessons in self-sufficiency. And one hopes that at least after this time people’s basest selfish instincts will be dented. No matter what the politicians do or don’t, we the janata would all do well to realize how much the elite and middle class depend entirely on the labour of those who aren’t afforded the luxury of self-isolation, physical or social distancing, or even basic access to food. Are we really happy to be the selfish, privileged layer of rancid cream at the top of a deprived and constantly beleaguered population? Do we continue with the ‘every man for himself’ attitude that is actually being encouraged by so many of our leaders and oligarchs and so much of our media under the pretences of patriotism, dharma and sanskriti? Or will we realize that the only way we survive as a society is by putting inclusivity, fairness and justice at the centre of whatever we plan and do? Do we get back on to the 8-lane highway of our greed and gun the engines and take our foot off the brake of the pesky little pit stop? Do we leave the ecological crisis to other nations while demanding our pound of developmental

flesh? Or do we remember and put into constant practice that Gandhian axiom of thinking first about the poorest, the most deprived person in the country?