To HIM Belong the Most Beautiful Names

The other day, a friend of mine sent me an email message: “Write something about the ridiculous Malaysian Supreme Court judgment, please—the one declaring the word “Allah” to be a Muslim monopoly.” “It’s really awful, this judgment—as if Muslims own God”, my friend, who is a Muslim, went on. He was understandably upset. “I’m tired of this communal supremacism. And it’s getting from bad to worse with every passing day.” 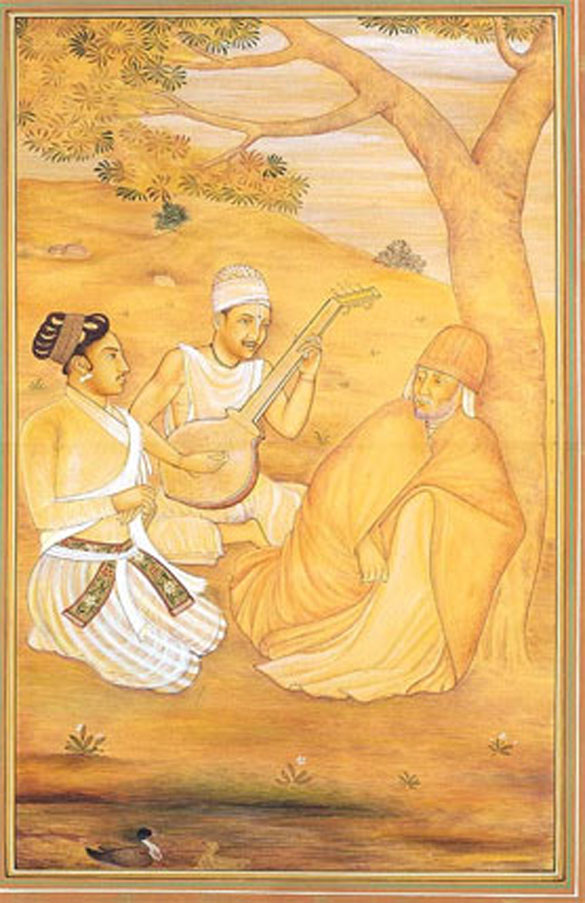 ​(Portrait of the Vaishnava meeting the Sufi as Akbar looks on)

I haven’t been reading the newspapers regularly these days, I mentioned in my reply to my friend. “Who wants to be injected with a heavy dose of negativity the first thing in the morning?” I said. And so, I explained, I hadn’t heard of the Malaysian court’s verdict, although I was aware of the controversy between hardliner Muslims and the Catholic Church over the use of the word ‘Allah’ in the Malay-language Bible that had been raging for several years. That the highest court in what is showcased as the world’s ‘model modern and progressive’ Muslim country would echo the demands of radical Islamists and Malay Muslim communalists didn’t seem all that surprising to me, though. I had spent nine months in Malaysia some years ago, and I had a feel of how things were on the inter-communal front in that country.

“I really don’t want to react to such negativity,” I told my friend. “It won’t do any good. Better to focus on the positive. Darkness has no existence of its own. It’s just the absence of light. ‘Light a candle and the darkness disappears’, as they say. And so, I’m not going to condemn or critique the Malaysian verdict and the logic that informs it. Instead, maybe I’ll do my little bit by writing something positive.”

That’s how I got down to writing this article—albeit with some reluctance, as these days political wrangling, and inter-communal bickering and religious polemics don’t interest me in the least.

For the past few weeks, I’ve been hooked onto a delightful Quawwali that I stumbled upon while surfing youtube.com. It’s an elaboration of a beautiful hymn by Guru Nanak contained in the Guru Granth Saheb, masterfully rendered in Quawwali form, with great devotion and passion, by the ‘king of the Quawwals’, the late Ustad Nusrat Fateh Ali Khan, who sings it, along with his team, in a Gurdwara in the United Kingdom before a largely Sikh audience. You really MUST listen to it (click on http://www.dailymotion.com/video/x15kac5_nusrat-fateh-ali-khan-koi-bole-ram-ram_music)

The hymn reads as follows:

Some serve Him as ‘Gusain’, others as 'Allah'.

He is the Cause of causes, and the Generous Lord.

He showers His Grace and Mercy upon us.

Some pilgrims bathe at sacred shrines of pilgrimage (Teerath), and others go on Haj.

Some do Pooja, whilst others bow their heads in prayer.

Some read the Vedas, and some the Quran.

Some wear blue robes and some wear white.

Some yearn for paradise (Bahisht) and others long for heaven (Swarg).

Says Nanak, “He who realizes the Command of God knows the secrets of his Lord and Master.”

It makes no difference by what name you call God, Baba Nanak tells us here: Ram, Khuda, Gosain or Allah. It doesn’t matter what method of worship you adopt, or where you seek Him: in the bathing Ghats of Kashi, in India, or in the Kaaba, in Mecca, Arabia, or what colour ‘sacred’ dress you wear. What you call yourself—‘Muslim’ or ‘Hindu’ or whatever—too, is immaterial: it’s just a label. All these petty differences, which many religionists blow totally out of proportion and consider as essential to ‘true religiousness’ and an essential and indispensible means to please God, are nothing of the sort, Guru Nanak suggests. Giving such inordinate importance to the external trappings of religion, we delude ourselves into thinking that this is what God wants of us. This obsession with name and form—the insistence on the claim that God must be worshipped in this, not that, way, that one should call oneself by this, not that, communal label, that one should undertake a pilgrimage here, not there, that God must be called by this, not that, name—far from bringing us closer with God, takes us even further away from Him, Baba Nanak says.

“Some call Him 'Ram Ram', and some 'Khuda'. Some serve Him as ‘Gusain’, others as 'Allah'. He is the Cause of causes, and the Generous Lord. He showers His Grace and Mercy upon us”: echoing Guru Nanak, that’s precisely what I’d tell the worthies of the Malaysian Supreme Court and other supporters of the ban on the use of the word ‘Allah’ by non-Muslim Malaysians if I ever got the chance of meeting them. And, I’d quote to them from the Quran, too, which says just the same thing: ‘‘Call upon Allah, or call upon Rahman: by whatever name ye call upon Him, (it is well): for to Him belong the Most Beautiful Names’ (Quran 17:110).