I Wish You Had Not Done What You Had Done

The G7 Nations’ leaders gathering in Japan in April recently laid wreaths at the atomic Memorial Park in Hiroshima. Of the seven nations- -United States, Britain, France, Germany, Italy, Canada and Japan, the first three nations are official members of what is called the Nuclear Club that is, the self-appointed custodians of ensuring peace and trouble free world with their arsenal of nuclear weapons.

Japan is the country which bore the brunt of not one but two atomic bombs dropped on it at the end of WWII. It is argued by many that IF it was necessary to drop the atomic bomb to end the vestiges of war quickly to save lives by forcing Japan to surrender, then one bomb was sufficient for the purpose. The first bomb was dropped on Hiroshima. The second was dropped later.

To drop a second one three days later at Nagasaki was an overkill when the results of the first were well known by then. But perhaps it was necessary to test the newer bomb on live human target on Nagasaki, just to make sure it also worked!

A bitter and sarcastic Japanese person could have also added that it was done because Japan was an Asian country. However a polite person such as the Japanese would not publically make such a statement.

However a Japanese young lady was quoted on the TV news of that day saying “I wonder how a person from a country which still owns nuclear weapons would perceive the Memorial Park?” Of course a very polite and politically correct statement by a lady from the country which prides itself on showing politeness in public. What she perhaps meant to say in common parlance is that “They have a hide thick as buffalo” to do what they do here! 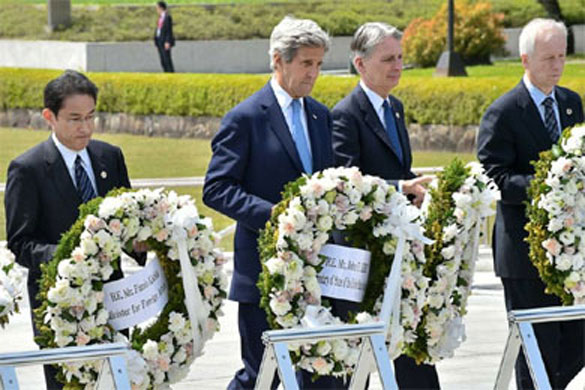 Foreign dignitaries including US Secretary of State John Kerry offer wreaths at the Memorial Cenotaph. (AFP)

“US Secretary of State John Kerry has been deeply moved describing the Hiroshima atomic bomb memorial as "stunning" and "gut-wrenching", but offered no apology for the attack that killed some 140,000 people in 1945.

Following the visit by Mr Kerry and his G7 counterparts, the foreign ministers issued a statement reaffirming their commitment to building a world without nuclear arms, but said the push had been made more complex by North Korea's repeated provocations and by the worsening security in Syria and Ukraine.”

A proviso of some sort? How strange a political spin and twisted statement is that?

North Korea’s repeated provocations and worsening security in Syria and Ukraine are the making of this decade. It is seventy years since the proliferation of nuclear weapons has been going on right under the Club’s noses and often with their connivances!

The Club itself, even after promising to disarm themselves of nuclear weapons so as to set an example for others not to build nuclear weapons; is itself a huge accumulator of all sorts of weapons of mass destruction including nuclear weapons. That is what the Japanese lady was implying; but ever so politely.

The polite Japanese lady was right. Should the world give the US Secretary of State Mr Kerry the benefit of doubt now for the statement that followed?

"It is a reminder of the depth of the obligation every one of us in public life carries ... to create and pursue a world free from nuclear weapons," Mr Kerry told a news conference. An example of clean politics.

‘Tony Blair makes qualified apology for Iraq war ahead of Chilcot report….admits mistake and conflict’s role in rise of Islamic State but defends armed intervention in 2003’!

(If only poet Ghalib was alive, he would have said;

Some dictionaries give one of the meanings of “Sorry” as, merely formally apologetic and “Apologetic” as regretfully acknowledging fault. It is left to the reader to fathom the hidden ‘sorry’ or the ‘apology’ in it, if it is at all there.

Similarly, the toxic culture of taking illegal drugs in sports. There are the top athletes of the sports world, too many to name. After making millions if not billions of dollars are quick to say sorry to the world on being caught for illegal drug taking. One name early in this game that comes to mind is that of Marion L. Jones, champion Olympic track and field athlete. She was stripped of the titles after owning up to steroid use. She apologised with a straight face, but kept her millions.

Is there such thing as clean sports today or even clean politics! Is there any aspect of modern society that is clean?

Religion, business, finance, judiciary, health, education, media and any other institution one cares to name, is not immune today from the scourge of unclean culture of ‘just do it’ syndrome that pervades these institutions that are supposed to provide honest and efficient services to the citizens of the world! The consequences of just doing it, in most instances are so obvious yet they are left to the lesser gods with provisos, to be dealt with when the consequences manifest themselves.

It seems that the trend is established from the top down to “Just do it” for as long as one gets away with it, because it is not immoral to apologise or say sorry if caught. In fact it is considered a godly thing to do and therefore a virtue to say ‘sorry’ then; that is plead guilty by giving proviso for doing it in the first place. The fact that the proviso was immoral and unethical in the first place is immaterial.  What is done is done; ‘mission accomplished’. The end justifies the means!

(Poet Mirza Ghalib may have also said that it was not possible for mankind to be human being:    آدمی کو بھی میسر نھیں انساں ہونا))

The higher echelon of mankind may feel protected—and very often they are-- from the punishment of their actions carried out for personal or national strategic gains but it by no means suggests that the ordinary person feeling the bite and infected wounds from these bites is immune too.

The youth of today is searching for ‘meaning for life’ and in that search falls into the wrong hands. Not all nations and individuals are as polite as the Japanese lady in the news item was at the wreath laying ceremony at Memorial Park. Ordinary people are aware of the causes that affect their lives and are likely to take matters in their own hands.

The lesser gods and higher echelon is duty bound to clean up their act and consider the obvious consequences of their strategies, personal or national to prevent the rise of the Biblical Beasts of Revelation such as Tony Blair’s Islamic State or Barak Obama’s mythological many-headed Hydra whose one head when chopped off would re-grow many more.