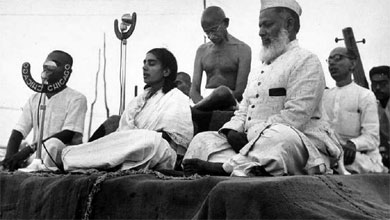 Gandhi was suspicious of many things modern, including modern Hinduism: a new, 19th century religion, sharply demarcated from others, and a fitting rival of Islam and Christianity. Why? Because he viewed himself as a sanatani, an adherent of a way of life that started long, long ago but, unlike the ancient that is dead and gone, continues to live today.

Central to this seemingly everlasting Hindu imagination is its deep plurality, reflected in its acceptance of the co-existence of three basic ethical forms: one dependent on multiple gods and goddesses, one on a single god, and one even entirely independent of god, gods and goddesses (truth-seeking). For Gandhi, this religio-philosophical plurality is the inevitable and healthy destiny of humankind. “There is endless variety in all religions” and “interminable religious differences,” he said. “Some go on a pilgrimage and bathe in the sacred river, others go to Mecca; some worship him in temples, others in mosques, some just bow their heads in reverence; some read the Vedas, others the Quran… some call themselves Hindus, others Muslims…” For Gandhi, there is not only diversity of religions but also diversity within them. “While I believe myself to be a Hindu, I know that I do not worship God in the same manner as any one or all of them.”

Given the inescapability of deep religious diversity, he argued, “the need of the moment is not one religion for the whole of human kind, but mutual respect, equal regard and tolerance of the devotees of different religions.” This moral-practical attitude of equal regard for all religions is entailed by an epistemic grasp of the deeper, more fundamental unity of all religions. “The soul of religion is one, but encased in a multitude of forms. Wise men will ignore the outward crust and see the same soul living under a variety of crusts.”

The basic reference of all religions is the same: God or Truth. “All religions are true and all have some error in them and that whilst I hold by my own, I should hold others as dear as Hinduism and make no distinction between them.”

Gandhi’s inclusive (belief in one God that encompasses all gods) rather than exclusive (belief in only one True God, while holding all others as false) monotheism flows directly from Indian ‘polytheistic’ traditions, a trait they share with other religious traditions of the ancient world (Greek, Latin, Pre-Islamic Arab religions). The implicit theology of these religions allows for translation of gods.

In virtually all cultures of classical antiquity, each god performed a function based on his cosmic competence — gods of love, war, knowledge, or craftsmanship. Likewise, each god embodied an entity of potentially cosmic significance — gods of fire, rain, earth, time, sun, moon, sea or there were primal gods who create, destroy, preserve and so on. Virtually, every god or goddess in one culture could be related to gods and goddesses of another culture. For example, the goddess Parvati of one Indian regional culture is related to the goddess Durga of another region by viewing both as benign and fierce forms of one primal goddess, Devi. This way differences — benign/fierce — continue to be viewed as irreducible and yet translatable. This is a theology of recognition in which the gods and goddesses of each culture are recognised within the background of a common semantic universe.

One feature of inclusive monotheism then is that “all worship the same God although under different names”. Gandhi illustrates this by a striking verse from the Guru Granth Sahib in which Nanak says that God may be called by the name of Allah, Rahim or Ram. Such an ecumenical perspective permits multiple attachments. If different names refer to the same god, then why not embrace all?

Two more things follow. First, “to revile one another’s religion, to make reckless statements, to utter untruth, to break the heads of innocent men, to desecrate temples or mosques is a denial of God.” Second, “it is wrong for anyone to say that his God is superior to that of another’s. God is one and the same for all. At one level, there is a fundamental unity among all religions and precisely because of it they must be regarded as equal. If so, movements of conversion or purification are pointless. ‘The real Shuddhi movement consists in each one trying to arrive at perfection in his or her own faith.” In such a plan, a person’s character is the only test. “What is the use of crossing from one compartment to another, if it does not mean a moral enhancement?”

For Gandhi, respect and toleration were related, and virtually indistinguishable. This might appear strange. To ‘tolerate’, in the classical 17th century meaning of the term, is to refrain from interference in the activities of others even though one finds them morally repugnant and despite having the power to do so. Here one puts up with, even suffers the morally reprehensible activities of others. At best, the powerless other escapes interference of the powerful because the latter shows mercy towards them. This is hate-based toleration — I hate but still tolerate.

Gandhi’s ‘toleration’ is different. How? Parents often put up with the blemishes of their children which they would not suffer in others. We choose to overlook a fault in our spouse, lover, or close friend that we would not excuse in others. We might endure differences with fellow citizens because we value fraternity. In short, we tolerate some disagreeable beliefs and practices of persons or groups because we identify with many of their other beliefs and practices. In all such cases, we put up with dislikeable states of others even if we have some power to do something about them simply because we have love or love-like feelings for them. Others are tolerated not despite hate but rather because they are loved — I love, so I tolerate. This is Gandhi’s love-based toleration, entirely consistent with respect.

Unlike the mainstream, hate-based conception of toleration that presupposes that oneness with significant others is achieved by abolishing the radical other, by eliminating plurality, for this second, Gandhian conception, oneness is attained by accepting all radical others as equally significant because they variously manifest one Supreme Being. Thus, to tolerate is to refrain from interfering in the life of others not despite our hatred for them, but because we love them as alternative manifestations of our own selves or because we deeply care for some basic norm common to all of us. We may not be able to be what they are, we may even dislike some of their beliefs and practices but we recognise that they are translations of our own selves or of god within each of us. This, Gandhi believed, binds us together in a relationship of lasting affection.

Rajeev Bhargava is Professor, Centre for the Study of Developing Societies, Delhi