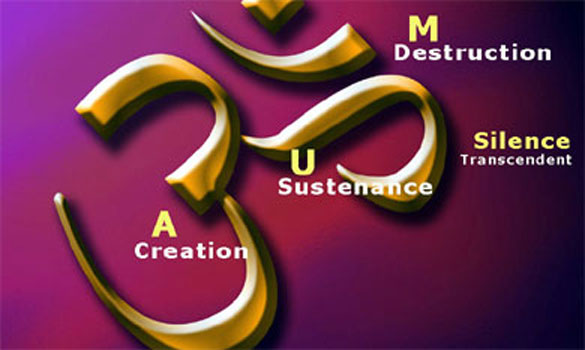 The Mandukya Upanishad maps out the entire range of life experience in the sound of Aum, in elaborating on the mystery of Brahmn, in 12 short verses. It does so by juxtaposing the four states of consciousness with the syllable Aum, and alludes to how this Aum pranava sound syllable corresponds to each of those states.

The opening aphorism sets the tone for an inquiry into the cause of this material-temporal world, by asserting that the Aum principle lies at the root of not only this manifest universe but also at the heart of the cosmic rhythm itself. While establishing Aum as the sonic measure of the universe, the Mandukya equates it with the “four-footed” Atman.

The Mandukya goes into a description of the four stages of Consciousness which define the Atman, the jagrat, waking state; the svapna, dream state; the sushupti, sleep state; and turiya, the fourth transcendent state. This analysis of the Self as Consciousness begins with the immediacy of sense-perceptions felt in the jagrat state where all of us are alive to the body and the visible world. Vaishvanara, this waking consciousness, makes us aware of and respond to the external, as we go about our daily lives, operating through “seven limbs” and “19 mouths” – five jnanendriyas, five karmendriyas, five pranas and four inner faculties of Manas, Buddhi, Ahamkara and Chitta.

Taijasa is the second aspect of self, the dream consciousness, which interiorises the external world within the mind. The mind creates an entire world of its own, and comes alive with the same intensity as one was feeling the external world earlier in the waking state. This dream state could be triggered by unfulfilled desires or by tapping into a subtle realm inadvertently, but the dream state is as real to the dreamer as is the waking state to a person. Mandukya alludes to the fact that the mind is active in both these states.

When the mind has withdrawn itself completely, arises the sushupti state of deep sleep. This Prajna-Ghanah, where there is no external or subtle movement of mind, induces a happiness greater than the one obtained through senses. Ananda, bliss of deep sleep, takes one into a causal state where one is not distracted by desires. It is a state which is enjoyed momentarily by each of us in sleep, waking up refreshed and energised. Mandukya urges the seeker to refine his consciousness in a way as to summon up this blissful state at will, through yogic Sadhana.

Turiya is the fourth state of consciousness, wherein thought itself has found its source and has got absorbed in it. The knower and the known become one. Mandukya corresponds the turiya state of pure consciousness with the syllable Aum, the primordial sound of silence. He then breaks up the syllable Aum into the three matras of A-U-M, where the letter A corresponds to the waking state of consciousness, the letter U to the dream state and the letter M to the deep sleep state. The fourth letter and state is the sound of Aum itself, from which the manifest universe has burst forth, Sphuta, the frequency, at which the primal energy resonates, into which all sounds of the world get absorbed. When sounds merge into the pranava, Atman alone remains.