Saudi girls escaping their parents' house is a development that has caught the attention of many researchers and social workers in the kingdom. Although the number of cases has not yet reached the level of a “phenomenon,” a conservative society such as Saudi society looks at these cases with suspicious eyes mixed with surprise.

What is more serious, however, is what was revealed by an academic specializing in social affairs. The academic said there are external networks luring these Saudi girls into exercising “vice.” The academic said the cases have recently increased in number. He said the main reason was that “males are abandoning their duties and responsibilities and pushing girls to assume them instead.” 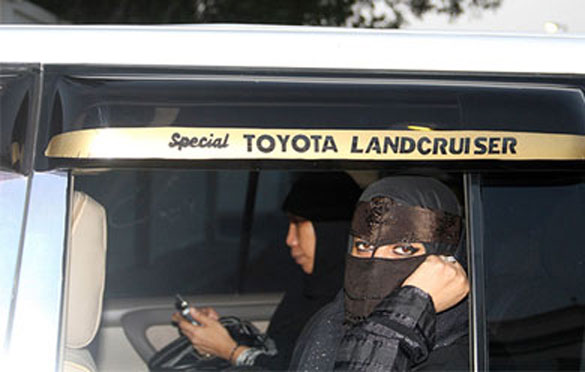 A Saudi woman looks out from the back seat of a car in Jeddah, June 17, 2011. (Photo by REUTERS/Susan Baaghil)

Sources estimated to Al-Hayat the number of escape cases in the kingdom at between 1,500 and 3,000. However, no official source has revealed the exact number of cases, which raised questions about the absence of any official announcement.

Mansour al-Askar, an associate professor of sociology at the Imam Muhammad ibn Saud Islamic University, told Al-Hayat, “The escape of girls has recently turned into a phenomenon with the increasing numbers over the past years,” and pointed out that there are two types of cases: first, the so-called “disappearance,” and second, the escape.

Askar said there are families that do not inform the authorities to protect the reputation of their girls and avoid a scandal. They probably do so because they are kidnapped, and probably because there are authorities who confuse escape and disappearance.

Askar attributed the escape of the girls to “social and psychological factors,” but said the main reason for the escape is “related to the family responsibilities, as the children or the fathers abandon their main responsibilities, which consist of meeting the needs of the family, and leave the girls to assume these responsibilities. This places great pressure on girls, who find their fathers or children busy partying with friends, travelling or doing personal stuff. Thus, girls feel burdened by a lot of work in the family.”

The past few years have witnessed many changes at the level of social concepts and patterns in Saudi society. According to Askar, these changes have led “some families to prevent their girls from visiting their friends, leaving the house or meeting anyone. This has significantly contributed to increasing the psychological pressure on them, which prompted some of them to consider escaping their houses to be rid of the harsh life they face inside their homes.”

Around eight years ago, Askar carried out a comprehensive study about this phenomenon in the kingdom. The study took two years and was submitted to the General Presidency of the Commission for the Promotion of Virtue and Prevention of Vice. The study included different regions, covered 5,000 cases, and monitored several reasons leading Saudi girls to flee their families and diagnosed the social status of girls.

Askar said that “during the preparation of the study, they monitored external networks in the Arab countries taking advantage of the escape of the girls and luring them into immoral acts.”

He said there were courts in Riyadh and Jeddah that witnessed such cases. He said, “Girls are being lured by their friends into these countries, and some girls force their families to visit these countries under the pretext of spending the summer vacation. Once there, the girl escapes after agreeing with a friend of hers who facilitates the process, and the escaping girl ends up discovering that her friend works with an unethical network.”

Askar stressed that there are “very few” such cases. He said the province of Jeddah (in the west) is “one of the regions in the kingdom that witnessed most cases of escape due to the large number of furnished apartments, which makes it easier for them to escape.”

The head of the Family Development Center in Al-Ahsa, Khalid Halibi, confirmed that the rate of escape of girls in the kingdom is on the rise, and said 1,400 cases were registered over the course of one year. “A large proportion of this figure is for foreigners,” he said. Meanwhile, he suggested that the escape of girls might turn into a “phenomenon” and stressed the importance “of confronting it, due to the hazardous effects it leaves on families and their reputation and due to the resulting damage to the community.”