Love Is The Sufi Foundation For Bliss, Says Shaikh Kabbani, Known For His Fatwas Countering Terrorism And Intensive Deradicalisation Of Muslim Youth In America

One of the world's most renowned scholars of Sufi doctrines and the spiritual science of Islam, Shaikh Muhammad Hisham Kabbani said here today that Sufis believe we should speak spontaneously from the core of our hearts, with no prior preparation, when dealing with subjects like love and peace. He said that letters and numbers are highly significant in Sufi tradition. The Arabic word for love “Hub”, he said, is made up of two letters: Ha and Ba, the first denoting a lovely life and the second referring to the eternal existence of love. 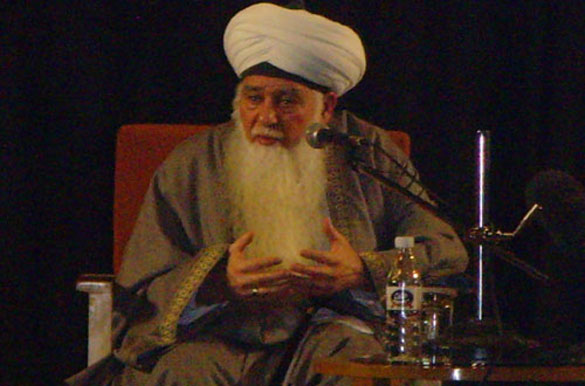 Shaikh Kabbani continued: “My spiritual guru Sheikh Nizami asked me several times to visit India, considering it the place of infinite love and harmony. India is extraordinarily important for Sufis as it has given birth of the towering figures of Sufism. Indian people are greatly blessed as they live among the holy saints.”

“We view India, he said, as the citadel of learning and spirituality and therefore we show great veneration to the Ulema, Sufis and Islamic scholars born in India.” When the Prophet Muhammad (peace be upon him) recommend his companions by saying “Seek knowledge, even if you had to go to China”, he probably kept India also in his mind. Therefore, Sufis flocked towards India and put stay here for good, he said.”

He posed a question to the audience: what is there in the graves of the Sufi saints that attracts a surging crowd towards them? “It is nothing but their pure and all-embracing love for the mankind irrespective of faith, creed and ethnicity.” He answered. 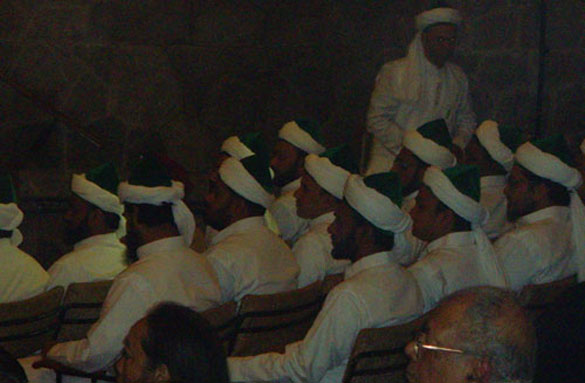 He said that all the pioneers of Sufi orders laid great emphasis on the spiritual seclusion and focused meditations to attain closeness with God. “Through the mystic mediations, Sufis actually sought to purify their hearts and souls, as the deeds of the heart, according to them, are more important than the deeds of the limbs and senses. Heart is the essence of the human being and the deciding entity of man's righteousness or wrongdoings. This is clearly evident in a Prophetic tradition in which he says: “In the body, there is a piece of flesh (Mudghah), if it is good, the whole body is good, and if it is bad, the whole body is bad; truly it is the heart." Therefore, he went on saying, we should concern ourselves with the deeds of our hearts more than the deeds of our limbs and senses, because the good deeds of the limbs and senses like praying, fasting, and reciting the holy Qur'an may be acceptable only if the righteousness (taqwa) lies in the hearts.

Hailing from a great tradition of humanitarianism and social activism, Shaikh Kabbani urged people to shift their focus from the ritual acts to the voluntary worship, that is engaging with social welfare causes and charity works, as outlined in this Prophetic saying: Allah, the Exalted, has said: “My servant keeps on coming closer to Me through performing voluntary worship until I love him so much so that I become his hearing with which he hears, and his sight with which he sees, and his hand with which he strikes, and his leg with which he walks; and if he asks Me something, I will surely give him, and if he seeks My protection (refuge), I will surely protect him".”

Shaikh Kabbani said that though many Sufis were enormously rich, they lived like the poor to have the feel of being deprived of food and money and, thus, tried to eliminate the poverty from their villages, cities and the world at large.

Shaikh Kabbani told the story of a great Iraqi Kurdish Sufi Khalid Al-Baghdadi, the founder of a branch of the Naqshbandi Sufi order called “Khalidi”, who came to India and learned knowledge from a Hindu scholar who has had a profound impact on him. He said that not only Muslims but even a Hindu can do spiritual wonders if he empties his heart of worldly desires and engages with social activities.

At the end of his speech, Shaikh Kabbani stressed the importance of giving in charity and said that we should not judge people’s morality while giving to them neither should we differentiate among them on the basis of religion caste or creed. The Programme coordinator Saida Dehlvi informed the audience that the Shaikh will be soon on his visit to the holy shrine of Hazrat Khwaja Muinuddin Chishti in Ajmer.

Shaikh Kabbani is a spiritual guide and Sufi mentor to millions around the world, including the UK, Southeast Asia and the United States. He has devoted all his life to spread the Islamic teachings of inclusiveness, peace, tolerance, religious harmony and other defining principles of Islamic spirituality known as Sufism.

Born and brought up in Beirut, Lebanon, Maulana Shaikh, Dr. Shaikh Kabbani is an America-based Sufi Islamic scholar and is actively engaged with his profound mission of strengthening Islam’s spiritual foundations and rendering social welfare services to people of every religion, ethnicity, race, and creed. Using a framework of traditional Islamic teachings, he mobilizes local community leaders to invest in community with an aim to establish humanitarian organisations and research centres. He particularly concerns himself with intensive deradicalisation of the Muslim youth in America. Shaikh Kabbani presides over the Institute for Spiritual and Cultural Advancement (ISCA), WORDE, the As-Sunnah Foundation and eShaikh.com, which provides online guidance in matters of jurisprudence, theology and responding to requests for prayers. He is also the founder president of the Islamic Supreme Council of America (ISCA), a non-profit, non-governmental educational organisation dedicated to teaching personal moral excellence. 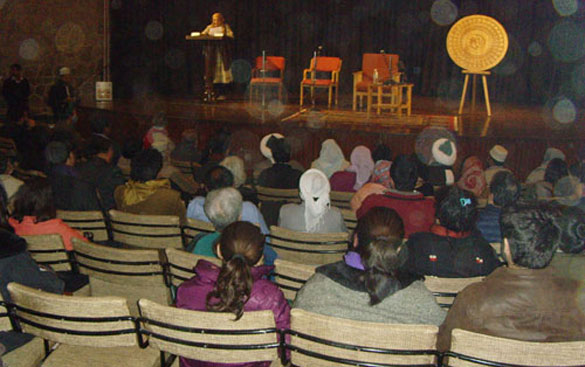 Presently, he is on a visit to India as part of activities organised by the Sufi-oriented Indian Muslims in observance of the holy month of Rabiul Awwal (the ongoing Islamic month in which the Prophet Muhammad PBUH is reported to have been born). Till now, he has attended a series of spiritual programmes in various parts of India. One of such thrilling spiritual gatherings was held at the India International Centre, New Delhi under the title:  “Love: The Sufi Foundation for Bliss” as part of lectures by Shaikh Hisham Kabbani.

The talk was introduced by Sadia Dehlvi, renowned media person, social activist, Sufi writer and author of the book “Sufism: the Heart of Islam”. She threw some light on the Sufi orders deeply rooted in India and particularly in Delhi. She said that Delhi has been the centre of nearly all Sufi orders and traditions since 13th century, as the mainstream Muslims in India subscribe to the Sufi ideology. Highlighting the glorious aspects of the Naqshbandia Sufi order to which Shaikh Hisham Kabbani belongs, she said that Naqshbandia Sufis, as the Shaikh Kabbani himself, are particularly known for their broader outlook of religion, untiring charity works, providing assistance for the poor and building orphanages. She also cited some orphanages run by Shaikh Kabbani in the United States.

She introduced Shaikh Muhammad Kabbani to a mixed gathering of Muslim and non-Muslim devotees of Sufis present in the auditorium. A renowned teacher of the Sufi path, she said, Shaikh Kabbani serves as a guide and teacher to millions around the world. He has spent his life spreading the teachings of peace, tolerance, respect and love – the defining principles of Islamic spirituality. Recently, Shaikh Kabbani has also issued a fatwa against the domestic violence, in addition to the fatwa against all forms of extremism, religious fanaticism and terrorism, she said. It is worth mentioning that Shaikh Kabbani has been subject to strong criticism and condemnation by the extremist Wahhabi-Salafi groups due to his standpoints and fatwas countering terrorism.

After the recitation of two English and Arabic holy songs dedicated to the Prophet Muhammad (peace be upon him), Sadia Dehlvi called the Shaikh upon the dais to deliver his talk on the given topic. One of the many celebrities present there was union minister and former chief minister of Jammu and Kashmir Farooq Abdullah.