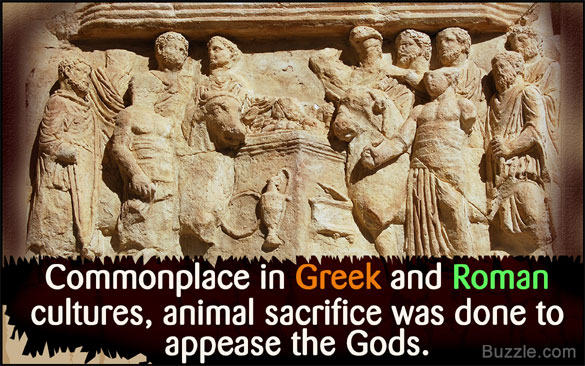 It is often asked why not spend money for purchasing animals on the needy. Many are disturbed by violence and secretly or openly advise God and believers to shun sacrificing animals on Eid or other occasions including community feast (niyaz). Pre-Abrahamic origin, mythological and mystical connectio and trans-religious and transcultural symbolism of sacrifice are either forgotten or ignored and we don’t find it being discussed in academic forms or mentioned in sermons. Anthropology, mythology and many traditional sciences are hardly known in Muslim scholarship. Sophisticated discussions by Sufi sages are also largely forgotten. A superficial critique of qurbani and prayer food culture reigns today. A few remarks are here in order to clarify. 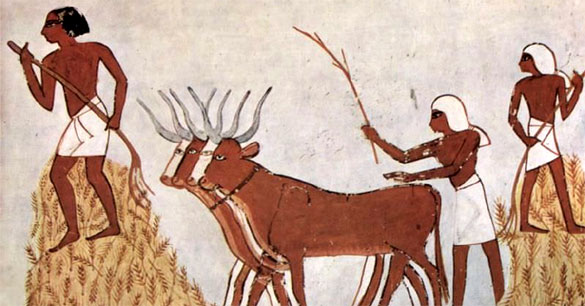 Threshing of Grain in Egypt

Kimberly Patton thus describes common features of sacrifice: “Animals are seen as active subjects from start to finish in the sacrificial process, glorified mediators between realms, whose cooperation is essential to the efficacy of the ritual, whose forgiveness is often sought from kinship groups to avert vengeance.”

According to Patton, classic sacrifice views animals as active and willing participants in their death. Human participants must seek forgiveness for the violence they perpetrate and the victim needs to be without blemishes. “The more perfect the animal (or human being, for that matter), the less it belongs to this death-dealing, corrugated mortal world, and the more susceptible it is to election as a sacrificial offering.” Gilhus has noted that Graeco-Roman sacrifice traditionally ended in a “sacred meal, which was the closing act of the sacrificial process.” For Sterckx, the communal sacrificial feast served to cement social relationships in ancient China, “The acceptance or refusal to accept sacrificial meats functioned as symbolical reaffirmation or rejection of interpersonal and interstate allegiances.” J.Z. Smith argues in his essay “Bare Facts of Ritual”: “Ritual is a means of performing the way things ought to be in conscious tension to the way things are in such a way that this ritualized perfection is recollected in the ordinary, uncontrolled, course of things.”

Reverend Toyota draws our attention to the fact increasingly lost sight of by moderns who have lost the sense of food as sacrament, an idea forcefully articulated in The Hungry Soul: Eating and the Perfecting of Our Nature and argues that the consumption of meat is not problematic per se, as animal flesh transforms into human flesh but what is problematic is when one consumes meat and is more concerned about its taste than the fact that it came from living beings. For Toyata while eating these lives we should also say, “I’m sorry” and “thank you.” That’s because we take away their lives and because we cannot live without relying on these lives. This recalls Islamic tradition’s emphasis on seeking forgiveness/expressing gratitude for almost everything we omit or commit or appropriate. Arguably our every act – from the act of consenting to be born and building a house and tilling the earth and taking its countless fruits involves certain kind of violence or is a disturbance of equilibrium. To live is indeed to injure. No wonder for traditional man seeking forgiveness and expressing gratitude for all and sundry things constitute an obligation and orchestrate his life and are keys to finding redemption for taking lives.

It is noteworthy to revisit debate on vegetarianism in Buddhism that has historically taken a very strict position and also qualified its strictures in various ways. While it is remarkable that every tradition had to contend with the hard facts of life and survival and come up with certain positions for both upholding the moral imperative inspiring vegetarianism and it is saints especially who emphasized this, the laity or general populace, generally speaking, from both Eastern and Western lands, didn’t uphold it and developed various ways of living with rather than at the cost of animals. And it is not humans versus animals but a shared trajectory of one life, a life of participation and shared destiny that confronts us in traditional worlds.

It is instructive to see how vegetarianism is received and articulated in modern Japan. As Barbara R Ambrose, to whom I am indebted for some citations here (in “Partaking of Life: Buddhism, Meat-Eating, and Sacrificial Discourses of Gratitude in Contemporary Japan”) taking note of various responses, comments, “We can’t overlook the fact that humans rely on animals in virtually every aspect of their lives—from food and leather to cosmetics and pharmaceuticals—and are unable to extricate themselves from this dependency.” In the face of “this inextricable entanglement,” the only moral option is “recognizing the sacrifice of the animals and the labour of the producers, through the expression of one’s gratitude.” Vegetarianism is accused to be guilty of prioritizing animal lives over plant lives and being a recent Western heresy. It is said to be un-Japanese and one could transpose this statement to the Islamic and ancient Vedic cultures as well.

The Buddhists didn’t boycott meat eating and elaborated the concept of pure meet as the one not intended for consumption by a Buddhist. Toyota argues that consuming meat with gratitude while uttering the words “itadakimasu” (“I gratefully partake of this food”) and “gochisōsama deshita” (“it was a delicious feast”) was what made a person human. Ambrose brings evidence to show that “Unlike earlier Buddhist discourses that stigmatized meat consumption or averted the human gaze from the slaughter, contemporary Japanese discourses propose that witnessing the killing of animals makes the consumption of meat wholesome, as long as humans avoid wastefulness and express their gratitude for the animals’ sacrifice.

Contemporary Japanese Shin Buddhism embraces a sacrificial logic as a critique of mindless consumerism. Recognizing the indebtedness of humans to animals, creates an opening for reflection that makes it possible to see animals as subjects and to de-stigmatize the labor involved in animal slaughter and the manufacture of animal-based products.”

Animal sacrifice requires sacrificing part of oneself and ideal sacrifice is one where consent of animals is sought and they embrace death, so to speak. And there are many such cases reported to which many amongst us are witnesses – the animal is told to lay down and it complies. Why is it that human ritualistic or other transgressions need to be expiated by sacrificing animals? Why is it that those intending to offer qurbani are recommended to let grow hair and nails prior to qurbani? Why is it that it is shedding of animal’s blood that is so significant traditionally and nothing on earth or other forms of helping the needy can’t substitute this?  Why is it that it is emphasized we sacrifice with our own hands and paradoxically, ideally, personally rear and develop a deep fellowship before sacrificing instead of last-minute buying from market? Development of fellowship with animals is a clue to the institution of qurbani and it is sadly lacking in our case when most animals are factory farmed and we don’t spend even few hours with animals and don’t know the special blessing of sacrificing with our own hands.

We have also forgotten pervasive animal symbolism and angelic associations with animals and don’t know how intimacy with animals is a healing and an education and why it is said that troubles from the above are taken up by animals we rear and if there are none, humans suffer. Animals humanize us and it is best known by farmers and butchers who truly care about the art of rearing and slaughtering.

Opposition to ritual slaughter from certain religious (such as Buddhist) and secularist quarters isn’t to be summarily dismissed. Its use is to critique extreme literalism and underscore the point that to God doesn’t reach blood and flesh besides showing relative value as against the absolute one and contextual significance of animal sacrifice. Islam has had wide variety of attitudes towards animals and animal sacrifice which are usually brushed aside.

For instance, note the case of Ibn Arabi who maintains that “dumb beasts possess an exalted knowledge and understanding from God, and he concludes that anyone who considers himself superior to the beasts is ignorant of his own situation.” Ibn Arabi has also meditated on what he perceived as misreading of dream by Abraham (AS) and one can build on him and other seers to see how animals/heroes and their communities are truly saved through qurbani. Both animals and humans are transformed and not killed through sacrifices.

Post Script:  Having made these points, let it be made clear that traditional setting and attitudes and saving power of symbols have largely gone. It is not easy to see how we revive the spirit of an institution that Abraham exemplified and didn’t initiate as it existed prior to him.

Those who insist on qurbani thinking it is an obligation for every individual who can afford it (rejecting majority view of it as sunnah to which salvation can’t be linked) but don’t develop fellowship with animals or don’t care about how animals were farmed and other ethical and environmental aspects or costs involved and go for sacrificing multiple number of animals as a status statement (as is true for majority of elite who outsource everything from rearing to slaughtering to distributing) while being callous to the needy neighbours fail to be redeemed. It is fellow feeling and caring for the other that is salvific and qurbani is a means for that end and not an end in itself and that is why public interests or other reasons could modify choice of going for qurbani. It can be argued that in our setting, keeping in view objectives of shariah, the letter and spirit of qurbani are better realized if extended families rather than individuals do it and in the time of Corona, it is done through organizations  that ensure prevention of spread of disease by butcher and later distribution of meat. Those who understand origin, development and ramifications of the institution of animal sacrifice see how one can choose between various legal views on it (from Wajib to Sunnah, from family to individual basis of doing it, from individual to community as centre of organizing it and as beneficiary) and how far it has succeeded in sacrifice of the self for the non-self and if one has participated or not in higher redeemed life thanks to it.

Philosophers of major traditions have not conceded the argument that animal sacrifice is non-ethical. Anthropologists find its evidence almost everywhere and its counterparts in secularized culture. Philosophy has been defined as preparation for death.  Sages, philosophers and psychoanalysts have found dialectics of the divine names Wudud/Muhiyy and Mumeet or God of love and God of death that ground life and death drives, eros and thanatos as key to the drama of life and culture. We are born astride the grave as Beckett character puts it.  The last words of Socrates were “Crito, we owe a cock to Asclepius, pay it and don’t forget.” (Asclepius was the God of health and poisoning was release from dis-ease called life). Not just ancient and medieval philosophers but postmodern philosophers and writers down to Blanchot have meditated on violence and death that call for rethinking simplistic vegetarianism and pacifism as applied to the web of life. Encountering death humanizes.  Fleeing death as modern man does as is glaringly shown by corona scare is a sign of decadence.

To conclude with  Heidegger’s description of human condition as being-towards-death and his advice to keep visiting graveyards and Blanchot, whom he influenced,  about death that it is “a power that humanizes nature, that raises existence to being, and it is within each one of us as our most human quality.”