A Churail Is In Fact the Ultimate Feminist Icon

I could tell who she was from her wicked giggles. No respectable woman laughs like that. As I walked further from my village on that dark moonless night, her peals of laughter rang out. She was following me. I was on a narrow, deserted path between two fields. She was close enough for me to hear her panting breath and the bells jingling on her broken, twisted ankles. She wanted me to turn around, to look at her crazed, bloodied face, her tangled hair. But I knew I mustn’t. She would have me then. My heart was hammering, but I forced myself to walk on, to not show fear. All the while, I was reciting the Quran under my breath, begging Allah to protect me from evil. Just as I thought she was going to pounce, two things happened. The moon came out from behind a cloud and the lane opened up onto a road where I could see people walking ahead of me. I hurried towards them and at once she fell away, slinking back into the shadows from where she’d come.’ 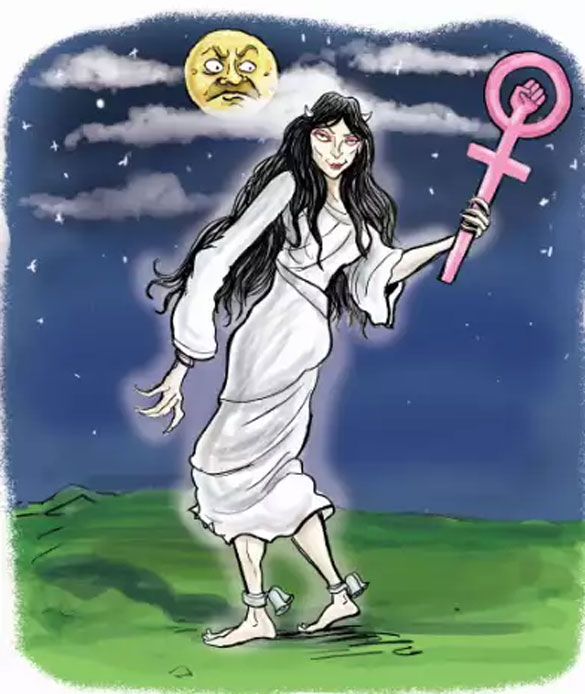 I heard this story as a child from my parents’ driver. He didn’t need to tell me who his pursuer was. I’d grown up hearing stories of Churails.

They were women of indeterminate age with chalky faces and mouths smeared with blood. They had wild staring eyes, long loose black hair and minimal clothing. And of course those giveaway feet that pointed backwards.

My old ayah, otherwise an ardent foot soldier of the patriarchy and a fervent believer in Churails, Dayans and Jinns, did however provide some reassurance. Evil though they were, she told me that Churails didn’t harm little girls.

They don’t harm big girls either, as I discovered many years later, when doing some cursory research on Churails. In fact, the only people Churails and Dayans, their demon sisters harm, are men. What is often omitted from accounts of their gratuitous malevolence is that they are the spirits of innocent women who have been killed by men, most often their husbands, fathers or brothers. They are the undead who have returned to take vengeance on all men on behalf of wronged women.

Most cultures have their own version of these bad girls. The witch of Endor appears in the Bible; sorceresses in the Torah; Circe in Greek mythology; Baba Yaga in Russian folklore. Aside from not providing a son for her fat, petulant husband, among Anne Boleyn’s many listed crimes that justified her beheading, was also that she was a witch. They may have different physical attributes but all witches, Churails, sorceresses, call them what you will, share a core agenda: they harness other worldly power to control men. That they are all malevolent is a given. Naturally. Churails, while being frightening figures, also have intense sexual allure. The driver didn’t turn around because he knew if he once locked eyes with his tormentor, he would not be able to resist her feral magnetism.

A Churail’s loose hair signals her depravity. Loose hair in Desi culture has sexual power, which is why a respectable woman must keep hers confined in a tight plait or bun and preferably covered with a sari Palloo or Dupatta. The only man who is allowed to touch her hair is her husband. No one else may enjoy that intimacy. My two grandmothers, who’d never allowed a pair of scissors anywhere in the vicinity of their hair, were appalled at the thought of male hairdressers. In their minds it was one step short of adultery! So when my mother took the radical step of having her hair cut short — she was married and the mother of three children by then — my grandmother was horrified. ‘You should’ve had your nose cut at the same time!’ she snapped.

So a woman who deliberately leaves her long hair loose. Declares her independence of the rulings of polite society. Her sexuality is untrammelled, uncontrolled, her own. In short: my body, my choice. 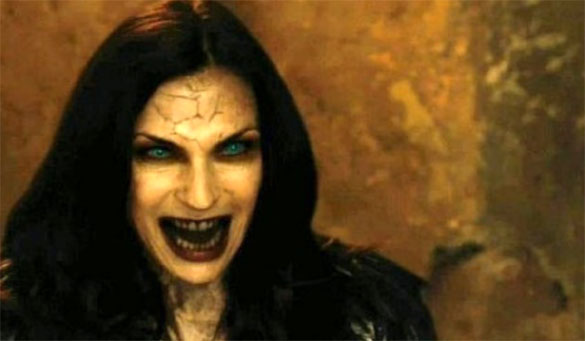 Churails don’t live in tidy towns. Barefoot, bareheaded, half naked, they haunt desolate places because they are not subject to the stifling strictures of a society that decrees that women must be decent, submissive, domestic. Like wild animals, Churails are children of nature, they are free spirits who go where they wish, do as they will. They are a law unto themselves. Men can’t kill them, because they’re already dead. They can’t threaten them because a Churail has nothing to lose. Dangerous, powerful, uncontrollable, a Churail is the patriarchy’s worst nightmare.

As a young girl, I thought that being called a Churail was an insult akin to a bitch. But now I welcome it for, Churails are symbols of feminine power, of freedom, of fierceness. A Churail is in fact, the ultimate feminist icon.

Moni Mohsin was born and raised in Lahore. Author of the best selling social satire, Diary of A Social Butterfly and Tender Hooks, she is currently based in London.