How They Came To Choose Islam

Philip and Sherry Snow grew up Catholic in predominantly Christian towns on opposite sides of the country. Today, Philip and Sherry go by Ibrahim and Safiye, live on the North Side with their four children -- and are devout adherents to Islam.

When Sherry met Philip, a convert to Islam, online in 1996, she had been questioning her Catholic faith but had no interest in learning about his religion.

"I went through the whole gamut of stereotypes that I'd heard about Muslims," she said. But as she learned about Islam from Philip, she realized not just that her preconceptions about the religion were wrong, but also that Islam filled the gaps she perceived in Christianity. 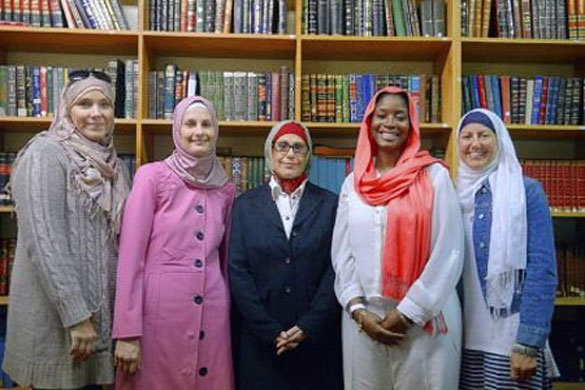 From left, Orenda Dadkhah of West Mifflin, Lauren Simmons of Beechview, Julie Webb of Squirrel Hill, Tara Bailey of Sheridan and Kathleen Sciortino of Crafton stand inside the Islamic Center of Pittsburgh in Oakland

Mr. Snow, who works as an arborist, and Ms. Snow, a graphic designer, are two of a large and diverse community of Muslim converts in Pittsburgh. This week, the holy Islamic month of Ramadan will draw to a close, calling for increased piety from Muslims around the world.

Muslims believe that God revealed the Quran to the prophet Muhammad on one of the last 10 nights of Ramadan. For many converts, successful completion of the obligation to fast during Ramadan is one of the most tangible changes in their transition to Islam.

"I officially converted when I completed Ramadan correctly," said Julie Webb, outreach coordinator at the Islamic Centre of Pittsburgh.

Though it is difficult to track precise rates of conversion to Islam, about 20 percent of American Muslims are converts. Converts come from a variety of religious and cultural backgrounds, and most report that Islam agreed with them on a deep, intuitive level.

"It didn't take me long to realise that Islam was nothing that I thought it was. As I started learning more, I realised Islam appealed more to what I already believe about God," Ms. Snow said. "Being raised Catholic, they teach about the Trinity, and the Trinity never resonated with me. It never made sense. When I found out Muslims believe God is just one that made more sense to me."

After three years learning about Islam from Mr. Snow, reading the Quran and learning about other belief systems, Ms. Snow knew that Islam was the one that agreed with her understanding of the world.

She recited the Shahadah, a declaration of belief in the oneness of God and acceptance of the prophet Muhammad as his messenger, on Halloween 1999. For non-Muslims, public profession of the Shahadah signals one's conversion to the faith, and many take an Islamic name at the time of their conversion. Ms. Snow used the name Safiye along with her given name.

After her conversion, Ms. Snow flew from New Jersey to California to meet Mr. Snow for the first time. Within a week, they were married.

Mr. Snow, who converted to Islam six years before his wife, had been learning about the faith for more than a decade from Muslim friends and Quran study. The first time he learned about Islamic beliefs, from a Libyan friend, the religion immediately resonated with him.

"We were driving through Utah at around 1 in the morning, and when I asked him what the dominant faith in Libya was, he started talking about Islam. It was that night that my heart embraced Islam. I was so thrilled at what he was telling me. I let out a laugh of release. I laughed out of comfort and joy at what he described to me," he said.

Like his wife, Mr. Snow found in Islam answers to questions that Christianity could not provide to him. "Whenever I asked questions [about Christianity], I noticed there was an agitation, a frustration. Oftentimes they would get angry at me for posing a question. Muslims were never irritated by questions," he said.

Historically, Pittsburgh has been no stranger to Islamic conversion. In the 1930s, Muslim converts established the First Muslim Mosque of Pittsburgh, one of the first mosques in the United States to be founded by converts.

"Pittsburgh has a great history of conversion to Islam," said Patrick Bowen, who specializes in Islam in the United States at the University of Denver. "African-American Sunni mosques mushroomed in the middle of the 20th century, and Pittsburgh was the main centre. The largest concentration [of Muslim converts] was in the Western Pennsylvania and Eastern Ohio region."

The majority of American Muslim converts are African-American. Today, the First Muslim Mosque of Pittsburgh is one of many mosques in the Pittsburgh area that serve predominantly African-American converts, said Salaah Brooks, who has served as the mosque's imam, or religious leader, since 1999. The mosque adheres to Salafism, an orthodox strain of Islam.

"I was 14 or 15 when I converted. I felt a spiritual void, and I began learning as much as I could about God. ... After speaking with Muslims, it became clear to me that that was the void I was trying to fill," Imam Brooks said.

"We believe that every person is born with an innate knowledge that Allah is their creator. Hence, his exclusive right to be worshipped alone. So converting to Islam is almost like a coming home feeling. ... It gave me a great sense of tranquility and peace and helped stabilize my life," he said.

Imam Brooks' family was supportive of his transition to Islam, due in large part to the positive effects his faith had on his life. Eventually, his mother converted, too.

"Islam is not a strange faith in the African-American community," said Imam Brooks. "A person who converts often has an uncle, a cousin, someone in their family who has converted."

"Islam has a very strong social justice message that many African-American converts are attracted to."

Other converts have chosen to attend mosques that serve primarily immigrant and non-convert communities, including the Islamic Center of Pittsburgh, the largest mosque in the region.

"The international component of Muslims in Pittsburgh is unmatched," said Ms. Webb. Many larger cities have Muslim communities large enough for particular ethnic groups to form their own mosques, Ms. Webb said, but Pittsburgh is just small enough that mosques like ICP draw people from a wide spectrum of nationalities. And because Islam is one of the largest and most diverse religions in the world, integration has proven both rewarding and confusing for new converts.

"Because there are so many different cultures in Islam, there are so many beautiful rituals that come out of them, you have to be confident enough to ask the imam if it's something you really have to do. It takes time to navigate through all the different cultures. ... A convert needs to understand what it means to be involved with an international community of believers," Ms. Webb said. "You have to have an anthropological heart."

Converts have strived not just to integrate with native-born Muslims, but also to gain acceptance from friends, family and strangers.

"I noticed when I became Muslim, my friends started kind of distancing themselves from me," Ms. Snow said. "I was sad and figured if they were uncomfortable with that, they didn't really know me. When I put on the head scarf to show my devotion, other people revealed their true selves.

"When 9/11 happened, it was scary for a little while. People were reacting explosively. One time when I was driving two guys pulled over next to me and made an exploding sound in my window. I had to modify my dress so that I just wore a hoodie and it was not obvious that I was a Muslim woman on the road," she said.

"I went into an interview with one employer who at the end said, 'Will you wear that thing on your head every day?' But honestly, I don't want to work for those kinds of people. I was glad I had my scarf on. He obviously wasn't judging me on my ability," she said.

But asked whether the events of 9/11 and the prejudices of others affected their devotion, converts said emphatically that they did not. "I did not see the geopolitical concern in any way having to do with my faith. It's disturbing to all Muslims I know to hear of the acts done in the name of Islam," Ms. Webb said.

"I haven't found anything to waver my faith once I realized what Islam had," Ms. Snow said. "It's not that I'm not learning about what other people believe, but I've never found anything stronger."

"There's plenty of times I don't feel like an outstanding Muslim. I feel I probably don't worship as much as I could, am not as patient as I could be," she said. "Islam is perfect -- Muslims are not."