Eating the Sun: A Lovely Illustrated Celebration of Wonder, the Science of How the Universe Works, and the Existential Mystery of Being Human

“I’m stricken by the ricochet wonder of it all: the plain everythingness of everything, in cahoots with the everythingness of everything else,” poet Diane Ackerman wrote in her Cosmic Pastoral, which so enchanted Carl Sagan — her doctoral advisor — that he sent a copy of the book to Timothy Leary in prison. “Wonder,” Ackerman observed nearly half a century later in her succulent performance at The Universe in Verse, “is the heaviest element in the periodic table of the heart. Even a tiny piece of it can stop time.”

That ricochet wonder, in its myriad kaleidoscopic manifestations diffracted by various scientific phenomena, reflected by various facets of this splendidly interconnected universe, and hungrily absorbed by the human heart, is at the center of Eating the Sun: Small Musings on a Vast Universe (public library) by Ella Frances Sanders — the boundlessly curious writer and artist who gave us Lost in Translation, that lovely illustrated dictionary of untranslatable words from around the world. 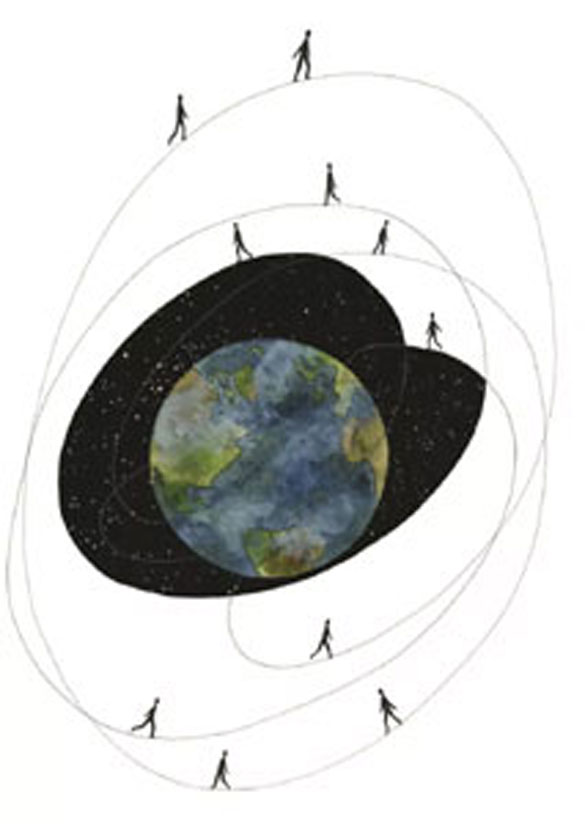 Sanders writes in the preface to this lyrical and luminous celebration of science and our consanguinity with the universe:

A sense of wonder can find you in many forms, sometimes loudly, sometimes as a whispering, sometimes even hiding inside other feelings — being in love, or unbalanced, or blue.

For me, it is looking at the night for so long that my eyes ache and I’m stuck seeing stars for hours afterwards, watching the way the ocean sways itself to sleep, or as the sky washes itself in colors for which I know I will never have the words — a world made from layers of rock and fossil and glittered imaginings that keeps tripping me up, demanding I pay attention to one leaf at a time, ensuring I can never pick up quite where I left off. 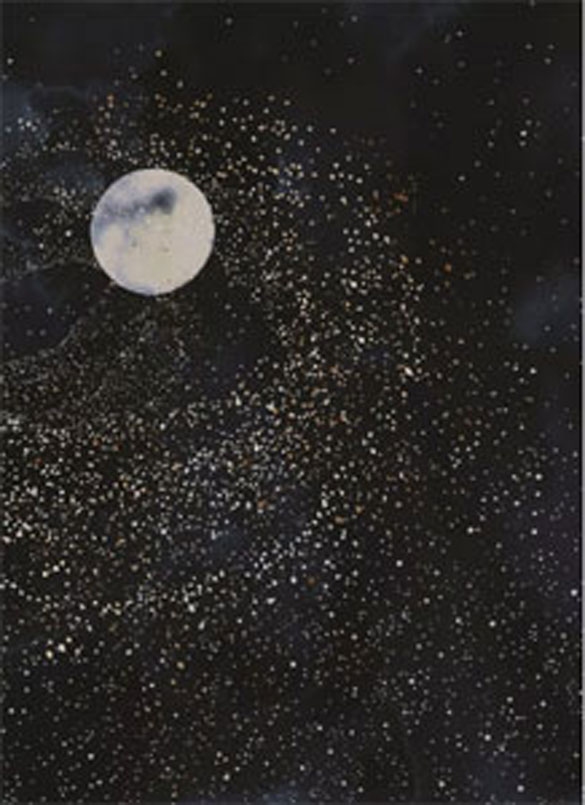 With an eye to the miraculous absurdity of our existence — we only exist by chance, after all, in a universe governed by chaos and predicated on impermanence — Sanders writes:

When one is considering the universe, unseen matter, our small backyard of the stuff, I think it is important, sensible even, to try and find some balance between laughter and uncontrollable weeping.

Cry because we cannot even begin to understand how beautiful it is, cry because we are terribly flawed as a species, cry because it all seems so shockingly improbable that maybe our existence could be nothing but a dreamscape — celestial elephants in rooms without walls. But then? Surely, we can laugh.

Laugh because being riddled head-to-toe with human emotions while trying to come to terms with just how indisputably tiny we are in the grand scheme of things, makes absolutely everything and everyone seem quite ridiculous, entirely farcical. We have heads? Ridiculous! There are arguments about who is in charge here? Ridiculous! The universe is expanding? Ridiculous! We feel it necessary to keep secrets? Ridiculous. 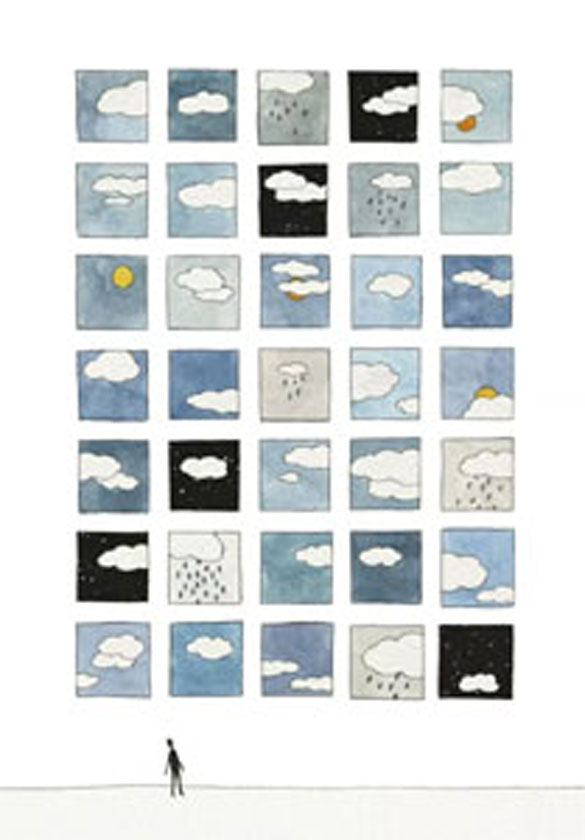 In fifty-one miniature essays, each accompanied by one of her playful and poignant ink-and-watercolour drawings, Sanders goes on to explore a pleasingly wide array of scientific mysteries and facts — evolution, chaos theory, clouds, the color blue, the nature of light, the wondrousness of octopuses, the measurement of time, Richard Feynman’s famous cataclysm sentence, the clockwork mesmerism of planetary motion, our microbiome, the puzzlement of why we dream. What emerges is something sweetly consonant with Nabokov’s exultation at our “capacity to wonder at trifles” — except, of course, even the smallest and most invisible of these processes, phenomena, and laws are not trifles but condensed miracles that make the everythingness of everything we know.

It is tempting, then — and Sanders succumbs to the temptation in a most delicious way — to seek the existential in the scientific, even if the thread between the two is slender and human-made, rather than woven by this vast unfeeling universe in which we warm ourselves with wonder. In a chapter on our organic composition, so memorably captured in Carl Sagan’s assertion that “we too are made of starstuff,” Sanders shines a sidewise gleam on the illusion of the solid and separate self:

Depending on where you look, what you touch, you are changing all the time. The carbon inside you, accounting for about 18 percent of your being, could have existed in any number of creatures or natural disasters before finding you. That particular atom residing somewhere above your left eyebrow? It could well have been a smooth, riverbed pebble before deciding to call you home.

You see, you are not so soft after all; you are rock and wave and the peeling bark of trees, you are ladybirds and the smell of a garden after the rain. When you put your best foot forward, you are taking the north side of a mountain with you. 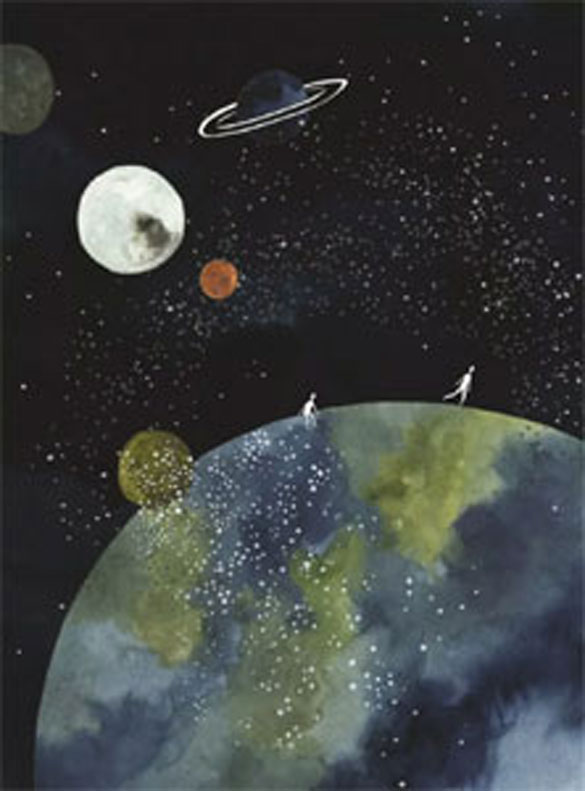 Sanders revisits the subject through the lens of the physics beneath the chemistry in a chapter on the structure and discovery of the atom. In a passage evocative of physicist Alan Lightman’s wonderful explanation of why we are mostly restlessness and empty space, she writes:

Such a beautiful (and until recently invisible) idea, the importance and unavoidable nature of atoms, one that seems to put everyone and everything on a satisfyingly level playing field. Your good and bad decisions, your wingspan, your wholeness as a person — these are all possible because of your own 7 billion billion billion atoms, each one made up of (roughly speaking) a positive nucleus in the middle, and the negative electron cloud surrounding it — a cloud that sort of dances from side to side, alternately enchanting other atoms and pushing them away (the really complicated magic can be left to quantum mechanics). Without atoms, nothing would be here; not the book in your hands, not the pen that leaked into your pocket this morning, not those buildings that are enough to make you scared of heights, nothing. If it weren’t for atoms, there wouldn’t be mass, or molecules, or matter, or me, or you. 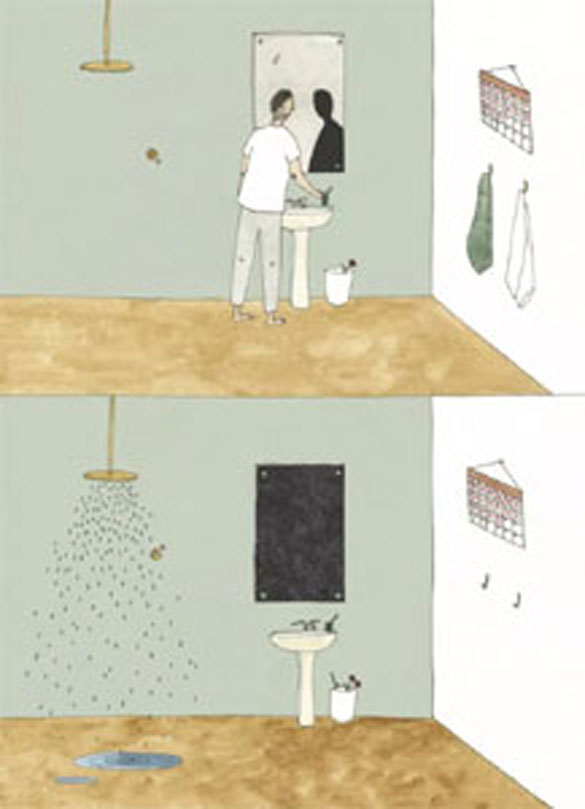 The irrepressible human inquiry that magnetizes our imagination and draws us to the inner workings of the universe is the same inquiry Tolstoy scrawled into the diaries of his youth: “This is the entire essence of life: Who are you? What are you?” Sanders weaves these elemental questions — what are we made of and what does that make us? — into nearly every scientific curiosity she picks up, but she addresses them directly in a chapter devoted to our strangely continuous sense of self, devoid of a physical basis of continuity. She writes:

The idea of an unchanging “you” or “self” is inherently fraught with confusion and conflict, and if you consider the topic for too long it can begin to feel clammy, almost suspect. An apparent string running through all the previous versions of you — the one five minutes ago, a few hours ago, several years — the idea of “self” inevitably gets tangled up in things like the physical body and appearance, like memory. It’s clear that you cannot pin yourself down as any one particular “thing” but rather that you resemble a story line, an endless progression, variations on a theme, something that enables you to relate your present “self” to the past and future ones. 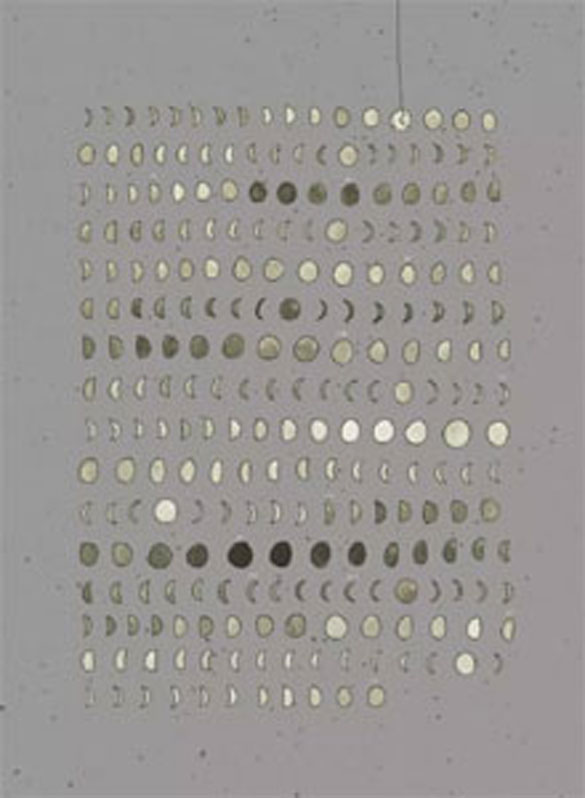 Echoing the great neurologist Oliver Sacks’s recognition of narrative as the cognitive pillar of personhood, she adds:

We do seem to make sense of ourselves and the world as a part of a narrative — we think in terms of main characters, those we speak and interact with, and where the beginnings, the middles, and the endings are.

Radiating from the book is lucid, lyrical consolation for the elemental disquietude of existence — the fact that haunting the fundamental laws of the universe and the sturdy certitude of their mathematics is the daily chaos of uncertainty with which we must somehow live, keeping one eye on our greatest loves and greatest losses, on the trifling urgencies of the mundane, and the other, wincing, on the only certainty there is: that one day we shall cease to exist. Sanders writes:

A lot of our time is spent trying to tie up loose ends, trying to shape disorder into something recognizably smooth, trying to escape the very limits that hold us close, happily ignoring rough edges and the inevitable. We separate ourselves out into past, present, and future, if only to show that we have changed, that we know better, that we have understood something inherent; if only to draw neat lines from start to finish without looking back.

The problem is that chaos is always only ever sitting just across the table, frequently glancing up from its newspaper, from its coffee cup filled with discolored and imploding stars. Because chaos too waits. Waits for you to notice it, for you to realize it’s the most dazzling thing you’ve ever seen, for all of your atoms to collectively shriek in belated recognition and stare, mouth open, at how exquisitely embedded it is in everything. Because we are not designed to be more orderly than anything else; seams have a tendency to come apart with time — you and the universe are the same in this way, which makes for a delicately overwhelming struggle.

So, then, if you can’t ever end things neatly, can’t ever put them back quite the way you found them, surely the alternative is to remain stubbornly carbonated with possibility, to never rest from your rotation. To keep assembling stories between us, stories about how everything was everything, about how much we loved.