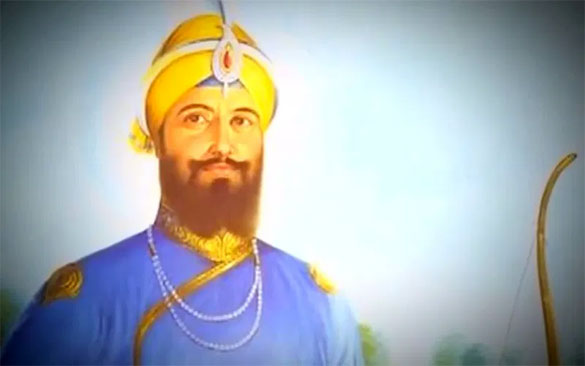 “He Alone Is Known As a Spiritual Hero, Who Fights In The Defense of Righteousness, He May Be Cut Apart Piece By Piece But He Never Leaves The Battle Field”

We need to prepare ourselves to even understand the greatness of Guru Gobind Singh Sahib. The world has never seen a man, a divine messenger, a warrior, a prophet, a poet, an emperor as great as Guru Gobind Singh Ji. He is often revered as Sarbans Dani (Merciful Donor, who sacrificed his all), Mard Agamra (Man without any parallels), Badshah-E-Darwesh (Emperor and Prophet), amongst others. Many historians have tried to contemplate upon his life and have concluded that there is no one in this world who lived a life as inspiring as Guru Gobind Singh Sahib. In just a short span he led the foundation of a Panth which in times of great peril stood up for Justice and still continues to serve and sacrifice their lives for humanity. The Khalsa Panth opposed to all political authority based on injustice, oppression and exploitation.

Allah Yaar Khan, a Muslim poet, wrote many couplets on the greatness and sacrifice made by Guru Gobind Singh Sahib.

“I have never seen such rare deeds done out of love (about Guru ji sacrificing his everything), What to say of seeing, I haven’t even heard about them ever”

There is no instance other than this in the world where a Prophet-Warrior sacrificed his generations for the sake of humanity. Guru Sahib fought more than 17 battles in his lifetime, against oppression, tyranny but not one battle was for territory or worldly power.

In the year 1666, Guru Gobind Sahib was born to Mata Gujri Ji in Patna Sahib, Bihar. It is said that upon birth of the splendid divine light, Pir Bikhan Shah, a Muslim Mystic residing in Ambala, Punjab, guided by this divine light started travelling to Patna Sahib. It was here that Pir Bikhan Shah approached Guru Gobind Sahib with two bowls of milk and water symbolizing Hindus and Muslims. Guru Sahib placed his hands on both the bowls. The mystic bowed down with reverence and the world got the message that a prophet for all humanity has taken birth.

After his birth Guru sahib spent his childhood in Patna Sahib. When he was 9 years old a batch of Kashmiri Pandits led by Kirpa Ram visited his father, Guru Tegh Bahadhur Sahib seeking refuge and help against the religious persecution and oppression by the Mughal Empire. How often you have seen or witnessed a nine-year-old son asking his father to sacrifice his life for humanity. Just imagine the relationship between a son and a father. It was Guru Gobind Singh Ji who requested his father to defend the faith of Kashmiri Pandits.

On the day when his father, the ninth Guru, Guru Tegh Bahadhur Sahib sacrificed his life protecting the faith of others and for human freedom, the tenth master, Guru Gobind Singh declared that he will create a Panth (Community) which would challenge the tyrant rulers, fight for the downtrodden and stand up for Justice. He created a breed of warriors out of poor working class. These warriors were different. They were born out of love for the Guru, they had a code of conduct, they were not created for revenge but for Justice.

Guru Nanak Sahib founded Sikhism with a plebeian mission. A mission where the downtrodden, and weak would one day become masters and kings – “Nanak Raaj Chaaleya, Sach Kot Sataani Neev De”. Over 200 years each Sikh Guru carrying the divine light of Guru Nanak slowly developed the Panth to the day when Guru Gobind Singh Sahib finally institutionalised it as Khalsa.

In 1699, Vaisakhi Day, Guru Sahib founded the Khalsa Panth at Takht Sri Kesgarh Sahib, the blessed fort of uncut hair. All castes became one, women were treated equal as men, poor and downtrodden were blessed with Sovereignty and Royalty. Guru Sahib created warriors, scholars just like himself. The world had never witnessed an institution of this sort. Men were given the surname “Singhs” and women were blessed with the surname “Kaurs”. It was something very unique in world history. With the revelation of Khalsa Guru Sahib gave women the opportunity to live free of the chains of a dogmatic society. Sikh history has many instances where women can be seen leading men in battles. Mai Bhago, the valiant Sikh warrior was the inspiration behind the bravery of the 40 liberated Sikhs who had deserted Guru Gobind Singh Ji in the battle of Anandpur Sahib. She led them to the battle of Mukhtsar where all 40 Singhs attained martyrdom. They were now called as “Challi Muktey” She later served as the personal bodyguard of Guru Gobind Singh Sahib.

Guru Gobind Sahib was without Nirvair (Without any differences) and Nirbhau (Hatred). This can be reflected through the instance from history when Guru Sahib allowed Bhai Kanhaiya Ji to offer water and medicine to both enemy and friends on the battlefield of Anandpur Sahib. Guru was so humble and compassionate that his arrows had tips made of gold. This was done so that the families of the men killed or injured would be cared for after death, or pay the healing cost.

Guru Gobind Singh Sahib sacrificed his beloved sons for righteousness and humanity. Mind boggles to understand how children of such young age had the courage, bravery to choose death and always remained focussed on their mission to uphold the principles of Sikhi. The younger sons of Guru Gobind Singh Sahib, Sahibzaada Fateh Singh and Sahibzaada Zorawar Singh were tortured and bricked alive in Sirhind, Punjab whereas two elder sons attained martyrdom in the Battle of Chamkaur. It’s the same battle where 40 valiant Sikhs fought an army of over 10 lakh.

While describing the importance of the land of Chamkaur, Allah Yaar Khan Jogi penned these immortal lines in his historical account.

“There is only one place of worship in this part of the world where a father sacrificed his sons for humanity”.

The world has never seen a Saint-Warrior like Guru Gobind Singh Sahib. He was always in Chardi Kala (High Spirits). After many days of battles at Chamkaur Sahib, where his elder sons attained martyrdom, Guru Sahib finally reached the Jungle of Machivara.

His family was separated, his sons had sacrificed their lives, but still in this state he was longing to meet the beloved.

“My Beloved Should Know In Which State I’m”- Guru Gobind Singh Sahib.

Apart from being a Saint-Warrior, Guru Sahib was a well-read person. He was well versed with Persian, Arabic and other languages. His writings reflect the message of oneness and universalism.

the world in areas affected with war and natural calamities.

“Guru Gobind Singh Sahib knows the ways of God, He is a Emperor and a Prophet”

The court of Guru Gobind Singh Sahib was one of its kind. It was an open court where poets, warriors, scholars, men and women from all class, kings used to sit together.

Kanwal Singh is a columnist and a Sikh Activist.