St. Moses the Ethiopian - From a Life of Violence and Crime, To a Life of Making Peace

St. Moses the Ethiopian has become a much loved saint. It is easy to be inspired by his story. Once a runaway slave, he found himself involved with and leading a gang of robbers. Eventually, trying to hide from authorities, he came upon a monastery in which he found welcome, and with it, a newfound faith in God. He not only converted to the Christian faith, but through dedication and effort, he was to become a leader in his monastic community. He went from a life of violence and crime, to a life of making peace, not only for himself, but for others as he encouraged them to imitate him in his peace-making activities. 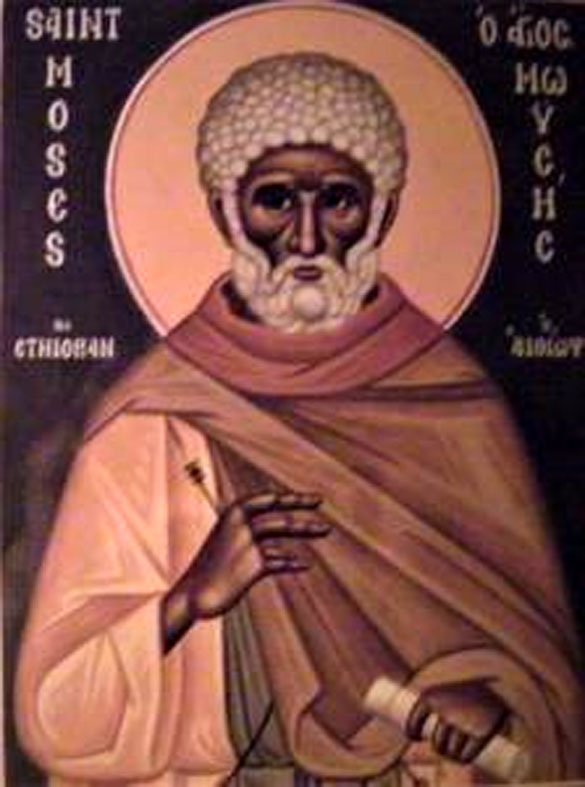 We might imagine that he had great will-power, making the conversion process easy, as if he just stopped doing what he did and found it easy to engage monastic discipline. Nonetheless, the reality was much different. Initially, he found it very difficult. He struggled greatly with himself and his desires. It took several years for him to find the peace which he wanted. Indeed, he almost gave up, as Palladius was told when he met with Moses:

Then demons attacked this Moses, trying to draw him back into his old ways of intemperance and impurity. He was tempted to such an extent, so he told us, that he nearly failed in his resolution.[1]

Great saints like Moses the Ethiopian were great, not because they faced no temptations, not because they never gave in to temptation when faced with it, nor because they never did any great wrongs in their lives,  but because, once converted to the faith, they never quit trying to do what was right. Saints  really are like all of us. They were sinners who needed God’s grace.  Some, at least in one point of their life, were great sinners. Moses himself would be the first to have said that was true to him.

We can only imagine the kind of life Moses had while he was a brigand. We can  imagine the harm he had done to others. We can imagine the selfishness and the pursuit of pleasure which he was focused on during those years. Nonetheless, when great sinners see through their sins and repent, they receive great mercy and grace from God. In return, they often felt even greater love, greater devotion to God than those who did not have such sins in their life. Moses was to become a man of great love because he knew what he had done. He also grew in love and devotion to God throughout his life as he saw God continuously at work with him, helping him whenever he needed such help. When he struggled with inordinate desires, with passions which he had developed from the time when he was on the run, God was at work with him, giving him even more grace than before; he did not realize this at first, which is why when he thought his passions were getting the best of him, his reaction was to embrace stricter forms of ascetic behaviour, hoping that by doing so he could repay God for the grace which he had already received:

He went back then, and from that hour he practiced asceticism more zealously, and especially in regard to food. He partook nothing but dry bread, meanwhile carrying a full burden and saying fifty prayers daily. He mortified his poor body, but continued to be consumed by fire and troubled by dreams. [2]

Mortifying himself as a desert monk did not solve his problem. For years, he tried to save himself by engaging stricter forms of monastic discipline. None of them could override his base desires. Finally, after many years of questioning himself and what he was doing, God’s grace suddenly took it all away. His struggles were ended. His bad habits were broken. The imprint they left on his mind was overridden. The struggles he faced did not cure him of his passions, but without those struggles, he would not have looked for such a cure and so would not have received it either. He had to fight the spiritual battle for himself, to confront his inner demons, to realize their strengths and weaknesses, to show that he wanted to be set free. And then, when the time was right, Moses found the grace given to him was able to coordinate and work with his efforts to fight against his own base desires and be victorious. It was not the struggle which set him free, but he would not have been set free without them either.

Thanks to his experiences, thanks to the struggles he had to go through in order to find  peace with God and with himself, Moses would be able to understand the plights of others; he showed compassion and mercy to others because it was what he had received and set him free. He knew if others had not been there for him first, if he had not found a holy man of God willing to teach him and guide him in the faith, he would have perished a criminal. Thus, he knew others could not succeed, could not find the peace they need, if all they received was condemnation. He taught mercy and forgiveness. He was unwilling to judge others for their faults so long as he knew they were honestly struggling to do what was good. He knew that he deserved condemnation for all he had done, not just before his conversion to the Christian faith, but also after, and so he thought he had no businesses judging others.

Moses’ reform held true to the very end. He became well-loved because he loved much. He went from a life of violence to a life of non-violence. Even though he had overcome his base passions,  that is, he had held them in check, they still tested him throughout his life. His final temptation was had at the time of his death. When his monastery was under attack by Berbers, instead of fleeing, he, and seven other companion stayed at the monastery. They were there, not to defend the monastery from attack, but rather to serve as witnesses of God’s mercy and compassion, even to those who would attack them in the place of their spiritual refuge. Moses felt it was the price he had to pay for the life he used to live. Jesus once said that those who lived by the sword shall die by the sword and Moses thought, because he had lived a life of violence before becoming a Christian, he should not flee from the sword when it was brought against him. He wanted to show how much he had changed. Though he was killed, he would also live on, glorified in Christ.

Moses fascinates us because of the great changes which took place in his life. But we must not forget those changes took time, and he had many great struggles in his life, struggles which almost led him to despair and give up. We, too, often feel the same in our lives. We struggle, often feeling things are not getting better. What is important is that we honestly struggle. When the time is right, the struggle will resolve itself. Then, we will realize what Moses also realized, that the struggle was important, for there is no holiness without temptation and no salvation without such struggle. Like Moses, our struggles help shape us and guide us. We must be patient with ourselves and not give up. Once we truly understand this, we will be patient, not only with ourselves, but with others, and then we will see the true fruit of our struggles being revealed.