God Does Not Withdraw; God Is Everywhere Present and Fills All Things

When we pursue holiness, we are tempted to think of ourselves as being better than we really are. Pride develops, and through that pride, become unruly towards others, trying to force them to comply with our whims. While some people might do so, those who do not receive our wrath. We become vindictive, thinking they deserve every kind of punishment which we can give them because they do not recognize our greatness. We become so absorbed by ourselves that lose sight of God.  We might not notice it at first. But slowly, all so slowly, his presence recedes, until at last, it is as if he is gone. Then we realize what has happened. We have received our reward. We turned away from God as we idolized ourselves, and so all that we have left is that idol which we propped up. God has left us with what we want, which is ourselves. We have lost sight of God. Thus NikitasStithatos, explains, many who begin spiritual warfare, seeking after God, lose him because of the way they engage that warfare: 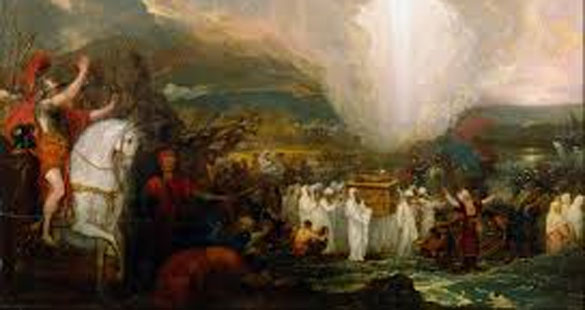 Benjamin West: Joshua Crossing the River Jordan with the Ark of the Covenant / Wikimedia Commons

God deserts those engaged in spiritual warfare for three reasons: because of their arrogance, because they censure others, and because they are so cock-a-hoop about their own virtue. The presence of any of these vices in the soul prompts God to withdraw; and until they are expelled and replaced by radical humility, the soul will not escape just punishment.[1]

In all three incidences, the spiritual seeker sets themselves up against God through their pride. Arrogance arises when people think of themselves to be so great they think others should acknowledge that greatness; undue censuring of others is a the result of people who think they are so great they can and should judge others instead of themselves; and finally, being so self-assured of one’s own virtue only indicates how far one is from true virtue, for humility will always be found in those who are truly virtuous.

God is said to withdraw from the souls of those who are attached to vices. This is because sin creates, as it were, a barrier or a veil between God and the one who sins. In actuality, God does not withdraw. God is everywhere present and fills all things. God does not change. But we change. We create the condition for ourselves as to whether or not we experience his presence. If we are prideful, if we are boastful, if we are judgmental, if we are arrogant and unruly, if we lift ourselves up and so glorify ourselves, we get so lost in ourselves, and so God is lost to us.

We should not exalt ourselves, rather, we should let God do it for us. “Humble yourselves therefore under the mighty hand of God, that in due time he may exalt you” (1 Ptr. 5:6 RSV). This exaltation from God comes through our union with him. Its source and foundation is God himself. When we humble ourselves, we cast aside the veils which hinder God’s presence from our lives. Then God can arise and his enemies, that is, all our sins, can be scattered. Having nothing left to separate ourselves from God, we will find ourselves united with him, and in that unity, we will know true glory, a glory which pride tries to imitate but fails to achieve because of the infinite distance between created and uncreated glory.

Just as seasickness is due, not to the sea’s nature, but to the already existing disorder of the body’s humours, so the soul’s confusion and turmoil are due, not to the beauty of the countenance in the person that it perceives, but to its pre-existing evil disposition. [2]

The same problem which causes us to lose sight of God causes us to also misinterpret others; we lose sight of who they are and we see them, rather, for how our sinful inclinations makes us perceive them. Everywhere we go, everywhere we look, we see our own internal disposition, our own unconscious tendencies, reflected back at us. That is, our concupiscence influences how we relate to others. And insofar as we reify ourselves in pride, insofar as we glorify ourselves and revel in that self-made glory with arrogance, we will never be able to see through the veil of sin and the horrors which it establishes for us in our lives. This is the punishment which we make for ourselves. So long as we reify the self, as it is with all its concupiscence, we create our own hell; to overcome that concupiscence, to destroy the unconscious tendencies which lead us away from God, we must overcome the self in which they are found.

Of course, we cannot do this alone, for if we try, we will only find the ego which we destroy in one moment reveal itself in a new form within us in the next moment. That self, which we thought we killed, reincarnates, creating a new form for itself to misdirect us and lead us away from God. It will not necessarily be in the same form. It will give us new, desires, and place between us and God, and those around us, different kinds of veils than those which were there before. So long as our focus is on ourselves by ourselves, no matter how much we try to eliminate the self, it finds a new way to come back, perhaps greater than before. We need outside help. Thus, we need grace; we need the purifying fire of God’s love. To experience that love, we must turn to love and walk the path of love ourselves. Love will meet love. Our love will connect itself to God’s infinite love. Then, and only then, can the self be cast off, put to the fire of God’s love, and the veils will once and for all be taken down. We will have no self to hold to in order to be arrogant, no self to hold to in order to be prideful, and so no self to put between us and God, because we are so focused on love, we will lose sight of the self, and so no longer seek to be attached to it.