When a man kills a fellow being, he does so for many reasons. It could be because he is overcome by hatred or because he wants revenge or maybe he kills for greed. Sometimes he does it in a fit of passion. And when he belongs to a religious order or fringe group, he is so radicalised by a political or revolutionary ideology that he slaughters others swayed by bigotry. Then there are the wars fought over misplaced nationalism, unleashed by leaders intoxicated with power, which take thousands of innocent lives. 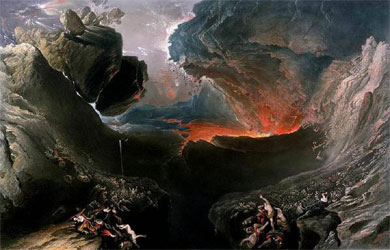 In contrast, animals kill for hunger. But when god kills — through pandemics, pestilence, earthquakes and floods — you wonder, can god be so evil? Is it a cruel sport? Or is there method to his mad fury?

No religious leader or mystic has been able to satisfactorily explain the problem of evil — the death of countless innocents at the hands of an omnipotent, all-merciful god. When Tagore was asked why there was evil, he said it was the same as asking why there was good. Now, we are visited by the coronavirus. To what purpose and design? Is nature acting in accordance with predetermined laws of the universe? Was Einstein wrong when he said “God does not play dice with the universe?”

The many misfortunes that befall mankind are explained away variously. Many believe the Old Testament that says the sins of the fathers are visited upon the children. A Hindu might explain that the tragedy is your karma for past misdeeds. A philosopher may blame it on the hubris of man. A scientist might say that ‘new man’, intoxicated with pride and greed, cocksure about his knowledge and power, is destroying the planet. And that the pandemic is a punishment by nature for upsetting natural harmony.

When the forests, soil, rivers, oceans, ice caps and the atmosphere as well as the flora and fauna on earth are depleted and, in many cases, wiped out, there is an impact on human beings, who play a minuscule part in the larger ecological web but have a symbiotic relationship with it. When this fine ecological balance is disturbed, humans cannot stay untouched. There is cause and effect. And a price is always paid.

Bertrand Russell in his celebrated essay ‘Men Versus Insects’, written 87 years ago, prophetically wrote that the threat to the human race may be as much from insects and micro-organisms as from wars. “…we no longer have occasion, like the cavemen, to fear lions and tigers, mammoths and wild boars. Except against each other, we feel ourselves safe… safe, except from the little creatures — the insects and the micro-organisms. Insects have an initial advantage in their numbers. A small wood may easily contain as many ants as there are human beings in the whole world. They have another advantage in the fact that they eat our food before it is ripe for us. If human beings, in their rage against each other, invoke the aid of insects and micro-organisms, as they certainly will do if there is another big war, it is by no means unlikely that the insects will remain the sole ultimate victors. Perhaps, from a cosmic point of view, this is not to be regretted; but as a human being I cannot help heaving a sigh over my own species.” But Russell could not imagine that man was racing towards self-annihilation by means other than war. He did not foresee that man, blinded by avarice and pride, would simply axe off the base of the ecological tree atop which he was perched.

In nature, no excess goes unpunished; there’s retribution for every trespass. And nature always has ways of compensation. I remember as a child going along with my father, a teacher in the local village school, to our rice fields in the mornings during planting season in the monsoons. He would point to the Dalits, the men and women covered with conical rain coats made of straw and reeds, planting the saplings and singing in the rain. My father would show me the two sacks they carried under each arm. Into one they stuffed the wild greens and spinach they plucked as they worked, and into the other they tossed the crabs that scurried in the shallow waters. My father used to say that god was compensating the poor with free food. That message stayed with me — that there was an underlying law of compensation bestowed one way or another in this very life. Nature compensates in strange ways when someone is robbed or defrauded. It unfailingly acts as a leveller.

Speaking of this self-correcting and compensating nature of the universe, Ralph Waldo Emerson said, “If the government is cruel, the governor’s life is not safe. If you tax too high, the revenue will yield nothing. If you make the criminal code sanguinary, juries will not convict. If the law is too mild, private vengeance comes in. Justice is not postponed. A perfect equity adjusts its balance in all parts of life. The dice of god are always loaded.”

The world is a bit like a mathematical equation — turn it how you will, it will balance itself. Cause and effect, means and ends, seed and fruit cannot be separated. For the effect already blooms in the cause, the end pre-exists in the means, the fruit in the seed.

There used to be a belief that there was a scientific, provable mathematical law of the universe, determined by these immutable laws. But the quantum mechanics of Heisenberg, Schrödinger and Dirac proved that the motion of atoms and electrons was indeterminate and random, that the ways of the universe were unpredictable. Stephen Hawking said, “Thus it seems that even god is bound by the Uncertainty Principle, and cannot know both the position and the speed of a particle. So god does play dice with the universe… He still has a few tricks up his sleeve.”

And so you ask in amazement, is this pandemic a prank by god? Or is it nature’s retribution for our pettiness, hatred, violence, bigotry, greed, arrogance and excess? Or is it just a random roll of the dice?

The founder of Air Deccan reads, ruminates and often writes.

Original Headline: Did god just roll the dice? Or did nature, like a mathematical equation, simply balance itself?