The Spectacular Mahakumbh Is a Grand Celebration of Eclectic Hinduism

The Mahakumbh, with its limitless cornucopia of Hindu memories and motives, is the closest that Hinduism comes to calling itself 'organised' in the Semitic sense of the term. It is easily one of Hinduism's great traditions, one which with its almost limitless diversity is the antithesis of a globalised, monochromatic world of materialism. The Mahakumbh is a spectacular display of faith, which also serves as a reminder of how order and organisation flow out of apparent chaos. 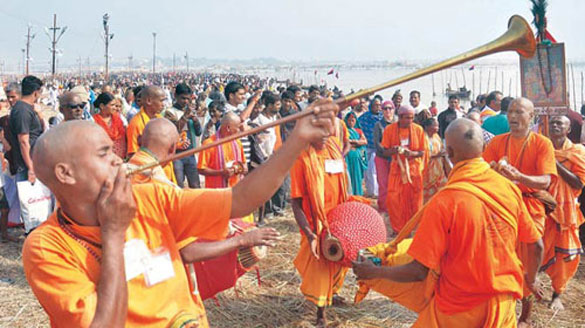 If there is anything that the Mahakumbh signifies, it is the varieties of societal and religious beliefs and ways to self-realisation. No two paths need be alike. This is both the strength and weakness — in shape of ambiguity and silences — of Hinduism, as many of its adherents believes, and not incorrectly, that one is most a Hindu when one is least a Hindu. Hinduism's propensity to absorb a multitude of thoughts including even atheism makes it, at times, inscrutable to its own followers.

However, in the tower of babel that is the human world — a world that in the Book of Genesis was "scattered with people by God who confused its people's languages, so that they would not be able to return to each other" — what`s lost sight of is the underlying unity of faiths. Whereas Abraham in the Jewish and Christian traditions is the father of Israelites, in Islam, Ibrahim is the first prophet and ancestor of Muhammad.

In the Hindu tradition, such status belongs to Brahma, the creator from whom all human beings are descended. It must not constitute a tremendous leap of faith to say that the difference between Brahma and Abraham is one only of semantics. There is common acceptance among all major faiths in their refinement that there is only one source of human gene-rations: some call it Brahma, others Abraham, or Ibrahim.

Of all the three major faiths, again, the antiquity of Hinduism goes deepest. Hinduism is perhaps the only religion that does not require a process to make one a Hindu. In fact there is no requirement at all, the reason why there is no ex-communication from Hinduism. In the Hindu schema, even Adharma, opposed as it is, must be acknowledged as having sprung from dharma.

There is yet another facet that differentiates Hinduism from other faiths: it is perhaps the only major religion predominantly contained within an ethnic and geographical boundary, unlike Judaism, Christianity and Islam. And apparently unorganised, it is at the Mahakumbh that the organisation behind Hinduism becomes evident, where the confluence proximates Chinese Buddhist traveller Yijing`s (seventh century) description of India as Mayadesha: the centre of a hundred myriad countries.

Another reminiscence motive of 'organisational' Hinduism is the colour saffron. When the Buddha established the first commune, he robed the monks in a shade of autumn-leaf yellow. A monk, the Buddha said, is like a leaf fallen from the tree, returning to its roots, its origin.

When Hinduism was challenged by Buddhism, Adi Shankaracharya re-established the Sanatan Dharma by creating four seats of Hinduism, began the monastic tradition, and gave the monks saffron — a colour derived from the flame. Shan-kara said anyone who wears a flame-coloured robe must imagine himself unflinchingly on the `chitaa` or the funeral pyre, burning his samskaras and making sure none is added.

The third organisation, again created by Shankara, was establishing "indestructible" sects of Hinduism, or `akshara`. The word `Akhara` is a corruption of the word `akshara`; which, of course, is also Sans-krit for `word` — and means the same: indestructible. These aksharas or Akharas were armed camps to secure Sanatan Dharma from both external aggression and internal disorder.

The seven camps were Avahan, Atal, Mahanirvani, Anand, Niranjani, Juna and Agni, who worshipped the trinity of Brahma, Vishnu and Mahesh. But mutation being the nature of things, the seven akharas split into three more after wars erupted between the followers of Vishnu and Shiva, wars perhaps as bloody as the ones these were meant to prevent against Hinduism. This led to Vaishnav acharyas, Ramanand, Ramanuj and Vallabh creating the Digambar, Nirvani and Nirmohi Akharas for followers of Vishnu.

Then there was a Sikh entry into the fold with Sri Chand, the son of Guru Nanak. A devoted disciple of the illustrious guru, Sri Chand always believed he would succeed Nanak as the leader of the new faith. But when time came to declare a successor, Nanak named Bhai Lehna and not Sri Chand — who was deeply disappointed. Bhai Lehna as Guru Angad took over the reins of the Sikh faith.

Learning not to have any expectation or desire, as these inevitably lead to disillusionment, Sri Chand found the Udaseen sect, which cultivates "indifference" to everything, since all temporal power and glory are fleeting. Udaseen was rejected by Sikhism and embraced by Hinduism. Later, Udaseen broke into Bada, Naya and Nirmal Udaseen, taking the number of Akharas to 13. This is where it stays. During the six-odd weeks at the Sangam, this deeper organisation of the teeming multitudes serves as a reminder of the permanence of ideas and the impermanence of place.