The Islamic New Year which began this week with the month of Muharram, has once again returned Muslims worldwide to remember and relive a deeply agonizing memory.

Almost fourteen centuries after the massacre of Imam Hussain (a.s.), the grandson of Prophet Mohammad (peace be upon him) and 72 of his followers on the 10th day of Muharram at Karbala, southern Iraq, the memory of the tragedy continues to inspire Muslims worldwide. 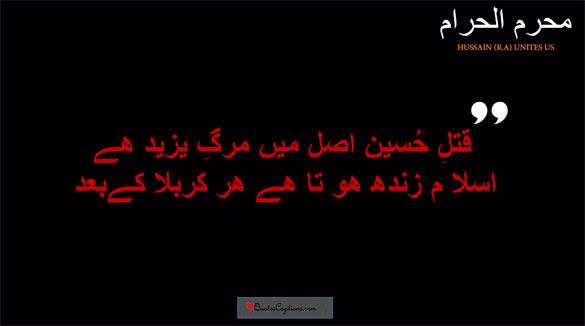 The defiance by Imam Hussain has gone to lay the foundation of innumerable campaigns for freedom in the centuries since the carnage at Karbala. Today, references to the example of Imam Hussain (a.s.) are found in numerous writings and poetry not just by Muslims but non-Muslims too.

In a powerful aspect of this yearly remembrance, many Muslims tend to broadly identify themselves either with the oppressors or the oppressed who fought back against tyranny, seeking inspiration from the example of Imam Hussain.

Understanding the true spirit of this tragedy requires appreciation of the circumstances surrounding Imam Hussain (a.s.) after he refused allegiance to the newly appointed caliph Yazid and chose to defy the ruling structure. As he left the holy city of Medina about five months before his brutal martyrdom at Karbala, the odds were packed against him.

The ‘Ummayad’ empire of which Yazid was the newest leader, had already either bought out anyone who stood in the way of its quest for unquestioned authority or simply had them killed.

It was therefore hardly surprising that Hazrat Muslim Bin Aqeel, the cousin of Imam Hussain and one of his closest confidantes, upon reaching the city of Kufa ahead of the massacre at Karbala found few who were willing to stand up against their regime.

This was in sharp contrast to the many letters received by Imam Hussain (a.s.) from notables of Kufa just days earlier, urging him to arrive in their midst and assume their leadership. Hazrat Muslim Bin Aqeel and two of his under-aged sons were quickly and brutally martyred under orders from the Governor of Kufa, mainly to inflict fear upon the local population and block any rebellion against Yazid.

But the mission of Imam Hussains was neither a worldly one to seek political leadership of the Islamic empire nor revolved around personal gain. Instead, his journey was primarily meant to challenge the ways in which the teachings of Islam had become distorted since the passing of Prophet Muhammad (pbuh).

Armed with this mission, Imam Hussain (a.s.) first traveled to Mecca for Hajj, but then chose to leave the holy city just two days before the pilgrimage upon receiving reports of Yazid’s dspatch of assassins to shed his blood inside the premises surrounding the holy Kaaba.

Today, it is hardly surprising that Muslims worldwide facing unspeakable brutalities, from Palestine to Kashmir and elsewhere, rely on the example of Imam Hussain to repeatedly renew their commitment in fighting back. Historical texts suggest that in the face of the numerically fewer souls on the side of Imam Hussain, the army of Yazid consisted of a strength of anywhere between 30 thousand and 70 thousand. It was indeed a massive overkill by Yazid.

Though the odds were clearly tied against Imam Hussain (a.s.), his message has consistently flourished. It is a message which itself testifies to the resounding victory of the cause of Imam Hussain, beyond the brutal massacre at Karbala followed by the imprisonment of women and children left behind.

Following the massacre at Karbala, Bibi Zainab (a.s.), the sister of Imam Hussain, carried his message boldly and bravely. Her famous sermon delivered eloquently before Yazid at his court in Damascus presents a living testament to the continuation of her brother’s cause.

The brutality unleashed at Karbala was followed with a brutal attack by Yazid’s army on the city of Medina, when the soldiers were given a free rein to loot and plunder over three days. And yet in spite of this and other instances of unparalleled persecution, the message of Imam Hussain has only spread widely over centuries. Today, the memory of Karbala continues to flourish widely in preserving the message of Imam Hussain (a.s.) and his followers, while the persona of Yazid and his followers receives widespread scorn and condemnation.

Farhan Bokhari s an Islamabad-based journalist who writes on political and economic affairs.