How Tolstoy, Heidegger and Wittgenstein Treat the Question Life Asks All of Us 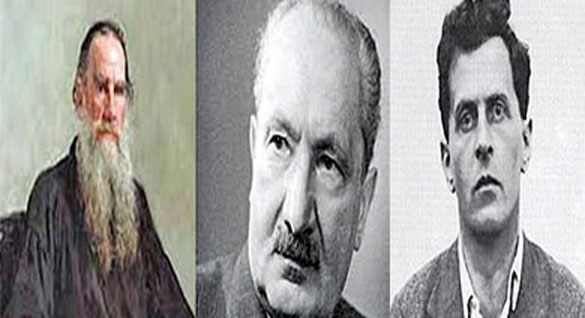 How Tolstoy, Heidegger and Wittgenstein treat the question life asks all of us.

Have we succeeded or failed in our lives? This question remains despite our successful careers or positions or percentage of marks obtained. Let us examine how we fare in the key test of life that poses one question to all and sundry – what is the meaning of our life?  In the words of an influential modern mystical philosopher, the most extraordinarily ordinary people are called mystics.

If life’s most important task is to find meaning of life or save one’s soul as Tolstoy would put it, the common folk succeed far better than so-called scholarly or educated elite.  Regarding the question of meaning of life that troubles every thinking person and the associated question why does man live or consent to live despite such strong rational arguments for absurdity, for suicide, Tolstoy’s meditations are of great value. Let us read his classic A Confession in a way that illuminates Heideggerian and Wittgensteinian insights on the issue.

Tolstoy articulates the common malady that has paralyzed the more educated modern man: “Rational knowledge led me to the conclusion that life is meaningless; my life came to a halt, and I wanted to do away with myself.” And, in contrast, he examined the lives of the great masses of people who have lived in the past and live today and found among them those “who have understood the meaning of life, who know how to live and die,” “ not two or three or ten but hundreds, thousands, millions. And all of them, infinitely varied in their customs, intellects, educations, and positions and in complete contrast to my ignorance, knew the meaning of life and death, laboured in peace, endured suffering and hardship, lived and died, and saw in this not vanity but good.”

Tolstoy comes up with a formulation that should be carried as a mantra or wazeefa for life to find how far one is able to see and live the meaning of life. “Faith is the knowledge of the meaning of human life, whereby the individual does not destroy himself but lives. Faith is the force of life. If a man lives, then he must have faith in something. If he did not believe that he had something he must live for, then he would not live. ... Wherever there is life, there is faith.” In more simple terms “To know God and to live come to one and the same thing. God is life." "Live, seeking God, for there can be no life without God."

With this realization, “more powerfully than ever a light shone within me and all around me, and this light has not abandoned me since.” One recalls here Ghazzali, from a different setting, when faced with not a dissimilar question, found rest in the light that God lit in his breast and dissolved all doubt.

One sees doubt and despair affecting so many today as a product of failure to drive the car of life effortlessly due to some imagined mental abstractions. When one lives life soulfully, one no longer asks the question of meaning of life. Even E. M. Cioran, arguably the most pessimistic philosopher who ever lived, voices this insight in his The Trouble with Being Born “When I happen to be busy, I never give a moment’s thought to the “meaning” of anything, particularly, of whatever it is I am doing. A proof that the secret of everything is in action and not in abstention, that fatal cause of consciousness.” One might recall here that religions such as Islam and Buddhism dissolve the speculative problems and unhappy consciousness arising from opposing the world to reality.

As such submission to truth or immersion in life achieved by “attention without distraction” or unconditionally doing one’s duty or loving one’s work or following Svadharma heals or creates a meaning that makes life worth living. One lives for certain ends that are not separable from life itself and one may well say that those alone truly live who find reasons to praise God or express gratitude to Him or suprapersonal fount of Life, Al-Hayy during and after every act.

A Muslim’s life is spent in praising God for everything including the seemingly most trivial. Alhamdulillah (Praise be to Allah) marks a life of submission to the Principle of Life. In fact by truly submitting one finds a joy and one can’t but express gratitude. In fact one sings God’s praise day in and day out, sleeping and waking, loving and working. One of the indications/tests for determining who is destined for heaven/hell is to see how far he finds life meaningful. In fact, as noted by a great modern philosopher, one may say God is what we call the Meaning of life. And finding God is finding the treasure for which Heaven is to be really treasured. Heaven is the name of the space or fragrance one finds in fulfilled lives such as those of saints and children. Lives full of meaning radiate a joy that uplifts. Company of children is treasured because children live life asking no questions and filing no complaints.

Anyone who asks the question of meaning of life as if it has some answer from outside or thinks it is a secret accessible to certain privileged people who have mastered some mystical technique is mistaken. Let us recall that one of the most important philosophical texts of the 20th century, Being and Time by Heidegger invoked Tolstoy’s treatment of death in The Death of Ivan Illych. In fact it appears that Heidegger’s (dis)solution of the problem of meaning translates Tolstoy’s insight into dense philosophical idiom.

Tolstoy deepens his meaning equals faith equation to solve the problem of death that philosophers from Socrates to Heidegger have rightly emphasized as the central problem.  In fact both philosophy and religion are essentially preparations for death. To quote Tolstoy “The essence of any faith lies in giving life a meaning that cannot be destroyed by death.” Ultimately it is not a particular abstract answer or formula to the question that satisfies all but the particular way of life one adopts that quells the despair occasioned from encounter with life where we appear to be in exile.

Wittgenstein stated “To believe in a God means to understand the question about the meaning of life... to see that life has a meaning." One may here refer to Wittgenstein’s formula for dissolving philosophical problems by paying attention to the logic of language games. Living life – “forms of life” – is its own fulfilment that leaves no residue. One plays one’s role in the game well and that is the “salvation.” Religion as lived by people in a way that meaning question doesn’t arise and if one doesn’t enter this form of life, one can’t comment on it. When people commit to religious life, they find their prayers are answered and providence cares for them or things don’t happen arbitrarily or good works pay or prayer/virtue is its own reward.

Some of the most intractable problems in philosophy of religion get illuminated by noting that people live their beliefs in a way that cognitive enquiries are not so relevant. Such enormously important questions as whether there is an afterlife or not in the popular sense of the term or whether personal God or providences oversees our lives or whether prayer works are, in a way, dissolved.

Buddha’s silence on metaphysical questions is yet another way of dissolving the problems that are a staple diet for certain people of exoteric or rationalist orientation. Whosoever chooses to live life as if God exists or God is the meaning of life and means it with all sincerity finds fulfilment. As Tolstoy told himself: “Like man and his power of reason," I said to myself, "the knowledge of faith arises from a mysterious origin. This origin is God, the source of the human mind and body.

Just as God has bestowed my body upon me a bit at a time, so has he imparted to me my reason and understanding of life; thus the stages in the development of this understanding cannot be false. Everything that people truly believe must be true; it may be expressed in differing ways, but it cannot be a lie.

Therefore, if I take it to be a lie, this merely indicates that I have failed to understand it." The question whether it is indeed the case objectively is misleading or misframed as it presupposes dualist epistemology, confounds problem with mystery (in the sense Marcel  uses terms) and fails to note that theology is autology and God is not an object or one could conceivably doubt what grounds all inquiry including the doubting subject.

Immortality doesn’t appear as a possibility or object of belief but something attested first hand in terms that one can’t see how to doubt or scrutinize. My Religion by Tolstoy thus phrases it. “I understood nothing of this life, it seemed to me frightful; and then suddenly I heard the words of Christ, and understood them; life and death ceased to seem evil, and instead of despair I tasted the joy and happiness that death could not take away.” Reading Heidegger one foregrounds death in a way that one embraces it – or conquers it? – in the midst of fulfilling or authentic life. Wittgenstein’s last words were “Tell them I had a wonderful life.”

PS: If we are still struggling to make sense of Tolstoy, Heidegger and Wittgenstein, don’t worry but just keep smiling and loving as that is the expression of success in finding the meaning of life.