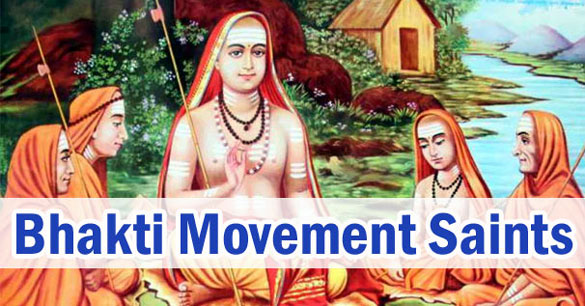 Bhakti Movement Saints – Among the Hindus, the Bhakti movement preached religion which was non-ritualistic and open to all without any distinction of caste or creed.

Bhakti movement swept across the medieval India with loving devotion to Rama and Krishna as the incarnations of Vishnu, the supreme lord, as its core message and philosophy and as a rebellion against the superficial Brahminical customs and rituals and caste distinction and discrimination prevalent in the society. The movement was headed by Ramananda who was the first to present Rama as the supreme lord. In the later years, Kabir, Ravi Das, Meera Bai, Chaitanya and many other lesser known mystics emerged and spread the movement far and wide in India. Ramananda is believed to have lived during the 15th century. The movement brought about a revolutionary change in the thought of the common people of India who were severely divided into castes, and untouchability was the prevalent practice against the lower castes. The leaders of the Bakti movement taught that it was not one’s caste but his deeds that were important and consequential in the end. One would be judged by his deeds and not by his race, colour or caste and a person’s deeds only would lead to his salvation. They were the lovers of the supreme being – Vishnu and sought to attain spiritual union with him through their devotion.

This movement had had a deep impact on the common men of the times and the philosophy of equality and loving devotion to the Supreme Being produced many exponents across India. The most influential of them was Kabir who was born in the central India but his message spread across the whole country. His dohas (couplet) were the main carriers of his message of pure love for humanity, devotion to God and a rebellion against the bias, hypocrisy and the complexities of the society. He lived a simple and pure life and attracted the common masses with their message of love and devotion.

(One does not become a pandit by reading voluminous books, but by reading the four letters of love)

Such was the appeal of their lyrical messages that they united all the downtrodden and the upper caste into one fold and helped bridge the gap between the high and the low, the rich and the poor and so on. He lived between 1440 and 1518 and subsequently his cult is known as Kabir Panth whose members are spread all over the country.

Another spiritual leader of the Bhakti movement was Sant Ravidas who also lived during the 15 century. He also envisioned an ideal world where there would be no discrimination between high and low and the rich and the poor and so it would be a world without suffering. He named his utopian world as ‘Begampura’ meaning the land without sorrow. He inspired another female mystic Meera Bai who considered Ravi Das her guru. She also lived from 1498 to 1557 and belonged to Rajasthan.

Though the Bhakti movement originated in the north, it soon captured the imagination of the common people from UP to Bengal. Chaitanya Dev became one of its spiritual leaders in the Eastern India (Bengal, Orissa, Bihar and Assam). Born in Nabadwip in Bengal, he travelled all over India and spread his message of Bhakti. He also lived during the same period. He was born in 1486 and died in 1534 four years before Nanak’s death. In Bengal he is revered and worshipped as an incarnation of Krishna.

In Punjab Guru Nanak emerged as the most powerful spiritual leader who founded the religion named Sikhism. He was also influenced by the message and philosophy of the Bhakti leaders like Kabir, Ravi Das, Jaidev of Bengal, Naamdev and Sufi Baba Farid and included the couplets and hymns of all these mystics in Guru Granth Sahib. Thus various leaders of the Bhakti movement from Punjab to Bengal and from Maharashtra to Deccan formed a spiritual chain joining and influencing the entire India.

Thus it can be seen that the Bhakti philosophy gave birth to many folk religions in India. But this Bhakti movement did not originate in space isolated in time. Nor did the philosophy dawned on the Bhakti leaders at once as a revelation but it has its roots in the Sufi movement which immediately preceded it. Bhakti movement was a spiritual movement among the Hindus as Sufism was a spiritual movement among the Muslims in the preceding century.

The Chishtiya Sufi order was established in India by Khwaja Moinuddin Chishti in the 12th century. He died in 1230. After that his disciples carried the order forward. Among his disciples, Bakhtiyar Kaki,Baba Farid Ganj Shakar, and Hazrat Nizamuddin Auliya spread the message of devotion to God and sulhe-kul (compassion and love for all). Hadhrat Nizamuddin Auliya had the famous disciple and sufi poet Khursrau who has had a deep impact on the society, literature and culture of India and has been called one of the champions of India’s composite culture. He wrote many poems, ghazals, dohas, riddles and is said to have invented qawwali, khayal and musical instruments like table and sitar. 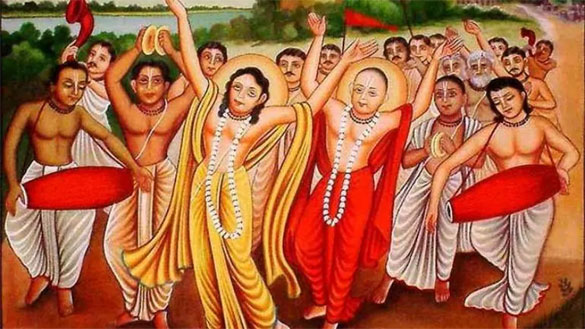 Dr Maula Baksh, a renowned critic and a professor of Urdu in Delhi University said that Kabir was greatly influenced by the poetry and thought of Amir Khursrau as he echoes many of his views in his dohas. In fact some of the dohas of Kabir are virtually translations of Khursrau’s couplets.. Hadhrat Baba Farid Ganj Shakar died in 1266 and his disciple Khwaja Nizamuddin Auliya died in Delhi in 1325. Amir Khursrau died in the same year.

Thus the 13th and 14th centuries saw the emergence and growth of sufi movement in India. The last sufi of the Chishtia order and the last sufi from Delhi Nasiruddin Chirag Dehli died in 1356. The message of the sufis of the subcontinent who believed in sulh-e-kul spread all over and captivated the Hindus and Muslims alike. With their compassion and sympathy for the downtrodden and the poor both from Muslims and Hindus, they had become a rallying point for the people from all castes and religions. Their message had a lasting impact in the collective psyche of the Indian masses which inspired a similar philosophy and practice among the Hindu spiritual leaders ultimately taking the shape of Bhakti movement in India. It can therefore be rightly said that while the 13th and 14th century were the age of sufi movement, the 15th and 16th century were the age of Bhakti movement in India and that the Bhakti movement was inspired by the sufis of the sub-continent.