Blessing The Right To Love: Pope Francis’s Attempts To Bring The Church In Tune With The 21st Century Are Revolutionary

I don’t discuss religion or wear it on my sleeve. It’s not part of my usual social interaction or professional and friendship choices. I’ve been married twice, both times to Hindus. Having said that, I’m a fairly devout Catholic.

I practise my religion in my own quiet way — going to Church every Sunday, praying for a minute in the morning and a minute at night, saying grace before and after meals, and fasting, as the devout do, on two days in the year: Ash Wednesday and Good Friday.

My religion has been unobtrusive and has never interfered in my daily life. Yet, I must confess three things about the Catholic Church have troubled me. First, it makes no allowance for the breakdown of a marriage, and for irreconcilable differences to come up in a couple. This is unrealistic. A divorced person cannot take communion in Church. Neither can the child of a divorced person or a live-in couple be baptised. The full blessing of the Church is denied to them.

Second, the Church’s view on abortion is too extreme. Finally, the Church’s position on gay and lesbian people has similarly been unfair, at least to my mind.

If these issues have troubled me, it is not because i see myself as any sort of a rebel. Rather they seem to contravene the freedom and liberty that Christ preached and that his work was all about. The Bible, at least the Bible as i was taught it by my grandmother years ago, tells us only the Lord can judge people. People cannot judge people.

For years I kept my opinions to myself, sharing them with only a few friends and family members but unwilling to rock the boat within the broader Catholic community. Now I find courage to do so from none else but the leader of the Catholic Church, the Pope himself. 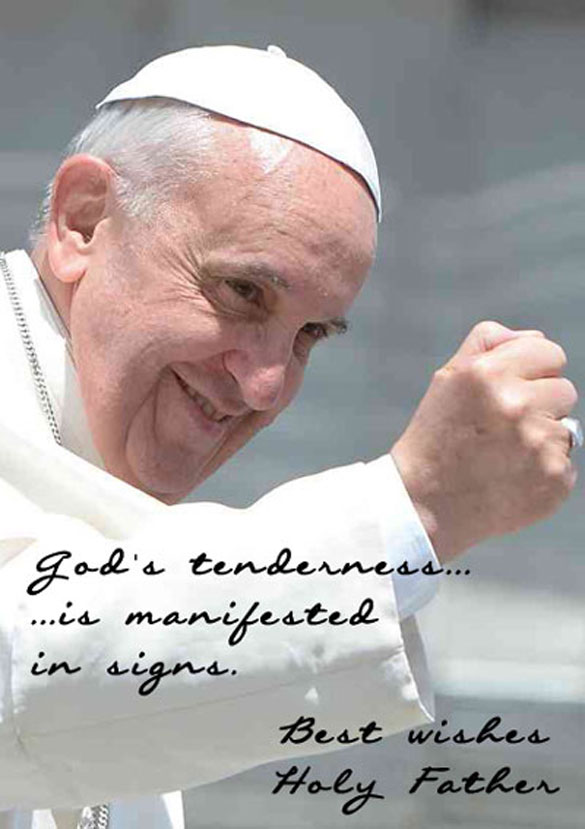 In September, Pope Francis presided over an extraordinary wedding event in the Vatican. The 20 couples who got married by him included divorcees, live-in couples and out-of-wedlock parents. For me it was a very emotional and moving message from the Pope.

The Pope has summoned an Extraordinary General Assembly of the Synod of Bishops, which is currently meeting in Rome. This is just the third such convening of the Synod in 50 years and it is discussing the Church’s attitude towards the modern family. The Vatican has released a preliminary document calling for the Church to welcome and accept those who have divorced and their children, as well as gay people and unmarried couples.

What Pope Francis is attempting is revolutionary. It is also essential, i feel, for the Church’s renewal and continued relevance to the millions who cherish it, and cherish an association with it, but cannot get themselves to agree with all its doctrinal principles. Indeed, other Christian orders have been quicker to coordinate their faith with modern lives and mores and the Catholic Church is making up for lost time.

There is a feeling that the Church is in a moment of dramatic transition, not unknown in its history but still worth taking note of. Pope Francis himself is from Argentina, the first Pope from the southern hemisphere and the first non-European Pope since the middle of the 8th century. In the years to come efforts of Pope Francis and the current Synod, as and when these reach fruition, could be considered even more far-reaching than deliberations of the Second Vatican Council, which began in 1962 and explored the relationship of the Church with the contemporary world.

It is useful to remember that the First Vatican Council had been summoned as far back as 1868 and for a century, the Church had neither approached nor addressed issues of renewal. Of the many changes Vatican II (as the Second Vatican Council came to be known) led to, the most important was the legitimisation of local and regional languages. It came to be belatedly recognised that all Catholics were no longer Latin speaking and not even European or aspiring to speak a classical European language.

Rather they were as diverse as human society — happy to follow their faith, worship as part of the Catholic Church, and still remain true to the mainstay culture and traditions of their society and country. In the larger scheme, Vatican II acknowledged that the days of European missionaries turning up in a distant land, disembarking from a boat, and preaching an alien, European way of life, had long ended.

If the Catholic faith had to survive, it had to make sense to adherents in their local contexts. In any case, Catholic communities such as those in Kerala are far older than European Catholicism.

I live in hope that the ongoing Extraordinary General Assembly of the Synod of Bishops will bring the Church into conformity with 21st century society and the human instinct for individual freedom and choice as much as — or even to a greater extent than — Vatican II did. Vatican II recognised geographical and linguistic diversity. Today, the time has come to recognise and validate social and familial diversity.

That is why, this Sunday morning, when I go to Church, I will say a special prayer for the Pope and the Synod. The Lord bless them.