These images showcase the joy, fellowship and inspiration that comes from faith.

For the past 12 months, amateur photographer Jim Grover has been shadowing a south London priest with a camera in hand, hoping to get a sense of what it's like to be a local vicar for the Church of England.

On one of his many days with Rev. Kit Gunasekera, who is in charge of St James’, Clapham Park, Grover visited Floris, an 84-year-old woman. Floris has become too weak to attend worship services, Grover said, so she spends many of her days in her downstairs sitting room, propped up in a hospital bed.

Grover watched as the priest offered Floris Holy Communion. He captured the tableau on his camera, grateful to have been given the chance to watch something so personal happen between his two subjects. "It's a very intimate thing," Grover told The Huffington Post. "If you’re receiving it, it must be a bit like receiving strength directly from God."

Grover's image has won the top spot at the "Faith Through A Lens" competition, which challenged amateur photographers in the United Kingdom to capture images that highlighted the positive role that religion can play in a person's life.

The competition was part of Interfaith Week, which runs from Sunday, November 15 to Saturday, November 21.  The campaign seeks to build relations between religious communities in England, Northern Ireland and Wales.

Below are the photos the top 10 photos from the competition. 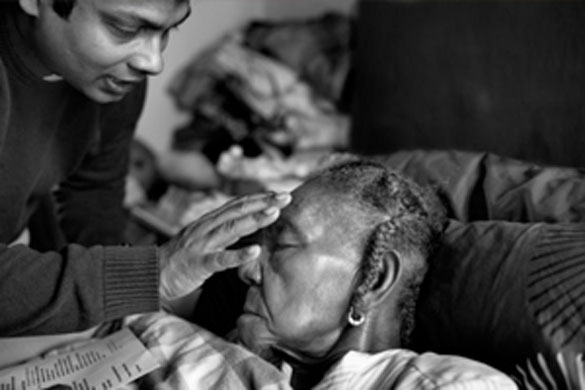 The elderly woman in this photograph, Floris, is too weak to attend worship services at church. She receives communion at home from her local vicar. The judges called this photo an "exceptional portrayal of faith in action." 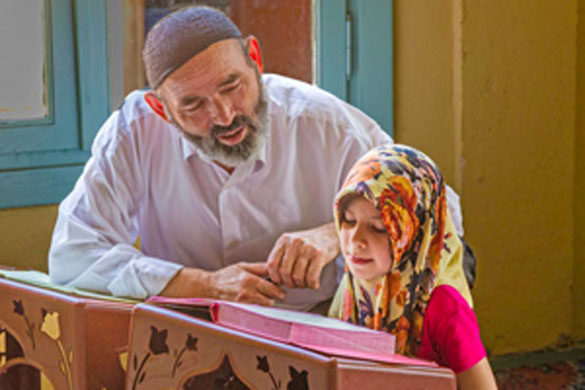 An imam teaches a young girl to read Islam's holy book. The judges praised the photo's "superb composition and vibrant colours,"  adding that it seemed to capture a serene relationship between teacher and pupil. 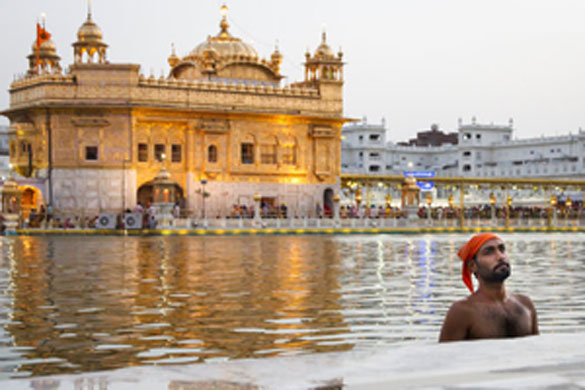 The photographer captured a moment of solitude as a devotee visits the Golden Temple in Amritsar, India, the chief pilgrimage site for the world's Sikhs. The judges commended the photo for its "fantastic use of light." 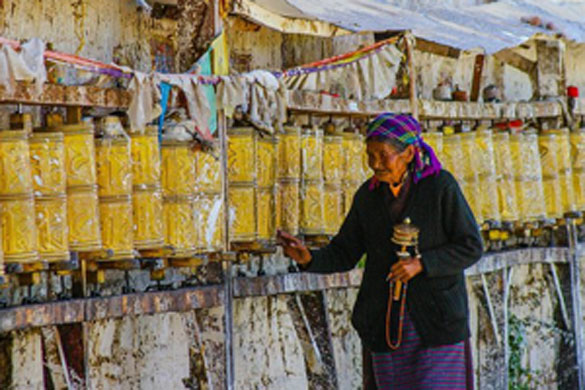 A Tibetan woman spins prayer wheels in Lhasa. The wheels are traditionally engraved with an ancient mantra, or prayer. The photograph was praised for capturing the "bold and beautiful" ritual aspect of a person's faith life. 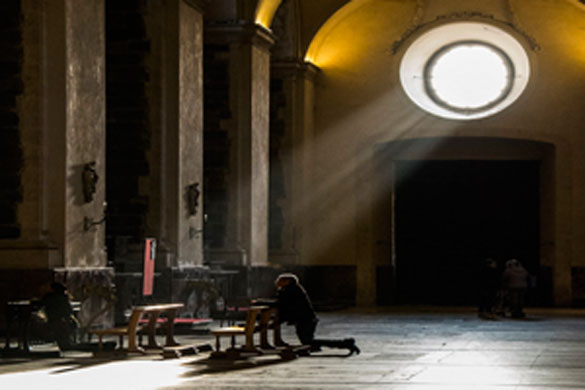 A worshipper prays at a side altar in the Duomo di Siracusa (Cathedral of Syracuse) in Ortygia, Sicily. The judges said this photograph captured the "spiritual silence" of the Duomo.

Cleansing A Hindu Soul In The Ganges At Varanasi 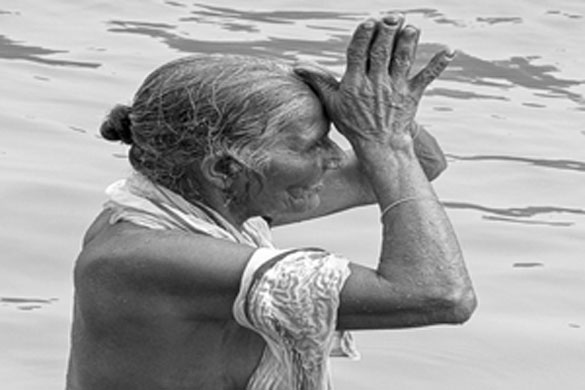 A woman bathes in the Ganges, a holy river in Allahabad, India. Hindus believe bathing at the river on auspicious days can help to cleanse one's sins. The site is usually crowded with pilgrims, which is why the judges praised the photographer for capturing the private prayer of a single worshipper.

The Language Of Faith 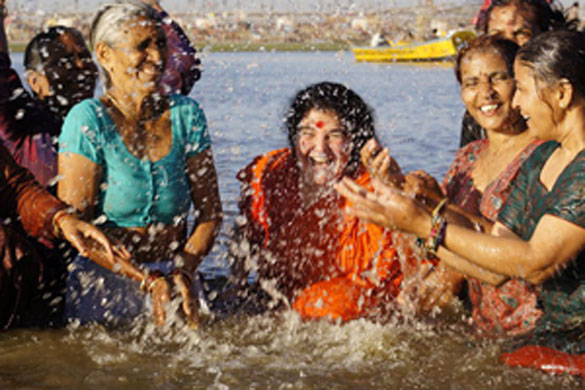 A group of women enjoy a moment of laughter in Devprayag, the town in India where the Ganges River begins. The woman don't speak the same language, but were united by their faith. The judges called this image a "joyous portrayal of faith." 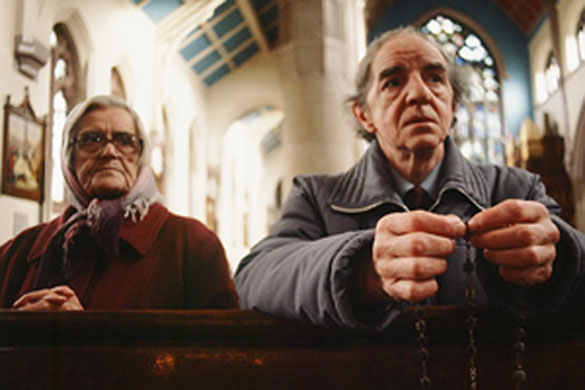 Worshippers pray inside St. Patricks' Church in Glasgow. The judges said the "simplicity and the focus on two people bring a real softness to the composition." 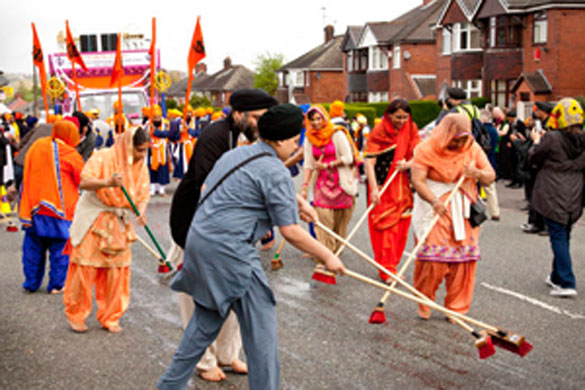 Sikhs in the UK participate in a Vaisakhi parade, in celebration of the founding of the Sikh community. These barefoot sweepers traditionally clean the street ahead of the arrival of the rest of the parade. "The image demonstrates real faith and community in the UK," the judges wrote.

A Lifetime Cross To Bear 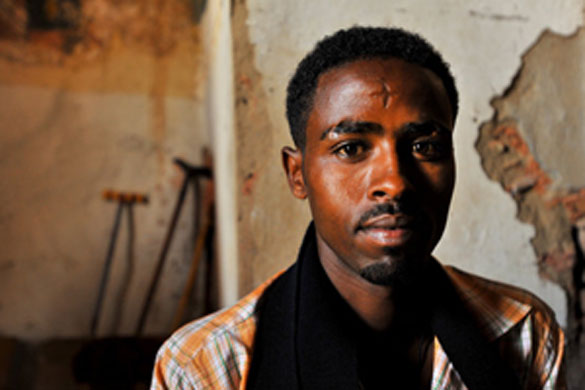 A young Ethiopian Christian has carved a cross into his forehead as a sign of his faith. The judges pointed out how the photograph captured the details of the young man's face.