Statues Are Assaulted Because They Represent Unsettled Accounts and Unredressed Injustices

Statues look a lot like the past, which is why, whenever they are called into question, we turn to historians. The truth is that statues are a thing of the past only as long as they stand quietly in squares, as indifferent to us as we are to them. At such times, which may actually last centuries, they are visited more intentionally by pigeons than by humans. But when statues come under assault, they leap from the past to become part of our present. Otherwise, how could there ever be any dialogue between us and them? Of course, there are statues that never come under assault, either because the past to which they belong is just too remote for them to make the leap to the present, or because they belong to art’s eternal present. Such statues are safe from everything and everyone except insane extremists, as was the case with the 5th century Bamiyan Buddhas in Afghanistan, blasted by the Taliban in 2001.

The statues that do make the leap and engage in dialogue are part of our present and are bound to come under assault because they represent unsettled accounts and unredressed depredations and injustices. Those who assault them are not asking for a settling of accounts nor do they demand any reparations from them. The accounts have to be settled and reparations have to be made by those who inherited and now hold the unjust power represented by the statues. Whenever the power that had them erected was toppled, whether justly or unjustly, the statues have been promptly removed, without much fuss and maybe even to the sound of applause. The reason today’s movement against the statues, which was initiated by the #blacklivesmatter movement, remains strong lies in the fact that to this day the power that once ordered the depredations and injustices to which the statues bear involuntary witness still holds sway. And if the power lives on, so do the depredations and injustices, which are truly the ones under assault.

What power is this? In the European, Euro-descendent context, this power goes by the name of capitalism, colonialism and patriarchy, three interconnected forms of power that have been dominant for almost six centuries. The former dates from the 15th century and the other two existed long before that, but were reconfigured by modern capitalism and then placed at its service. All three are so intertwined that it is impossible for any of them to exist without the other two. Therefore, what we see as the past is an optical illusion, a blindness to the present. Is colonialism a thing of the past? Certainly not. Historical colonialism — a specific form of colonialism in which a given territory is occupied by a foreign power – may, indeed, be said to be a thing of the past (although not entirely, as attested by the cases of Western Sahara, West Papua and Palestine). But colonialism has persisted to this day in other guises, from neo-colonialism to the plundering of the natural resources of former colonies to racism. If there was nothing in this that was part of our present, the statues would still be standing there, quietly left to the pigeons.

People gather to protest for the removal of a Confederate statue of John B. Gordon at the Capitol in Atlanta, Georgia, US June 9, 2020. Photo: Reuters/Dustin Chambers/File Photo

To be specific, if there were no ghettoised neighbourhoods like Bairro da Jamaica in the Greater Lisbon area; if, instead of being what it is, the skin of the populations most exposed to the virus were the same colour as the skin of those who are teleworking; if the police did not resort to racist brutality or allow neo-Nazi groups to infiltrate its professional organisations, the statues would still be undisturbed in their stony or metal repose. Isn’t patriarchy on the way out, what with all the gender equality laws and policies? Certainly not. Had the feminist movements been fully successful, femicide would not be on the rise, nor would the pandemic have caused a sharp increase in violence against women in every single county. Hasn’t capitalism come to an end? Certainly not. This is probably the most perverse illusion of all, one disseminated by the media and by economists and many social scientists. For many, capitalism used to be an ideology; now we have markets, associates, entrepreneurs, market economy, GDP, development. In fact, over the last forty years capitalism has increased its capacity to produce injustice, as plainly reflected in the erosion of workers’ rights and in wage stagnation (since 1969, in the US). This stew of unjust power favours the rise of racism, the negation of other stories, violence against women, and homophobia. This power is what the assault on the statues is directed against. The assaults tend to emphasise the anti-racist and anti-colonial struggles, but let us not forget that the anti-sexist and anti-capitalist struggles are just as important.

The statues will not find peace as long as these forms of power exist, especially if the current virulence persists. Besides, the statues only appear to be innocent, ill-chosen targets because of today’s pervasive politics of resentment: having ceased to grasp the causes of our discontent, we’ve turned on the consequences. That is why the impoverished white US worker believes that his worst enemy is the Hispanic immigrant worker, who is actually poorer than he is. That is also why the European middle class, fearful of losing all its recent gains, believes that its worst enemies are the immigrants and refugees. As long as this power lives on, if those who wield it have a shred of historical awareness and are at all willing to make concessions, they should prudently have the statues removed in orderly fashion and build a museum for them. Next, they should ask artists, writers and scientists from the country and from what we hastily call our brother countries to engage in intercultural dialogues with the statues and thereby start building a creative liberation pedagogy. The moment that happens, the past will leave the present through the front door.

The conditions are now in place to take that step, because, in addition to having endured so many humiliations, the wronged peoples are creative and even well capable of seeing that the power which has wronged them is also seeking liberation. Let me share two stories from my research experience as a sociologist. I was told the first story in 2002, when I was doing field work on the Island of Mozambique, in the northern part of the country. There is a statue of Portuguese poet Luís de Camões (15241580) on the island, placed there in colonial times. 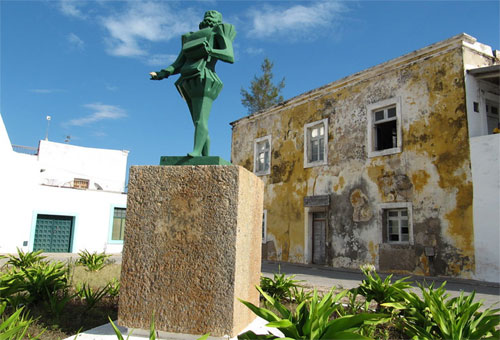 During the turbulence that spread across the country after its independence in 1975, the statue was removed and stored in the captaincy’s warehouses. There followed a several-year drought on the island. The local sages gathered together, performed their rituals and came to the conclusion that the lack of rain had probably been caused by the statue’s unseasonable removal. They asked that the statue be brought back, so there stands Camões again, gazing at the expanse of the Indian Ocean and bringing the rain to fill the cistern. In this way, Camões’s statue and history have been reclaimed by the Mozambican people. 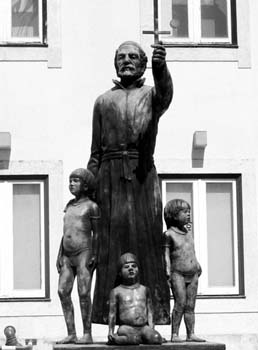 The second story took place on July 24, 2014, when the descendants of the indigenous children that are part of the polemic statue of Father António Vieira (1608–1697) in a Lisbon square visited the University of Coimbra’s Centre for Social Studies.

This delegation of Brazilian indigenous leaders, the largest ever to come to Europe, included representatives from the Guajajara, Macuxi, Munduruku, Terena, Taurepang, Tukano, Yanomami and Maya peoples.

They came to thank me for my pleading before Brazil’s Federal Supreme Court in the process that led to the demarcation of the Raposa Serra do Sol indigenous land.

Without wishing to belittle Canada’s McGill University — the first on the list — or any of the eighteen universities that followed in granting me honorary degrees, I consider the headgear and the baton of command that was given to me in that ceremony as one of the honours I cherish the most.

It was rather Father António Vieira’s statue who got it wrong, in leading us to believe that those children have remained children to this day. And there are quite many people around who still believe that.

Original Headline: Why We Tear Down Statues