Kabir: The Lord Is All Love and Mercy, In His Court True Repentance Never Goes Unrewarded

When the ruler Sultan Sikandar Lodhi (1489 to 1517) visited Banares (also known as Kashi) in 1496, an admirer of Kabir, persuaded the Sultan to meet the Saint poet Kabir. Already the Sultan had heard complaints about Kabir being heretic from Brahmins and Mullahs so he summoned him. The Sultan held an open court at Dashashwamedh Ghat and the Kotwal was ordered to present Kabir. 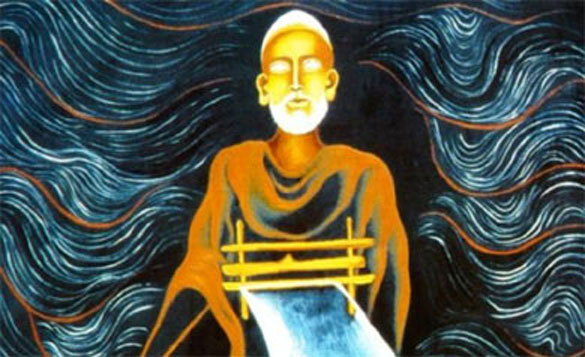 Brought before the Sultan, Kabir greeted the ruler like an average man. Kazi charged him for not properly bowing to the Sultan, but reciting “Raam”. Kabir replied that he knew only one king “Raam” and he bowed to that King of universe. “Within the Hindu and the Muslim,” he added, “dwells the same God.” Sultan was quite impressed by Kabir, simply dismissed the case. But that redoubled the zeal of his antagonists as they made a fresh complaint. He was summoned again.

On his return, Kabir only smiled. “All my life,” he began, “I have tried to impress upon the Hindus and Muslims that God is one, the Father of both. I pleaded with them to join hands in worshipping the Lord of All, but they always reject my plea. They could never stand together in the court of the King of kings, but today it amuses me to see them standing united in the court of a worldly king, a mortal like all others.”

This was real affront. The united front of the Muslim and Hindu “holy men” convinced the Sultan again of Kabir’s guilt as a heretic. Kabir was sentenced to death by drowning. The portrait of scene of his execution has been painted by Kabir in his own words as:

Translation: The mother Ganges is deep and profound (strong currents). Tied up in chains, they took Kabir there (to drown).

Now, this is a true autobiographical description, so it has not been distorted or embellished either way by Kabir’s opponents or his followers. It is truly ironic as Kabir is being consigned to Ganges river, which is revered as mother; a nurturer. They had brought him midstream where the depth is the highest and currents the strongest. In next line Kabir describes his state of mind as:

Translation: My mind was not shaken; why should my body be afraid (as mind is afraid about the body only)? My consciousness remained immersed in the Lotus Feet of the Lord (represents the Naam- the Creator’s Cosmic power of creation). 1. Pause.

The spectators on the either banks of the river were in state of shock and panic, and denounced the punishment as unjust. But Kabir Ji was undaunted; and resolutely engrossed in remembering the Lord. Soon, his chains broke, freeing his hands and feet and Kabir floated away to the bank unharmed. In his own words: 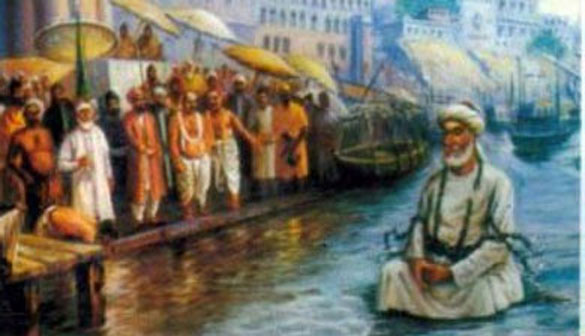 Translation: The waves of the Ganges (instead of drowning) broke the chains, and Kabir floated back to the bank as if seated on a deer skin.

Slowly, Kabir was transported to the shore as if sitting on a magical carpet-deer skin. Kabir expressed his gratitude in these words:

Translation: Says Kabir, I have no friend or companion. In the water, and on the land, the Lord is my Protector.

Now, Kabir started walking towards his home. Slowly, the spectators started following, soon it assumed a form of procession chanting and singing praises of God. The Sultan was informed that Kabir was not drowned but was leading the procession through the market streets of Kashi or Banaras.  Not to give up Sikandar Lodi, said he was not be released till he stopped chanting “Raam-Naam” . Kabir’s response was in these words:

Translation: Kabir, I am in love with the All-knowing Lord; the ignorant ones try to hold me back. How could I ever break with the One, who owns our soul and breath of life?

Frustrated at the defiance, the Sultan ordered that Kabir should be burnt alive. Kabir was bundled up in a basket and firewood put around him and it was lighted. This time, however, he emerged unscathed; it is said, his face was emitting a divine radiance.  The Kazis and Brahmins were further enraged when they heard shouts in praise of Kabir. Now they informed the Sultan; “This Julaha knows magic art that should not be allowed.” (Note: Some authors are of the opinion that this incident of consigning to fire happened after the incident of his stomping by elephant which is next. But everyone is consistent about these three events.)

Now, an additional charge of magician was added and Kabir was set out to be trampled by an elephant, but the animal would not cooperate.  Kabir again captured the incident in his own words as:

Translation: They tied my arms (behind my back), bundled me up, and threw me before an elephant. The elephant driver struck him on the head with the iron goad, in effort to infuriate elephant. But the elephant ran away in other direction, shrieking in pain. Seeing the spectacle Kabir felt as if elephant was saying "I am a sacrifice to this image of the Lord." 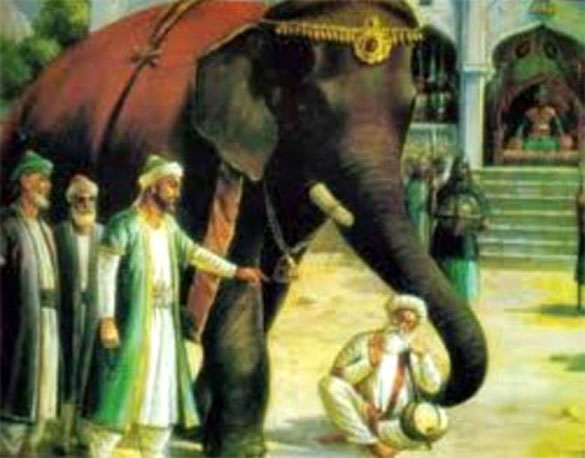 Kabir Ji continues his commentary saying that Qazi goaded the elephant rider go ahead and crush Kabir. Qazi threatened that otherwise I will have you cut to pieces. Kabir free of fear of death and was remembering Lord. But the elephant would not move, instead was immersed in meditation.  Kabir observed even God resides in its heart. Next, Kabir shares what was going through elephant’s mind. Elephant was questioning; “What sin has this Saint committed, that you have made him into a bundle and thrown him before the elephant?” The elephant lifting up the bundle, bowed down before it. But the blinded Qazi, could not understand (the injustice he was perpetuating). Kabir Ji concludes the commentary in these words:

Translation: Three times, (Qazi ordered the elephant rider) to stomp him (with the elephant). But still stone-hard heart (of Qazi) did not melt. Kabir says: “My protector is God, and the life breath of His devotees is in the fourth state of mind (above the three stages where the physical pains or pleasures can afflict a person).

Kabir was saying that in the heart of elephant dwells the Lord and he is compassionate, but the Qazi is stone-hearted with no feeling or emotions that can melt the heart. Everyone was speechless in awe, including the Sultan. To his credit, the Sultan ordered Kabir freed of his ties. He approached the poet with remorse and guilt. “I did not realize your greatness,” he said at last; “Please forgive me.” He stood before the saint, eyes downcast, awaiting his judgement.

“You are not at fault,” Kabir said with the graciousness only possible in a saint. “Such was the will of God. Look up, O Sultan. Don’t feel sad. Forget what has happened. The Lord is all love and mercy. In His court true repentance never goes unrewarded.”

Kabir was firmly convinced that God always saves his True Devotees, and there was no one who can scare the devotee at all in any circumstances.

Jawa, Daljit Singh. It is the Same Light. The Enlightening Wisdom of Guru Granth Sahib, Volume 6

Mukhopadhyay, Aju. Myth and Mystery in the Mystic Life of Bhakta Kabir (www.Boloji.com)