Teachings of All the Religions of the World Command Us - Hurt not others - Without Discrimination of Religion, Caste, Creed, Regionalism or Wealth

1.    The human beings are embedded with all the spiritual essence of brotherhood and divine inclusiveness.

2.    The concept of neighbours and neighbourhood has drastically changed from individual and family to nations and continents.

4.    Now the nations smell what is cooking in another nation as the individual neighbours do. 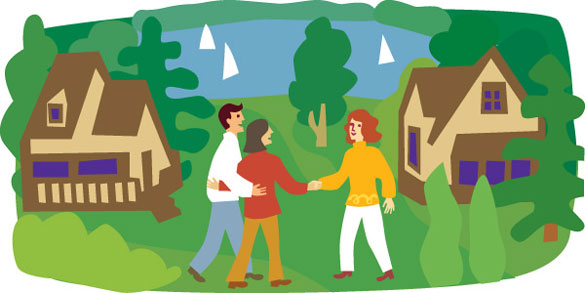 Being on bad terms with your neighbour can make your life frustrating, day after day.

Information technology has transformed the world into a virtual village. The concept of neighbours and neighbourhood has drastically changed from individual and family to nations and continents. Thus along with individuals now nations, far and wide, are next-door neighbours. The boundaries between the nations exist as the dividing walls between the houses. Now the nations smell what is cooking in another nation as the individual neighbours do. Anyhow, both ’cooking’ and ‘smelling’ here have different meanings and generate different consequences in respect to that of an individual neighbour.

As far as Islam is concerned a good Muslim is a good human being. A good human being is that is regarded as a good person by his neighbours. To be a good neighbour one needs to be blessed with compassion and inclusiveness among other positivities. The Holy Quran says: “O mankind, indeed We have created you from male and female and made you peoples and tribes that you may know one another. (Al- Hujurat: 13) There remains no doubt that Allah, All-Knowing, All-Aware has granted rights of a neighbour on us and has fixed it as a sign of being a righteous person in His eyes.

A human being is born with the qualities of humanity. Humanity is the basic tenet of a social person. One who lacks humanity lacks the ingredients of a social being. Man is a social animal because he cannot live without society’s social network.

A human being with a humane ethos does not trespass the rights of his neighbours, a good community does not find faults in another community, a good religion does not compel others to accept its religious faith and a nation does not encroach the territory and rights of another nation. All the world inspirational leaders, religious, spiritual and political, are needed to reach to the nations and communities and people to teach them their duties towards a neighbour. No inspirational political leader can deny the fact that every nation has one or the other grudge from one or the other country in a fight of establishing national superiority on the neighbouring countries. Small nations like poor individual neighbours are treated with disdain.

Every spiritual and religious leader knows that the world at present is devoid of the essence of a good neighbour that is the most important lesson of the religions and the spiritualism but no effective steps are being taken to arrest the ill will spread among them.  There are innumerable powerful and rich agencies that are supposedly working to arrest the ill will spread all over the world viz a viz people, communities and nations but no effective results are even in the wings. If seminars and conferences and workshops have gone ineffective other forms of spiritually enlightening ways should be undertaken to reach the masses with the message of love compassion and inclusiveness among all human beings.

Religious organisations and religious scholars of all religions need to work together to save humanity from sinking in the ocean of hatred and jealousy that ultimately will be a death knell for humane values. As the situation warrants, after a while, there will be no one to listen to the spiritual and religious teachings. The boundaries of religiosity and cultural ethics will get broken and there will be chaos everywhere.

Will the world take a lesson from the religion it follows to reclaim the space of a neighbour that has lost in the race of materialistic supremacism. Race of materialistic supremacism somewhere transformed the society of the living being in a society of ‘living deads’. The ‘living deads’ do not know what is happening in their neighbourhood. Living beings are those who are a part of the life of their neighbours, in pain or happiness. We need to rejuvenate our divine wisdom embedded in us as a creation of the Divinity that rules the world and all that is in it. The world just needs to ask itself the questions that it asks from its neighbours, the individual neighbours or the neighbouring nations. Consider the following edicts from almost all the religions and religious faiths that command their followers to respect the rights of a neighbour:

Judaism: “You shall not take vengeance or bear a grudge against your kinsfolk. Love your neighbour as yourself: I am the LORD.” — Leviticus 19:18

Christianity: "Do to others what you want them to do to you." Matthew 7:12

Baha’i faith: “And if thine eyes be turned towards justice, choose thou for thy neighbour that which thou choosest for thyself.” — Bahá'u'lláh

Hinduism: “If the entire Dharma can be said in a few words, then it is—that which is unfavourable to us, do not do that to others.” — Padmapuraana, Shrushti 19/357–358

Buddhism: “Hurt not others in ways that you yourself would find hurtful.” — Udanavarga 5:18

Jainism: “A man should wander about treating all creatures as he himself would be treated.” — Sutrakritanga, 1.11.33

Sikhism: “Precious like jewels are the minds of all. To hurt them is not at all good. If thou desirest thy Beloved, then hurt thou, not anyone's heart.” — Guru Arjan Dev Ji 259, Guru Granth Sahib

Quranic Commands Regarding the Rights of Neighbours

The world needs to learn from the Prophetic traditions given below and treat his neighbours as his brother. It will create brotherhood and bring inclusiveness in the society and the society will progress.

Prophetic Traditions on the Rights of a Neighbour

Do not think evil of each other, nor probe into each other’s affairs, nor excite one against the other. Keep yourself away from mutual hatred and jealousy. Do not unnecessarily oppose each other. Always remain the slaves and subjects of Almighty Allah and live like brothers among yourself (Hadith).

To support the community when it is in the wrong is like falling into a well while catching the tail of your camel, which was about to fall into it (Hadith).

Choose for others what you choose for yourself (Hadith).

"O Abu Dharr! Whenever you prepare a broth, put plenty of water in it, and give some of it to your neighbours" (Sahih Muslim).

“He is not a believer who eats his fill whilst his neighbour beside him goes hungry" (Bukhari).

Biblical Verses of the Importance of Being a Good Neighbour

‘You shall love your neighbour as yourself. There is no other commandment greater than these.” (Mark 12, 30-31)

If the world is a global village, it is the responsibility of the residents of this village to look after each other without any discrimination of religion, caste, creed, regionalism or wealth. We better stand for the rights of a neighbour before it is too late. We, the human beings are embedded with all the spiritual essence of brotherhood and divine inclusiveness, therefore, it is just a matter of time and the world will be blessed with compassion and love among the neighbours if we took the first step towards fulfilling our neighbourhood responsibilities.

The Muslims, the Christians, the Jews, the Buddhists, the Jains and all other religions and religious faith have the same commandments from their religious epics and that is ‘‘You shall love your neighbour as yourself. There is no other commandment greater than these.” (Mark 12, 30-31) and “This is the sum of duty; do nought onto others what you would not have them do unto you.” (Mahabharata 5, 1517)

Therefore, there is no excuse, it is just that taking the first step is always difficult but remember it is commendable. All human beings carry different traits, hence, they all are different from each other in culture, civilisation, habits and looks, therefore, they should only be taken as neighbours and treated well.