Religious Supremacist Attitude, Bigotry and Rigidity – Curse for the Humanity

Religions Are Inclined To Establish A Cohesive And Inclusive Society

1.    Religion means a morally sound system consisting of mutual respect and acceptability among the people of all faiths.

2.    Religious lessons are the carriers of nobility, gentleness and self-control.

3.    People who are responsible for the division in society can be anything but religious.

4.    Political ideologies, philosophies and cultural diversity do not divide societies, hence, religion is used for petty gains of the powers that be.

Religions are inclined to establish a cohesive and inclusive society. Religions do not teach immorality. Religion means a morally sound system consisting of mutual respect and acceptability among the people of all faiths. Religious lessons are the carriers of nobility, gentleness and self-control. Religions cannot have the traits of hatred, anger, enmity and jealousy. People who are responsible for the division in society can be anything but religious. Political ideologies, philosophies and cultural diversity do not divide societies, hence, religion is used for petty gains of the powers that be.

Humanity is passing through the most trying times since the inception of this world. Human beings have faced innumerable environmental and man-made eventualities that have created a havoc of the most devastating nature. These trying times came and were triumphed by the inclusive mentality of people together. Most recently, the world has been and is still in the grip of the pandemic, Covid-19, but human beings fought together and have almost won over it. These trying times were overcome because they were visible to the open eyes. People knew who the enemy is and what is its nature so these were tamed. 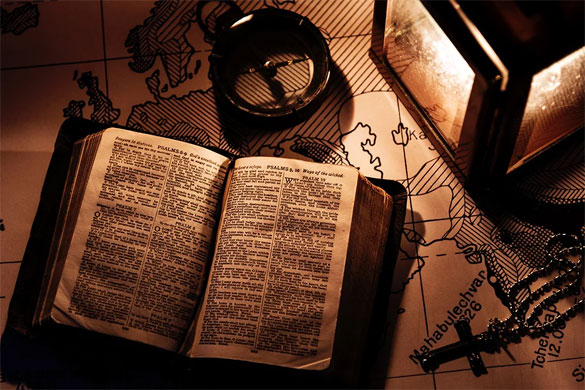 An open Bible sits on a map. Photo courtesy of Creative Commons

Dangerous than all the tsunamis and pandemics is the 'religious bigotry'. We all know the enemy that has taken the world on the brink of collapse but we are not acknowledging it. We cannot fight the invisible enemy. World nations are not acknowledging the enemy because they wish other nations to take the blame for religious bigotry spread all over the world. For developed nations, it is easy to find faults in the developing or undeveloped nations. So, this they are doing. They are unable to understand that religious bigotry will not eat one nation but will take the world to task.

Religions are blamed for religious bigotry because of the immoral acts of their followers. As the individual is judged according to his behaviour in society, religion is judged according to the behaviour of its followers. This is not humane to blame religion for the degrading humanity as it is a religion that has created human being and has created it with the positive essence of brotherhood and inclusivity embedded with a spiritual leaning towards fellow beings.

Religious Lessons on Bigotry and Rigidity In the Quranic Verses

... do not transgress. Indeed. Allah does not like transgressors. (Al-Baqarah: 190) - Sahih International

...and do not transgress. Verily, Allah does not like the transgressors. (Al-Maidah: 87) — Mufti Taqi Usmani

There shall be no coercion in matters of faith. - (Al-Baqarah:356)

“and do good as Allah has been good to you, and seek not mischief in the land. Verily, Allah likes not the Mufsidoon (those who commit great crimes and sins, oppressors, tyrants, mischief-makers, corrupt)” (Al-Qasas:77)

Lo! Allah enjoineth justice and kindness, and giving to kinsfolk, and forbiddeth lewdness and abomination and wickedness. He exhorteth you in order that ye may take heed. (An-Nahl: 90) - M. Pickthall

“Be just: that is nearer to piety, and fear Allah. Verily, Allah is Well-Acquainted with what you do” (Al-Maa’idah:8)

Truly, Allah is with those who fear Him (keep their duty unto Him), and those who are Muhsinoon (good-doers)” (An-Nahl:125-128)

“Indeed, Allah commands you to render trusts to whom they are due and when you judge between people to judge with justice. Excellent is that which Allah instructs you. Indeed, Allah is ever Hearing and Seeing.” — (An-Nisa, 4:58)

My brothers, show no partiality as you hold the faith in our Lord Jesus Christ, the Lord of glory. - James 2:1-26

And forgive us our debts, As we forgive our debtors. - Matthew 6:12

for all have sinned and fall short of the glory of God, - Romans 3:23

For the wages of sin is death, but the gift of God is eternal life in Christ Jesus our Lord. - Romans 6:23

Prophet Muhammad said, “Whoever has arrogance in his heart equal to an atom’s weight shall not enter Paradise.” (Sahih Muslim, Hadith 65)

The Prophet told us that Allah says, “O My slaves, I have forbidden Zulm (injustice, wrongdoing, unfairness) to Myself and I have made it haram (illegal) among you, so do not wrong one another.” (Hadith Qudsi — Narrated by Muslim, 2577)

Prophet Muhammad said, “Allah, Most High, has removed from you the pride of the pre-Islamic period and its boasting in ancestors. One is only a pious believer or a miserable sinner. You are sons of Adam, and Adam came from dust. Let the people cease to boast about their ancestors. They are merely fuel in hell-fire (Jahannam), or they will certainly be of less account with Allah than the beetle which rolls dung with its nose.” ( Sunan Abi Dawud — Narrated by Abu Hurairah]

Among the traits of Jahiliya (Days of Ignorance) that the Prophet strictly warned us about, one of them is about defaming others on the basis of their lineage. (Sahih Muslim)

Prophet Muhammad said, “Beware of injustice, for injustice will be darkness on the Day of Resurrection.” (Musnad Aḥmad 9361- Narrated by Abu Hurairah)

Prophet Muhammad said, “Beware of the supplication of the oppressed, for there is no barrier between it and Allah.” (Sahih Bukhari 4090)

One of the Prophet’s Hadith narrates: “There are seven categories of people whom God will shelter under the shade of His throne on the Day when there will be no shade except this.” [One of them mentioned is] the just leader. (Source: Sahih Muslim)

All the above-mentioned verses from the Abrahamic religions and the traditions of the Apostle of Allah, Prophet Muhammad (SAW) advocate peace, tranquillity and inclusiveness among the people of the world. These verses do not talk to their followers inclusively but address all the people. These verses denounce every kind of rigidity and force in society. The verses mentioned above are social philosophies. A treasure of wisdom, intellect and logic is there for the people who understand it.

In all the religions of the world, Islam is the only one that is highly misunderstood and transformed into a phobia. Muslims are shown in a demonic light. Quranic verses advocate peace and denounce transgression of every kind. There is no place for rigidity and force, therefore, only those who transgress or force their superiority should be nailed and not the religion, as a whole. Demonising Islam is pinning down a large number of world citizens. This demonisation of the religion and its followers is used to justify the terror that terrorists unleash.  To contain terrorism world will have to contain Islamophobic traits, crept into the mindset of many so that terrorists do not find an excuse for their inhuman and barbaric terror activities.

Down with all kinds of religious supremacism, bigotry and religious rigidity being advocated by the evil powers should be the mantra for the world to create an atmosphere of a just and inclusive society.

Following tradition should be enough to awaken especially the concerned Muslims and generally all concerned who for their petty gains scare their fellow human being and make their lives difficult to live.