Islamic and other Spiritual Teachings to Cope with Stresses of Life

Reciting Quranic verses, Chanting Vedic Shlokas or Hymns from other religious traditions And generally Keeping Oneself engaged with scriptures Is The Greatest Way Of Coming Out Of Mental Stress

1.    The feeling of being alone is one of the main reasons for mental stress.

3.    A cohesive and harmonious atmosphere is a cure for mental stress.

4.    Greeting with ‘Assalam u Alaikum’ getting replies, in ‘W Alaikum Assalam’ and listening to the Imam’s speeches are counselling models of fighting the stress. 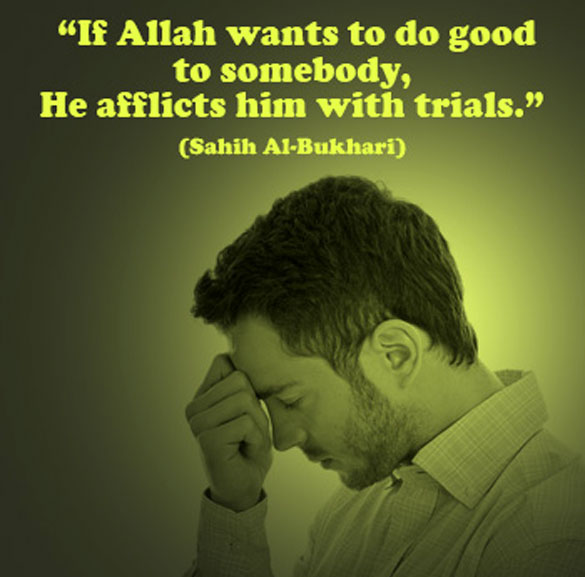 Life is an amalgam of various kinds of happenings and incidents coping with whom are sometimes beyond the wisdom of humankind. Many of those acutely distressing incidents leave medically almost incurable scars that need religious and spiritual cure.

Most of the times man is not responsible for his stress on the individual level as it is because of the natural disturbances that are not within his capacity to control. Some of the times our mental stress is the result of our wrong social decisions. A human being has a tendency of having unlimited expectations that creates a bubble of hollowness around him and when that bubble bursts he finds himself alone in his self created hollow world. This feeling of being alone is one of the main reasons for mental stress.

Being excessively emotional whether in love or hatred can be one of the main reasons for the mental stress a human being suffers. The disturbing emotional relationship creates a feeling of loneliness and the feeling of being unwanted. This traps people in the net of mental stress that is often difficult to come out of.

A mental disorder is not something that comes into being in a day or two. It rather takes time in taking shape. The signs of individual falling prey to mental stress starts showing in his actions and reactions and it continues for quite a long time and here comes the responsibility of a society where he lives. If the person concerned is living in a harmonious atmosphere, people around him take notice of the stress he is under and start his treatment.

Cohesive and Harmonious Atmosphere: A Cure for Mental Stress

The human being is emotional by birth. Emotion is one of the psychological traits ingrained in his self. Being emotional is not bad but as is said excess of anything is bad. Even  being extra emotional towards the happenings of society also sometimes makes living difficult. There is nothing new in it, the human being has always lived and coped with emotional bursts. As the Holy Quran describes in the following verse:

Anxiety is embedded in a human being’s birth as the above mentioned verse says but the Holy Quran also disapproves of being impatient. Allah is All-knower and Ash-Shaafee so He consoles His creation and says:

Islamic code of ethics and social values command the followers to be in the company of noble and positive people. Attending Namaz in the mosques and listening to the speeches delivered by the Imams from the pulpit is like being in a cohesive and positive gathering, that imparts a man a lesson of responsibilities towards the society and a sense of belonging. The responsibilities of the Imams includes talking to the attendees of the prayers in the form of Khutbah and making them aware of the prevailing social issues. If warranted it is the duty of the Imam to discuss the ways of coping with the situation in authentic Islamic ways in the light of the Holy Quran and Hadees.

Meeting people in mosques during the prayers, greeting them with ‘Assalam u Alaikum’, getting their replies, in ‘W Alaikum Assalam’ and listening to the Imam’s speeches and Khutbah are Islamic counselling models of fighting the stress and other psychological problems through the feeling of attachment, importance and belonging.

Unavailability of a harmonious social environment is one of the reasons for the mental stress one experiences so Allah, the Most Gracious commands people to be a part of the society and deliver good deeds and restrain from mischief. Consider the following Ayat:

And seek the (betterment of) the Ultimate Abode with what Allah has given to you, and do not neglect your share from this world, and do good as Allah did good to you, and do not seek to make mischief in the land. Surely, Allah does not like the mischief-makers.” (Surah Al-Qasas - 77) — Mufti Taqi Usmani

“Having a secure attachment has been linked to the overall wellbeing, coping, better mental health outcomes, enhanced self-esteem, and stronger relationship functioning.”

Medical Fraternity, the Frontline Workers and Their Mental Stress

Psychologists and psychiatrists believe that the world is going to see a big surge in psychiatric disorders among the medical fraternity, frontline workers, cured patients and their friends and families in particular and common man in general. The brunt of devastation and the havoc unearthed by the Covid-19 pandemic will have a long-lasting effect on the psyche of the world. No corner of the world has been spared the ill fallout on the social and economic consequences of the disease. People have lost their near and dear ones in large numbers and it has left scars on the psyche of humanity. In such a gruesome scenario it is the responsibility of every sensible being to provide moral support that is greater than gold. Communities need to visit people and talk to them in such a positive manner that may create a sense of belonging and fraternity. More than anything else to fight the chronic psychiatric disorder, a sense of belonging and a sense of being a part of society will be the best cure in the given circumstances.

All religions have spiritual contents that are very soothing to the human mind. Therefore lessons from spiritualism describing the importance of man in the world will have to be narrated to them. Spirituality is a soothing experience. It causes comfort to the human mind. And comfort is the keyword to bring back a human mind to the originalities of the world. Religious gatherings giving spiritual lessons have to be of great help in soothing the disturbed mind.

There have been occasions during the lifetime of the Prophet of Islam, Prophet Muhammad Pbuh when he has felt distressed but he always maintained his faith in the mercies of Allah, the Most Merciful and came out of his sorrows. The Holy Quran says describing His Apostle’s sorrow:

‘Then perhaps you would kill yourself through grief over them, [O Muhammad] if they do not believe in this message, [and] out of sorrow.’  (Quran 18:6)

Islamic awareness and its recognition of medical science have been responsible for various reputed names in the field of medicine. The first hospital of the world established in Iraq had the first psychiatric ward in Baghdad, Iraq established in 705 CE by the famous Islamic physician al-Razi as he believed:

‘Mental disorders needed medical cure that was to be treated through psychotherapy and drug treatments. (Murad I, Gordon H. Psychiatry and the Palestinian population. Psychiatric Bulletin. 2002;26:28–30)

The pandemic in its second wave has left deep scars on the face of humankind that needs to be cured with the engagement of all of us, in whatever way we can. Let us all come to the front and be counted as ‘front workers’ in fighting the psychiatric disorder of our fellow beings. It is necessary to bring them out of the delusions (وسوسه) that they must be experiencing. Strokes of delusions are experienced because of various unpleasant incidents where one feels helpless in doing something he wants Our ‘front workers’ must have gone through tough times of helplessly watching their patients die in front of their eyes.

Religious scholars believe that reciting Quranic Ayaat, Shlokas, Religious hymns and keeping oneself busy in religious works is the greatest way of coming out of the mental stress, as Ibn Taymiyyah says:

I have not seen anything that nourishes the mind and soul, preserves the body, and secures happiness more than continuous reading and contemplation of the book of Allah.”