When a Mosque Closes Its Doors

“Lock your doors and windows. Close your eyes. Recue the light. And wait patiently as now you do not have an option,” said the old man sitting outside the closed doors of a mosque.

“Put out the light. Let darkness prevail. This is the darkness that comes before death. So wait patiently for the end.”

I went to him, gave a Rs100 note and said: “Baba Jee, it is evening. The day is ending. Soon the night will begin. Be gentle to the people. Do not scare them. Give them hope.” 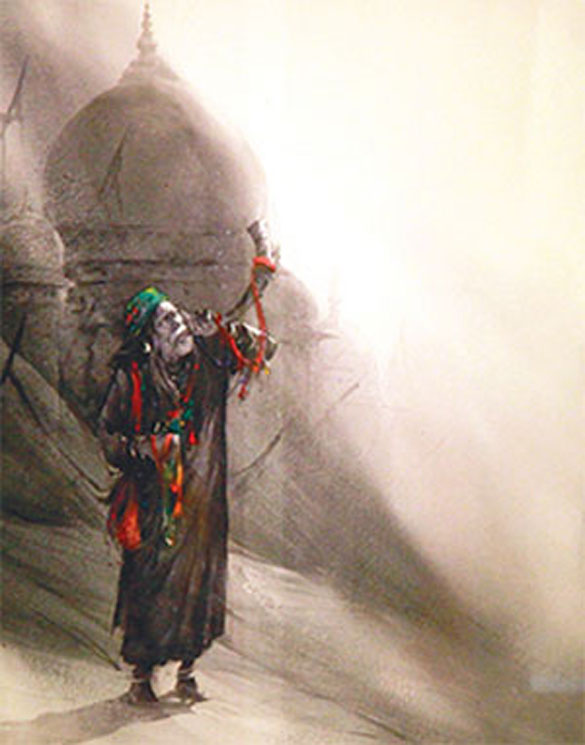 He pocketed the money and said: “I can lie once for a Rs100 but only once.” And then he shouted: “Listen to this man he has brought hopes for you. The door is open but only for minute. So escape if you can.”

As the evening prayers ended, people started coming out of the mosque. As the old man saw them, he went back to his previous chant: “This is the darkness that comes before death. So wait patiently for the end.”

Most people ignored him but some put their hands into their pockets and gave him some money, out of fear or goodness I do not know.

As I started to walk away, the old man asked me to wait. And after all others were gone, he pointed me to read a notice painted near the front door. “This mosque is only for our sect. Others are not allowed,” it said.

“Strange, never saw such a notice before,” I said to him.

“Are you from outside the city?” he asked me.

“Yes, I live in another country,” I said.

“And how long have you been away?” he asked.

“That’s why you find it strange. We do not. This is not the only mosque in the city that has this notice,” said the old man and walked away.

When I lived here, this city was known as the most liberal city in the country. It never had religious troubles. Often, people of various sects prayed with each other. And this encouraged those who were discriminated in other places to move here.

Since it was the largest commercial city in the country, people from all religious, ethnic and lingual groups came and lived here. Many also came from other neighbouring countries. Most still live here.

But as the city began to expand, it also started to shrink. As more people came, the space reduced. Land grabbers seized parks and play grounds. Lands kept aside for schools and hospitals were occupied too.

Multi-storied buildings cropped up everywhere. These were narrow and ugly and bereft of all comforts. Each building had hundreds of one or two-bedroom apartments with low ceilings. Luckily, the city’s winter was short and not very cold. But the summer was long and extremely hot. So, in the summers these apartments were like hell with no respite from the heat.

Traveling was another major problem. Most apartments were far away from the downtown area, where most of the shops and offices were. People had to travel scores of miles each day to go to work and the public transport system was among the worst in the world.

Yet, most people had no option but to live in these unfriendly places and use whatever means of travel they found to get to work and return.

All these made them impatient and intolerant. They were unhappy with themselves and their neighbours, uncomfortable with their environment and found their lives meaningless.

Eventually, the people of this city thought that there was one thing that could lead them to their salvation: Religion.

They loved everything religious, their mosques, madrasas and priests.

But it is not just the mosque that has changed. During this visit, I noticed other changes too. People try not to hang out at night, except in some areas that are considered safe. They do not greet each other, at least not as enthusiastically as they used to. And they do not visit each other as often as they did.

Another change that I noticed was the disappearance of an old tradition, that of storytelling. It is almost dead, at least in the large cities, although I heard that it is still alive in the villages.

When I was young, people loved stories. Sometimes they used them also to convey religious messages. I heard this one at a mosque:

The seeker knocks at the door of a Sufi master.

"Go away, there is no room for two here," says the master.

So the seeker wanders around for several years, and eventually returns, knocks again. The Sufi master asks who's there.

"You," replies the seeker.

"Enter," says the master. "Now, you are ready to receive knowledge."

Little tales like this have enlightened and entertained people in this and other cities in our region for centuries.

In the old days, such stories were also told during long winter nights at inns where travelers of the Silk Route often stayed. Sitting around a fire at the end of the day's journey, travelers loved these tales and generously rewarded the storytellers.

A bazaar in Peshawar is still called the Bazaar of the Storytellers, although the storytellers have long disappeared. The stories survived the bazaar but I am told that their contents have changed. I am not surprised.

In the 1980s, when the Afghans were fighting the Soviets, I heard Afghan story tellers mixing war stories with Sufi tales. Those who fought against the Russians were included among the traditional heroes that the storytellers loved to talk about.

When Russians left, the Mujahideen occupied Kabul – creating more chaos and bloodshed than the Russians had done: so the heroes became villains.

In a 1980s version of the old Sufi tale, the master hears a knock on his door.

There is no reply: only more knocking.

"Who?" he asks again, and when no one responds, he opens the door. As he steps out, a bullet pierces his heart and the Mujahideen commander enters his home with his marauding followers, eats all his food, plunders his possessions, and moves on – to seek another Sufi master.

Under the Taliban, the story acquired yet another twist.

The Taliban commander goes to the Sufi master. But he is not seeking knowledge. He is convinced that he's holier than the Sufi. He bangs on the door with a stick.

When the master comes out, the commander asks the master why he does not come to the mosque to pray five times a day.

"We Sufis pray inside our homes," says the master.

"Heretic," declares the commander. He seizes the Sufi's property, puts him on a donkey and banishes him from the town.

With nowhere to live, the Sufi becomes a homeless wanderer.

As he travels around, he meets a Taliban leader in a mountain cave.

“You call yourself the leaders of the Muslims and yet no Muslim leader supports you, why?" he asks the Taliban leader.

“And how did you conclude that?” asks the Taliban leader.

“Even your neighbour Pervez Musharraf supported the Americans, why?" asks the Sufi.

"Musharraf? He is like the man in the tale he once told his friends when he found himself facing a ferocious tiger in the jungle. 'What did you do? How did you survive?' asked his friends. 'What could I do? It was the tiger's decision to eat me or not. So here I am telling you this story,' said the man. Similarly, poor Musharraf made no decision. It's the American tiger that decided not to eat him," said the Taliban leader.

"You ask all your followers to accept martyrdom but you yourself hide in caves. Why this contradiction?" asks the Sufi.

"Who says I am alive? A leader dies every time one of his followers is killed. I have already died hundreds of times. I am not afraid of dying," said the Taliban leader.

As they talk, they hear the whistle of a falling bomb outside, then a heavy object pins down the two men. The Sufi tries to wriggle out from underneath the object.

"Don't move," warns the Taliban leader. "It could be a bomb. It will explode if you move."

The Sufi, who is already on his feet, says: "It is my donkey, my dear.”

Anwar Iqbal is a correspondent for Dawn, based in Washington, DC