Mythology Will Not Remember Me Kindly, Everyone Needed a Fall Guy And That Was Me, Kaikeyi

So you stand before me, Rama, seeking my blessings as though nothing ever happened. What a cold-hearted scam artist you are! You know this will only add to your deification.

Everyone expects me to beg forgiveness of you. The world and your mother, too. They accuse me of having killed your father and having sent you and your wife to the wilderness, infested with demons and untold horrors. But tell me Rama, did I really do wrong by you? 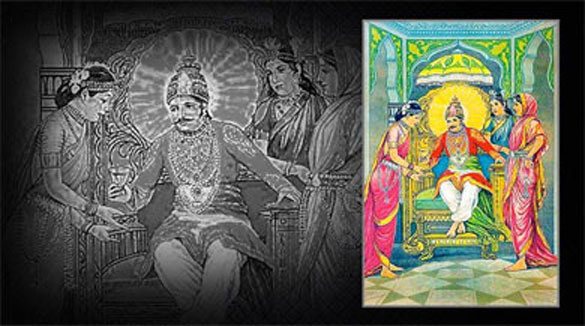 Mythology will not remember me kindly. Everyone needed a fall guy and that was me. Kaikeyi. The woman her son refuses to call mother anymore for he held my maternal love accountable for what he thinks I did to you. I had told him once he was my blind spot and he dredged that up to say my name will never be given to any woman for I am the evil creature who used womanly wiles to banish you. But you know, Rama, as I do, that if I hadn’t, you would have remained a mere prince among men, with your trophy wife at your side. You would have loved each other, produced a passel of children, fought a few wars, killed a few demons, and, in time, died and drifted to mythological oblivion.

Everything is predestined. You know it as I do. I knew what was expected of me even as a girl. There is a story afloat that a sage granted me a boon of a left hand as strong as a diamond. It is, perhaps, inconceivable to men everywhere that I was a natural charioteer and that perseverance had given me endurance and strength.

Your father fell in love with my feistiness. Ancients say behind every successful man is a woman. In your father’s case, I led from the front. I was his charioteer and went with him to every battle. And once when the wheel of our chariot broke away, I told the horses what to do, leapt from the chariot and put the wheel back in place. Your father was wounded in that battle but I healed him back to health. And so, the two wishes that people will bring up when they talk about me were granted to me. I knew it came from gratitude rather than love and so I gave it no further thought.

Tell me, if I so wished my son to inherit the throne, wouldn’t I have banished your mother and you to the forests long before? Or had Manthara strangle you as a baby? Or, a horse kick you to death when you first started riding? Rama, there are 10,000 ways to get rid of someone if one wishes to.

I waited to see if you would on your own start on your mission. Instead, I saw you grow content with your circumstances, and the steady draining away of purpose. So when Bharata went to visit my father and I saw the preparations for your coronation, I knew it was time to act. I knew I couldn’t convince your father to ask you to go. Nor would you leave of your own volition.

The much maligned Chamber of Sorrows was part of the spin I created. It seemed like the kind of thing the world would believe. Give them what they want to hear and they will accept it as the holy truth. There is no such chamber. As for Manthara, I knew she would become synonymous with malice. At least, she wouldn’t be forgotten, I told myself. Does anyone remember your mother’s wet nurse? Or yours, for that matter?

I thought of the heroines of ballads and took a cue from stereotypes that existed of distraught women. I did weep a bit. Just enough to smudge my eye make-up and leave black streaks on my cheeks. I opened my braid and let my hair tangle into clumps. Not very difficult when you have curly hair as I do. Your father didn’t know what to make of this dishevelled me. In his world, women didn’t weep and hammer their fists on the bedroom floor. They just did what was expected of them without a murmur. Even as he was trying to figure out how to calm me, I brought up the two boons and he looked at me as if I had betrayed him. And I thought then, just like a man. Remind him of what he owes you and he will act as if you asked for his liver on a plate.

The rest you know, Rama. From a mere prince you became Shri Rama, and you went on to fulfil your task — decimate Ravana. In all honesty, Ravana has my sympathy. The gods were jealous of who Ravana was. It was a conspiracy and, like all conspiracies, effected in the name of the greater good.

Everyone — the gods, your father, even poor Sita, and that bit actor, Sravan Kumar, and I — played a part. The difference between you and me is that even though I didn’t like doing what was expected of me, I went ahead and made it happen. You didn’t. You waited to be banished; you made a production of the whole exercise and you ensured you remain blameless. Soon, you will go on to become god among men, notwithstanding how you will treat Sita.

Before you leave to carry stories of my remorse and your largesse, do me this one thing: For heaven’s sake, get that idiot Bharata to start wearing footwear again.

Anita Nair is the author of several novels. Her latest novel is Eating Wasps.

Original Headline: Mythology will not remember Kaikeyi kindly. But what if she was just playing her part?