Amjad Farid Sabri's assassination: Why Talibs Are Gagging the Voice of Syncretism in Pakistan

Fundamentalists hate Sufism because it is an antidote to their radicalism. Singer Amjad Sabri's killing last week was an attempt to reinforce the reign of fear

Good news rarely comes out of Pakistan these days, but reports of the assassination of qawwal maestro Amjad Sabri by the Taliban in Karachi this week was an especially ominous development. Sufism, and spectacular Sufi music, are two of the most prominent sources of hope, pleasure and tolerance in that increasingly bloody and divided country. 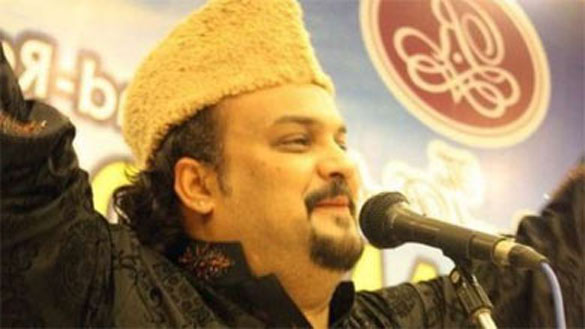 By assassinating one of the most celebrated Sufi singers in the country, the Taliban were attempting to impose their obscurantist reign of fear and their right to shut down voices they disagree with, as well as striking at Sindh, the Sufi 'capital' of Pakistan and a place which had until recently resisted them.

The rise of Islamic radicalism is often presented in starkly political terms, but what happened in Karachi this week is a reminder that at the heart of the current conflict lie two very different understandings of Islam. Hardline Wahhabi/Salafi fundamentalism has advanced so quickly in Pakistan partly because the Saudis have financed the building of so many madrasas which have filled the vacuum left by the collapse of state education. These have taught an entire generation of Pakistanis to abhor the gentle, syncretic Sufi Islam, and the music that carries its message, and to embrace instead an imported form of Saudi Salafism.

The news of Amjad's shooting by two men on a motorbike reminded me of an incident a decade ago in the Frontier.

Rahman Baba, 'the Nightingale of Peshawar', was an 18th century poet and mystic, a sort of North-West Frontier version of Nizamuddin Auliya. He withdrew from the world and promised his followers that if they also loosened their ties with the world, they could purge their souls of worries and move towards direct experience of God. Rituals and fasting were for the pious, said the saint. What was important was to understand that divinity can best be reached through the gateway of the human heart — that we all have paradise within us, if we know where to look.

For centuries Rahman Baba's shrine at the foot of the Khyber Pass has been a place where musicians and poets have gathered, and Rahman Baba's Sufi verses in the Pukhtun language made him the national poet of the Pathans. As a young correspondent covering the Soviet-mujahedin conflict in the 1980s I used to visit the shrine on Thursday nights to watch Afghan refugee musicians sing their songs to their saint by the light of the moon. Some of the most magical evenings I have ever had in South Asia were spent in the shrine, listening to sublime Sufi music.

Then about ten years ago, a Saudi-funded Wahhabi madrasa was built at the end of the track leading to the shrine. Soon its students took it upon themselves to halt what they saw as the un-Islamic practices of the shrine. On my last visit, I talked about the situation with the shrine keeper Tila Mohammed. He described how young Islamists now came and complained that his shrine is a centre of idolatry and superstition: "My family has been singing here for generations," said Tila. "But now these Arab madrasa students come here and create trouble."

"What sort of trouble?" I asked.

"They tell us that what we do is wrong. They ask people who are singing to stop. Sometimes arguments break out, even fist fights. This used to be a place where people came to get peace of mind. Now when they come here they just encounter more problems, so gradually have stopped coming."

"How long has this being going on?" I asked.

"Before the Afghan war there was nothing like this," replied Tila Mohammad. "But then the Saudis came, with their propaganda to stop visiting the saints, and to stop us preaching ishq (love). Now this trouble happens more and more frequently."

Making sure no one was listening, he whispered: "Last week they broke in two the saz of a musician from Kohat. We pray that right will overpower wrong, that good will overcome evil. But our way is pacifist," he said. "As Baba put it: I am a lover, and I deal in love/ Sow flowers, so your surroundings become a garden/ Don't sow thorns; for they will prick your feet/We are all one body/ Whoever tortures another, wounds himself."

Behind the violence lies a long theological conflict that has divided the Islamic world for centuries. Rahman Baba, like Rumi or Nizamuddin, believed passionately in the importance of the use of music, poetry and dancing as a path for reaching God, as a way of opening the gates of Paradise. But this use of poetry and music in ritual is one of the many aspects of Sufi practice that has attracted the wrath of modern Islamists. For although there is nothing in the Koran that specifically bans music, Islamic tradition has always associated music with dancing girls and immorality, and there is a long tradition of clerical opposition.

At Attock, not far from the shrine of Rahman Baba, stands the Haqqania, one of the most radical madrasas in South Asia. Much of the Taliban leadership, including its leader Mullah Omar, were trained here, so I paid a visit and asked the madrasa's director, Maulana Sami ul-Haq, about what I had heard at Rahman Baba's tomb. For him. the matter was quite simple. "Music is against Islam," he said. "Musical instruments lead men astray and are sinful. They are forbidden, and these musicians are wrongdoers."

Nor were Sami's strictures limited to the shrine's music: "We don't like tomb worship," he continued. "We do not pray to dead men, even the saints. We believe there is no power but God. I invite people who come here to return to the true path of the Koran. Do not pray to a corpse: Rahman Baba is dead. Go to the mosque, not to a grave."

This sort of madrasa-driven change in attitudes has been reproduced across Pakistan in the last 30 years. There are now 31 times as many madrasas in the country as there were in 1947: from 245 at Independence the number shot up to 6,870 in 2001, and greatly increased year by year since then. Across Pakistan, the religious tenor has been correspondingly radicalised: the tolerant Sufi-minded Barelvi form of Islam is now out of fashion in a country increasingly over-run by the rise of the more hard-line and politicised Wahhabi-Salafism. Many Sufi mosques and shrines have come under attack in recent years, including the 2010 bombing of the Data Darbar shrine in Lahore that killed more than 40 people.

Sufism is not only the most effective antidote to Taliban-style radicalism, it is an entirely indigenous resistance movement to fundamentalisms of all sorts, with the deepest roots in South Asian soil. That is exactly why the Talibs hate the Sufis and attempt to suppress them. If only the Pakistani governments could finance schools which taught Pakistanis to respect their own indigenous and syncretic religious traditions, rather than buying fleets of American F-16 fighters, and handing over education to the Saudis, Pakistani might now yet be a potential partner of a future Indian superpower — a place where Sufis can still sing safely and in peace. Instead, Pakistan is every day increasingly coming more to resemble a tragic would-be clone of pre-9/11 Taliban Afghanistan.