'Boko Haram Is Standing Strong from Nigeria to Niger and Cameroon -- We Are in an Islamic State,' Declared Abubakar Shekau

We are in an Islamic State, declared Abubakar Shekau in a 52-minute video, shot somewhere in northeastern Nigeria, in August 2014. The leader of Boko Haram, the Sunni jihadist group that had captured swathes of territories in the Borno and Yobe States, also said, ‘We have nothing to do with Nigeria.” He later declared allegiance to Abu Bakr al-Baghdadi, the self-declared ‘Caliph’ of the Islamic State terror organisation, who was killed by American forces in 2019. 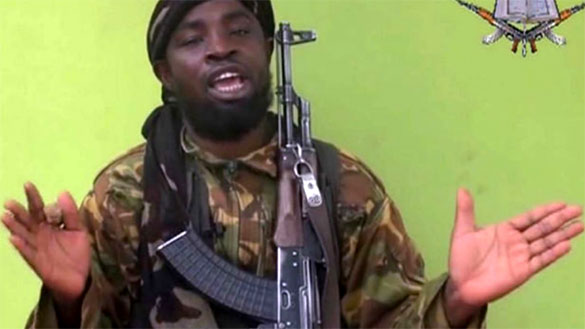 Shekau’s claim came a few months after over 200 girls were abducted from a school in the town of Chibok in Borno by Boko Haram. The Chibok abductions— most of the girls are still missing—triggered a global campaign against the jihadists. Muhammadan Buhari, a former military dictator, contested the 2015 presidential election, promising to defeat Boko Haram and restore security in the northeast. Mr. Buhari won and in his first term, he set up a regional coalition to fight the terrorists. The campaign was effective. Within a year, the Nigerian troops liberated most of the towns and villages Boko Haram had controlled and pushed the jihadists back to the Sambisa forest and the Mandara Mountains.

But the offensive did not defeat Boko Haram, who regrouped in the forest and started a relentless terror campaign in recent years. When Boko Haram claimed the abductions of hundreds of school boys in Katsina State in the northwest on December 11, many were surprised as the region was well outside the group’s area of operations. The government claimed that local “bandits” were behind the abductions. But Boko Haram had released a video showing the boys in distress, before most of them were released on Friday after talks between the authorities and the kidnappers. The jihadists said they carried out the operation as the school was providing “unIslamic teachings”. One of the boys released told the media that they were captured by “the men of Shekau”.

The attack on schools and children is nothing new for the group. Boko Haram’s founder Mohammed Yusuf, a popular cleric based in Maiduguri in Borno, was a vocal opponent of Nigeria’s school system, which he called the “western education” system. In 2002, he set up a religious complex, including an Islamic school and a mosque, in Maiduguri, which attracted hundreds of young students from across the country. But Boko Haram, whose official Arabic name was ‘Jama'atu Ahlis Sunna Lidda'awati walJihad (People for the Propagation of the Prophet's Preachings and Jihad), was more than a group of preachers. The locals called them Boko Haram (which in the Hausa language means ‘Western education is forbidden’) because of their hardline opposition to the school system.

Yusuf wanted to “purify” the practice of Islam and create an Islamic State. The religious complex he founded became a recruiting centre. In 2009, he started an insurgency from Maiduguri. The Nigerian troops responded with heavy force. They captured the group’s headquarters, killed hundreds of its supporters and militants, including Yusuf. They claimed that Boko Haram was finished. They were wrong.

The group regrouped under Shekau. In 2015, it changed its name to the Islamic State's West Africa Province. Even after the Islamic State core was defeated in Iraq and Syria and its leader, Baghdadi, was killed, Boko Haram continued to remain a potent terrorist machinery. After retreating to the forest in 2016 in the wake of the government offensive, the jihadists started attacking security forces and civilians in 2018. The last two years have been deadlier for Nigeria’s security forces than any other period in the decade-long conflict, according to the U.S. Council on Foreign relations. Between June and November, more than 200 people have been murdered or kidnapped in and around Maiduguri.

The kidnappings in Katsina, Mr. Buhari’s home state, were particularly embarrassing for the President who had come to power on promises of ending jihadist insurgency. Five years into his rule, Boko Haram is still standing strong, expanding its reach from Nigeria to Niger and Cameroon. And if they were actually behind the Katsina kidnappings, it suggests that they are now expanding their operations across Nigeria.