Pakistani cleric Khadim Hussain Rizvi died suddenly in Lahore this Thursday. It found only a passing mention in the Indian media.

He was just 54, apparently in terrific health, which glowed on his broad, imposingly bearded face. Nothing you’d see and hear of him in the videos of his fiery speeches at his Dharna or siege of Islamabad just a couple of days earlier, would’ve suggested he’d drop dead. 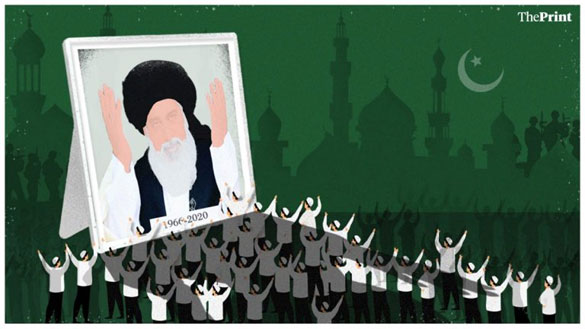 Covid was widely stated as the cause of his death, although the certificate from the hospital didn’t mention any cause. They just declared him “dead on arrival”. Autopsy? Viscera? You do not subject holy warriors to such indignities. Definitely not if they are also seen to be the favourite children of the powers-that-be. Which Rizvi was.

Sure enough, his sudden death has revived the social media conspiracy theory industry. He was apparently not under treatment for any illness, although there are informed rumours now that he was suffering from fever and breathlessness for the past few days. But watch those speeches, especially his last one where he taunts the government saying “What makes you think I need your permission for my Dharna? Does Pakistan belong to your daddy? (Tere pyo da haiga Pakistan?)” He doesn’t miss a breath.

I am sorry it loses much flavour and texture in translation from Punjabi. Especially from the distinctive version he spoke, from the region in Pakistani Punjab called Potohar. Located generally between the Jhelum and the Indus, this low plateau has always been the richest catchment area for the Pakistani army. It is one of the reasons a lot of the soldiery was under his influence. And he, in turn, was supposedly under the influence of the generals and their establishment.

Until, as it happens with all such characters, Osama bin Laden included, he grew too big for his jootis. His latest siege on Islamabad caused deep distress to the Imran Khan government and the establishment. He wanted closure of the French embassy, a parliamentary resolution breaking diplomatic relations, and repeatedly exhorted his followers and Muslims anywhere in the world to behead French President Emmanuel Macron.

He was blessed with the kind of clear diction and delivery rabble-rousing demagogues usually are. So you don’t even need much Punjabi to understand that he pronounces the Chechen teenager who beheaded Samuel Paty a ghazi (holy warrior), hailed all Muslims who carry out revenge attacks as such, and in one speech, asked all of Pakistan’s nuclear bombs to be dumped on France so that the “unholy land” ceases to exist.

It wasn’t, by the way, the first time he had given out such a threat to a European nation. In 2018, when Dutch politician Geert Wilders said he’d organise a competition to draw the prophet’s caricatures, Rizvi had promised to nuke the Netherlands as well. 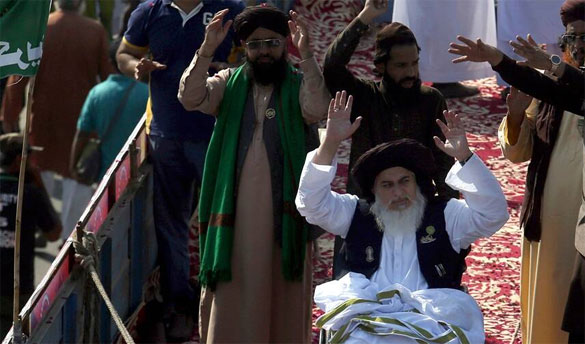 He agreed to unshackle Islamabad and go home, on his own terms as usual — flaunting a press release claiming the government had accepted all demands and that the National Assembly will pass a resolution breaking diplomatic relations with France. He’d gone too far for the establishment’s comfort now. It looks like coronavirus did not like this one bit!

Physically, Rizvi was born on 22 June 1966 in village Pindi Gheb near Attock. But politically, and in a way also spiritually — or if we are allowed to confect an expression ‘politico-spiritually’ — the Rizvi phenomenon was born on 4 January 2011.

This was the day politician Salman Taseer, governor of Pakistani Punjab (and father of author Aatish), was assassinated by Mumtaz Qadri, a constable in his security detail. Salman had written this death warrant the day he met Aasia Bibi, the poor Christian woman sentenced to death for blasphemy, expressed sympathy with her and also asked for the blasphemy law to be repealed. Qadri, apparently, was a follower of the Sunni Sufi Barelvi school of Islam, and Rizvi is its prominent cleric. He was then preaching at Lahore’s famed Data Darbar.

Qadri’s was the first cause Rizvi picked up and grew in prominence. He hailed him as a ghazi too, wanted him pardoned and proclaimed a hero for the faith, and dared the state to hold him guilty. The government stood firm.

Qadri was hanged at Rawalpindi’s Adiala jail on 29 February 2016. Rizvi led angry protests by his organisation, Tehreek-e-Labbaik Ya Rasool Allah (TLYRA). Labbaik is a reference from Muslim prayer and the name means, loosely translated, movement in the service of the holy prophet of Allah. Rizvi’s comrade and co-founder of TLYRA, Muhammad Afzal Qadri, also issued a call to kill all three Supreme Court judges who upheld that sentence. They could be killed, he suggested, by their security guards, drivers, or even cooks. Fortunately, nobody took his advice.

Rizvi’s star was now rising. As he grew in popularity among a rapidly rising population of angry, young, illiterate, unemployed men, especially in Punjab and parts of Sindh to its south, he was soon proclaimed an ‘Allama’ (a great scholar of the faith), a title he carried to his death. He hit the pinnacle of his power the very next year.

Mian Nawaz Sharif was in power. The Army, which treated Rizvi as their own as much as Imran Khan, would’ve been quite happy now to see the cleric lay siege on Islamabad, the first of many. The provocation was an apparently malevolent ‘amendment’ in the nomination form that a Muslim candidate has to sign while contesting elections in Pakistan.

It has a clause stating an unqualified and total commitment to the concept of Khatm-e-Nabuwat, meaning that you accept that Muhammad was the last prophet, there can be no successor, and you do not follow anybody else’s teachings. The nuance is that this would keep Ahmadiyyas out.

In the new nomination form, the clause was mentioned as a ‘declaration’ instead of ‘oath’, as in the past. This, Rizvi said, was a conspiracy against Islam and its Holy Prophet. The government said it was a clerical error. He wanted the language restored and the law minister, retired Justice Zahid Hamid, fired. He got both, proclaimed victory. The legend of Allama Khadim Rizvi was born.

He was back in 2018. Now, it was over the Supreme Court pronouncing Aasia Bibi not guilty and acquitting her. He called it a sacrilegious outrage and again laid siege.

By this time, the establishment was in a bind. It wasn’t easy to keep holding on to a poor Christian woman after she’d been acquitted, and when her case had acquired much prominence in the Western world. At one point, she was stealthily taken to Pakistan Air Force Base in Rawalpindi named after Air Marshal Nur Khan (PAF chief during the 1965 war), then flown out on a chartered plane to the Netherlands for asylum.

Rizvi hit more headlines. Like getting a film called Zindagi Tamasha banned on grounds of blasphemy. Apparently, it contained some criticism of the Ulema and also insinuated that ‘bachcha baazi’ (child sexual abuse) was rampant in those circles. A few college and university teachers were also assassinated or injured by young students on charges of blasphemy in Rizvi’s organisation’s name. But he denied any connection.

Rizvi had by now transformed his organisation into a formal political party: Tehreek-e-Labbaik Pakistan (TLP). His vote counts were rising, although not enough to win many seats. This is the other remarkable thing about Pakistan. That religious parties have great street power, but are never able to impress voters.

In his case though, the challenge was more complex. Because Imran Khan too was running his party and politics mostly in the name of conservative Islam. Play his 2019 speech at the UN General Assembly. How passionately he reminds the (Western) world that it must desist from anything that Muslims see as “maligning our Holy Prophet…it hurts us”. He was reading the blasphemy law to the world in English. Rizvi was saying the same thing in Punjabi. For the voter, there was insufficient product differentiation.

Rizvi is now gone. But the mass-appeal of fundamentalism among a burgeoning, young, illiterate, unemployed and angry population isn’t. Nor is the establishment’s need for such convenient instruments about to disappear. They will find another Rizvi, or maybe more, going ahead. Meanwhile, like most conspiracy theories in Pakistan, one about his sudden death might also endure.

Original Headline: What the amazing rise and sudden death of a ‘Holy Warrior’, Khadim Hussain Rizvi, tell us about Islam and politics in Pakistan