The Source of Muslim Extremism

Contemporary Muslim scholar Hamza Yusuf writes, “This insidious disease has a source, and that source must be identified, so we can begin to inoculate our communities against it.”

Indeed, that source is clear. Hamza Yusuf knows it and Muslims know it. We just did not want to deal with it, and instead, placed the blame on others. Let’s face it: it is the rogue interpretations and mistranslations of Quran by the villains of Islam that has created this mess.

They did it to Islam and got away with it. 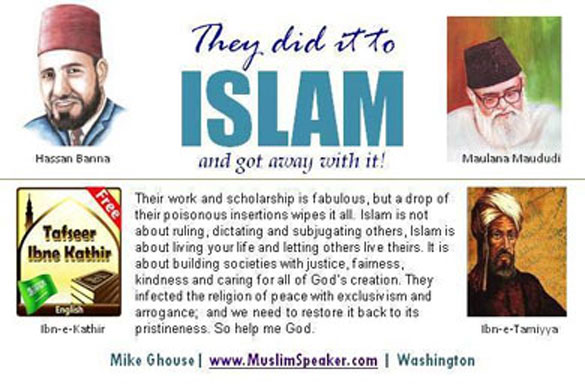 These villains are not the ones that we conveniently portray as Islamophobes, but they our own Muslim scholars like ibn-Tamiyah, ibn-Kathir, Maududi, Banna and others.  No doubt, they have written some good stuff, but all that so-called good gets wiped out with some of their poisonous write ups.

If we want Islam to be Islam, a religion of peace, we need to muster the courage to stand up and reject those interpretations that are anathema to the pluralistic nature of Islam. Those secondary books are mistakenly elevated to be divine by a few Muslims.  Bold actions are required.

Allah is not the enemy of Shias, Sunnis, Ahmadiyyas, Jews, Christians, Hindus, Gays, Lesbians, Buddhists, Atheists, Pagans and others, as many Muslims wrongly make Him out to be.  They have reduced the universal God (Rabbul Aalameen) to a private God owned by them and acting for them.  This simply is unacceptable.

Prophet Muhammad (pbuh) is a mercy to mankind, but if you ask Asiya Bibi, Naderkhani, Lena Joy, Abdur Rahman and a host of others who have been charged with blasphemy and apostasy, they have difficulty in seeing the Prophet as a mercy to mankind. How can they see it, if the radicals among us harass them in the name of the Prophet?  Many Muslims know that the apostasy and blasphemy laws are not rooted in Islam, yet they have remained silent.

All this venom in the name of Islam is coming from a single source; the secondary books. The Quran is the only authentic book and we cannot go wrong with it.  Until we reject those other books, we don’t have a prayer.

Sharia as practiced is not divine, and divine by definition should be flawless; Sharia laws cannot be divine by any stretch of the imagination.  It was a body of law created by men with the intent of serving justice to fellow beings.  Our own Constitution is a human effort and has been amended 27 times to correct the flaws. To err is human and Sharia law has major flaws that need fixing in order to reflect God’s law which cannot be anything but justice, fairness, kindness and mercy.

We cannot pass the buck and discount our critics as “Islamophobes.” Al-Baghdadi quotes Ibn Hisham’s biography of the Prophet for his evil acts. That book is wrong and unfortunately many a Muslims are not aware of that. Pamela Geller, Robert Spencer, Brigitte Gabrielle are not cooking up, they are simply quoting what is written up in Hadith, Tafseer and Seera even though they know it is wrong and at times discounted Hadiths.

The good news is 99.99% of Muslims live their lives and let others live theirs. But that 1/10th of 1% is enough to create a mess. Why should they listen to you, when they have those books to give them their legitimacy?

Terrorism will continue until those bad books are replaced with the correct ones. We cannot force any one to believe otherwise, we have to work with those who are diametrically opposed to us, and plan on bringing common goodness to all in two or three generations. It has to be a gradual process of reason and logic involving everyone.  Any attempt to quick fix will back fire and worsen the situation. Believe me they’ll hold on to their dear books.

Let’s stick to the Quran, we simply cannot go wrong. I know this frightens many; it is, as if pulling the rug from under their feet. In reality, you can live a moral and conscious life by simply following the Quran.  Rejecting those other, so-called Islamic books will not disorient you at all.  Personal Sharia is fine, but the public Sharia needs to be amended (references below).

As a first step towards fixing our problems, we need to rehabilitate the Hadith. A new compilation of Hadiths is the need of the day, it will have two sections. The first section will reflect those Hadiths that are compatible with the statements that God is just and the Prophet is a mercy to the mankind; the second section will include all the questionable Hadiths for the scholars to prove their authenticity.

We are afraid of questioning the old-time scholars, many of whom were insensitive to fellow humans who were not Muslims, as they were not raised in the pluralistic environment that Prophet Muhammad lived through.

The man who writes the biggest check for the mosque can shut down the others, and they don’t even make an effort to present their point of view and abandon the good ideas.

Prophet Muhammad had said let the left hand not know the charity you give by the right hand, and he added, let no one be humbled down by your favours. If you are a contributor, I urge you to follow the Prophet and not treat the recipients as your slaves.

Most Muslim leaders follow the idiom “Monkey see, monkey do”, that is, we will do it if others are doing it. They lack conviction and don’t have the courage to be the first.

Leadership is not appeasing friends and members of the mosque but leading the community through the Pul-Sirat, i.e., the difficult road.

God has blessed us in America; we are a free and the brave people. If we cannot take the responsibility to fix the problems and boldly take out the germs that have infected the way Muslim have understood Islam, I think no one else in the world can do it.

It is time to take back our religion. I will be happy to boldly stand with all Muslims who want to see Islam as a religion of peace, not only in words but in deeds.  Here are a few pieces;

Quran is not for Muslims - huffingtonpost.com/mike-ghouse/quran-is-not-for-muslims_b_6174940.html

Pristine and Mangled up Islam - huffingtonpost.com/mike-ghouse/two-islams-the-mangledup-_b_5748280.html

For the heck of it, please check at least five translations of the verse 3:85 and see how messed up they are. Meanwhile, I will finish writing an article on 3:85.   Of course, everything written above applies to all faiths, but that does not abdicate our responsibility to fix our own problems.

God bless the world and every one in it.

Dr. Mike Ghouse is community consultant and a speaker on Pluralism, Interfaith, Islam, politics, terrorism, human rights, India, Israel-Palestine, motivation, and foreign policy. He is a pluralist, thinker, writer, activist, news maker and an Interfaith Wedding officiant . He is committed to building cohesive societies and offers pluralistic solutions on issues of the day. More about him in links at MikeGhouse.net