Intolerant Islam Is On the March in Indonesia: Islamic Parties Used To Be the First to Come To the Defence of Religious Minorities, But No Longer

IN the country that is home to the largest number of Muslims on the planet, Islamic political parties have never managed to command a majority in national elections. And there have been Muslim leaders more willing than mainstream politicians to jump to the defence of religious minorities under attack.

Yet intolerant Islam is on the march. The last synagogue on the crowded island of Java, sealed off by Islamic radicals since 2009, was torn down in May. On Lombok, not far from the Australian playground of Bali, there are families of the Ahmadiyah Muslim sect still living in camps after they were driven from their homes as heretics seven years ago. 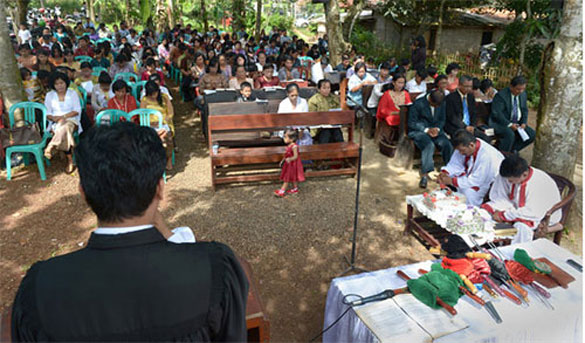 This is Indonesia, where home-grown and imported variants of Islam jostle with a new democracy and rapid economic development. Also in play are other great faiths, Christianity and Hinduism included, and less well-known traditions, such as Javanese spiritualism. The results are by turns paradoxical, reassuring and worrying.

The campaign of terror that peaked in the Bali bomb attacks has been checked, by and large, by tough, often lethal, police action. But beyond the headlines there has been a change in the mood and outlook of mass Islam that no neighbouring nation can ignore.

Singapore-based scholar Martin van Bruinessen is editor of a new book with a misleadingly bland title, Contemporary Developments in Indonesian Islam, that sets out to explain the "conservative turn" in the faith of more than 200 million people who live on our doorstep.

"If you ask me what I find threatening in Indonesian Islam, it's not the terrorism," van Bruinessen says. "Terrorism has been reduced to a level that society can live with. The police are efficient; they will catch most of the would-be terrorists.

"It is this conservative trend that I find much more worrying than terrorism. It reduces the freedom of minorities in the first place, and the freedom of many people within the Muslim majority to develop their views."

Not so long ago, when the dictator Suharto was still in power, Indonesia was celebrated for presenting a "Islam with a smiling face". Behind the scenes, of course, not everything was bliss. Muslim groups were prominent in the mass slaughter of "godless communists" after the 1965 coup. And the rebel fighters of Darul Islam, a post-war movement demanding an Islamic state, held territory as late as 1963 and continue to inspire today's Jihadis.

Even so, after Suharto's fall in 1998 there was an undeniable upsurge of violent inter-communal conflict, Jihadi movements, terror attacks and agitation for sharia law. Things are calmer now but there remains a corrosive level of religious intolerance and thuggery - and authorities are too willing to look the other way.

Every year the West has fewer experts to explain to outsiders what is happening in Indonesia. At work are profound changes in the academy, its funding and the interests of students. Now retired, van Bruinessen is a member of that fast-disappearing breed of specialists in Indonesian Islam.

The University of Melbourne's Tim Lindsey is acutely aware of this, which is why he has set up the Centre for Indonesian Law, Islam and Society. He hopes to pass on the knowledge of retired experts and to encourage a new generation of scholars.

There is a lot at stake. "This is incredibly important for Australia's future," he says. "The issue about Islam in Indonesia is not terrorism. The position of Islamic political parties in Indonesia, where Islam as a religion will stand in the constitutional and civil arrangements of the state - there are really big issues that Indonesia is still working through.

"Questions of religious intolerance, of Islamic hardliners attacking people they think are doctrinally unsound - these are serious questions of human rights and the role of government; these are mainstream questions."

British anthropologist Andrew Beatty saw these questions worked out intimately in village life in East Java, where he went to live with his family in 1992. The result was a fascinating, rather dispiriting book: A Shadow Falls in the Heart of Java.

"This was an island where people of radically different ideology - orthodox Muslims, Hinduised mystics and animistic peasants - managed to live together in harmony," he writes. "But the Java we first knew and the Java we left in 1997 were different places.

"The transformation - long prepared but still unexpected - was quite sudden and shocking. A puritan, ideologically driven Islam had made rapid progress, pushing aside older traditions, disturbing an ancient pact that allowed ancestral spirits and pre-Islamic deities a place among the prayer houses.

"The gentle world that we had known - of Muslims and mystics, of dancers and shadow plays - was in eclipse. And with the rise of an assertive (Muslim) piety, neighbourhoods and communities were splitting. Inside every family a struggle over the faith was taking place. And not only in Java. Repeated wherever Muslims live, this will decide the future shape of the Islamic world.

"Indonesia ... shows us better than anywhere how to live peacefully with cultural difference. That diversity and respect for pluralism are now under threat. Almost uniquely in the Muslim world, Java still has the cultural means to confront the challenge. It has lessons for us all."

What Beatty chronicles at village level, van Bruinessen's book analyses within mass movements as important in Indonesia as they are unknown to most Australians.

The Muhammadiyah and Nahdlat ul Ulema are the two leading Muslim associations of Indonesia. With about nine million and 38 million followers respectively, these are "probably the largest and most complex organisations (in) the entire Muslim world," van Bruinessen says.

Founded in 1912 by an official of the Yogyakarta sultanate, the Muhammadiyah set out to steer a middle course between accommodation of old Javanese culture and a reformist purging of practices alien to Islam, such as intercession of saints and magic.

The bigger and more traditional Nahdlatul Ulema appealed to villagers and local businesses that clung to a much wider range of practices and beliefs than those sanctioned by the reformist canon of the Quran and the sayings of Prophet Mohammed.

NU produced Abdurrahman Wahid, who parlayed his opposition to the Suharto regime and political Islam into a historic role as Indonesia's first elected president in 1999.

As a modernist organisation, the Muhammadiyah and its urban middle-class supporters built up a vast network of schools, colleges, universities, hospitals, orphanages and mosques. By the middle of the 2000s, both Muhammadiyah and NU faced infiltration by organisations linked to radical Muslim groups operating internationally. One of these challengers, Hizb ut-Tahrir, which hankers for a global caliphate under Sharia law, also has a foothold in Australia.

What happened in Indonesia is recounted in van Bruinessen's book by Ahmad Najib Burhani, a scholar at the Indonesian Institute of Sciences.

In 2005, there were attempts to co-opt Muhammadiyah mosques, schools and universities by activists of a radical movement that took shape as a political party, the Prosperous Justice Party, inspired by Egypt's Muslim Brotherhood.

Conservatives within the Muhammadiyah, already in the ascendant, shared some common ground with Muslim Brotherhood ideology. Yet they joined forces with Muhammadiyah liberals to protect their organisation against the PJP.

A few years later, when the Muhammadiyah staged its 2010 congress in Yogyakarta, staff wore Javanese costumes, complete with ceremonial daggers. There was Javanese music and dance, reflecting an organisation more at ease with local culture and less hidebound than was thought. But the struggle between liberals and progressives has left the Muhammadiyah unstable - only "shakily moderate", in Najib's formula - and this is one reason Abu Bakar Bashir, spiritual leader of the Bali bomber group, has dismissed it as banci, an Indonesian word meaning hermaphrodite or sexless.

As for the PJP, it has had a dramatic fall from grace because of a corruption scandal to do with Indonesia's beef import quota, a reminder that there is more to this trade than the troubles of Australia's cattle industry.

This pattern - of troubling shifts in Indonesian Islam that, under analysis, offer some reassurance - is repeated in the book chapter on Solo, the city in central Java notorious for Jihadi groups and for vigilantes who harass Westerners in hotels and bars. Yet, as scholar Muhammad Wildan points out, there has been no serious push to impose Sharia locally.

And it is the very weakness of orthodox Islam in Solo that gives these groups their "radical edge", for the city is a peculiar stronghold of Java's court tradition, which inter-mixes Hindu, Buddhist and animist elements. "Only a fraction of society supports the Islamic radical groups in the city," Wildan says.

The van Bruinessen book also charts the paradoxical failure of a Sharia campaign in South Sulawesi, a region with a long history of militant and rebellious Islam. Even here, it may be that "Sharia is not a very marketable political commodity", says researcher Mujiburrahman.

Yet another chapter follows the Suharto-era Indonesian Council of Muslim Scholars as it struggles to reinvent itself as a servant of a divided Muslim community. After the 2001 attacks in New York it contrived to condemn terrorism without abjuring warlike jihad, thereby exposing itself to criticism from hardliners as well as progressives. Academic Moch Nur Ichwan says some of its other Fatwas on public morals, religious pluralism and minorities "have been used or abused" by Islamists to foment intolerance and violent conflict, including expulsion of Ahmadiyah families from their homes in Lombok.

He says: "Many critics consider (the council), because of the disproportionate influence of the relatively few radical members and the absence of balancing progressive voices, as a potential threat to human rights, freedom of thought and freedom of religious practice and conscience."

In van Bruinessen's book, there is a tension between deep unease and reassurance. He says: "I am worried and I want my readers to be worried, but I also want them to see that things cannot be reduced to a simple black and white view. There is resilience, there are still many liberals, many progressives, but they are no longer the dominant voice in Indonesian Islam."

Much of it is mainstream, not Muslim, politics, he says, as President Susilo Bambang Yudhoyono and his rivals play the religious card. If intolerant Islam always had its backers in Indonesia, democracy has amplified them.

"It is true that democratisation opens space for many new voices, including intolerant voices," van Bruinessen says. "(But this is) a fairly dangerous hypothesis because it might lead you to anti-democratic conclusions."

One remedy that may surprise some is for Australia to keep up close relations with Indonesia's military as more and more officers who know nothing but democracy rise through the ranks.

Retired brigadier Gary Hogan, who served as defence attaché in Jakarta, argues there is a lot to be said for perpetuating personal ties with Indonesia's military and helping it to modernise culturally. Hogan has in mind two objectives vital to our national interest.