Pakistan: Killing in the Name of the Prophet

1.    Priyantha Kumara, a Sri Lankan, was lynched by an Islamist mob in Sialkot, Pakistan, after being accused of blasphemy.

2.    The Tahreek e Labaik and the Pakistani establishment must be blamed for whipping up this religious frenzy amongst people.

3.    Muslim apologists are again saying this has nothing to do with Islam; such an attitude only prohibits a free and frank discussion about the pernicious role of Islamism.

Priyantha Diyawadana, a Sri Lankan man was tortured and burnt to death in Sialkot in Pakistan on Friday for allegedly desecrating poster of that contained salutations ("Durood") on the Prophet

The torture and subsequent murder of a Sri Lankan man in Pakistan’s Sialkot should put all Muslims to shame. Priyantha Kumara was a religious minority, working at a senior management level at a garment factory. The local police have said that Kumara took down a Tahreek e Labbaik Pakistan (TLP) poster and threw it in the dustbin which seems to have enraged the Muslim mob which eventually killed him. It is possible that like many of the posters of the TLP, there would have been some Quranic verse written on it. But it is also true that not being a Muslim, Kumara would have understood it as just any other political poster and decided to take it down from an office space. The mob that killed him argued in front of the camera that he tore up a verse which had the name of Mohammad written on it. They argue that he committed an act of blasphemy by disrespecting the prophet of Islam and hence was liable to be killed. From the reports available, it seems that the proletarian mob first tortured him, then killed him and burnt his body on the road. In the Muslim mind, burning the dead is to make sure that he does not go to heaven. The hatred for another religion cannot be more apparent.

The video of the burning body is bone chilling, to say the least. But equally problematic is the justification of murder that Muslim men are giving on camera. These are all young men, and one would have thought that they would have dreams of a different nature. But one is completely wrong when one hears them speak without any remorse. They seem completely convinced that it is incumbent on Muslims to kill anyone who disrespects the prophet or Islam. One can only imagine the extent of indoctrination that these youths would have gone through to be able to transform a gruesome murder into a pious act commanded by their religion. Throughout the video, men are heard raising slogans like “Nara e Takbeer”, “Labbaik Ya Rasool Allah” and “Gustakh e Nabi ki Ek Hi Saza; Sar Tan se Juda, Sar Tan se Juda”. What is more troublesome is that once can clearly hear voices of children echoing such slogans. It is beyond comprehension what such negativity and hatred will eventually do to such young impressionable minds.

The Imran Khan government has been quick to condemn the “incident”. But condemning is always the easy part, the harder part is to give justice to the victim and his family. But it is an open question whether the government will be able to do. After all, a large part of the problem seems to be emanating from the government itself. Just last month, Imran Khan’s government surrendered before the fanatics of the TLP. As a party and religious organization, the TLP demands that any act of blasphemy should be dealt with the severest form of punishment. Its’ campaign has transformed the murderer Mumtaz Quadri into a saint. The series of blasphemy related lynching that have recently taken place in Pakistan has happened after the TLP made it into an issue of Muslim prestige. By surrendering to the demands of the TLP, the government has already indicated which side it is on. In fact, there are even unconfirmed reports that Imran Khan’s party might enter into an alliance with the TLP in the next elections. 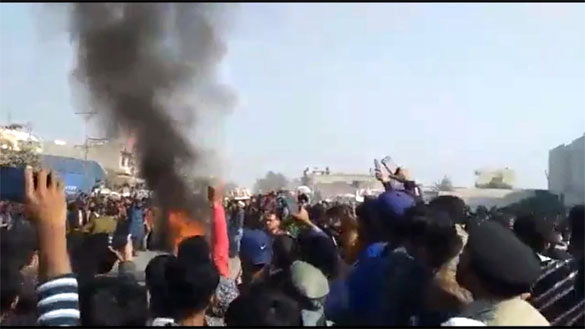 A screengrab of a video that was recorded when the Sri Lankan factory worker's body was burnt.

The Islamization of the Pakistan is possibly complete. In the name establishing the “state of Medina”, the Imran Khan government is bringing legislations which will destroy whatever good there exists within the Pakistani establishment. Whether it is the implementation of Single National Curriculum which brings Islamic inspectors into classrooms or whether it is his larger campaign of fighting against so called Islamophobia, Imran Khan’s Pakistan is making Islamism into a master narrative of the nation. In the immediate future, this might give the government some respite from its all-round developmental failures, but in the long term, it will take the nation onto the path of an orthodox exclusionary Islam.

Certainly, the current Pakistan establishment is not solely responsible for this descent into Islamist madness. Zia ul Haque and his Islamization policy did much harm to the society and even the polity. Through the establishment of separate Shariat courts and Hudood ordinances, he bolstered the influence of the conservative Ulama. Many such Islamists were appointed in different positions of the government including the Council of Islamic Ideology which was supposed to “guide” the elected representative in Parliament. But even before that, the secular Zulfiqar Ali Bhutto gave in to the fanatic demand of Islamists and declared the Ahmadiyya Muslims as beyond the pale of Islam, thus effectively depriving them of their religious rights as Muslim citizens.

Every time a blasphemy related murder happens, it is important to recall and retell this genealogy. It is also important to call it for what it is: religious- in this case Islamic- fascism. This ideology believes that there is only one way of being a Muslim and therefore all other ways being Islamic is necessarily blasphemous. Islamo-fascism draws sustenance from Islamic texts which justify this kind of brutality and at times even recommends it. In the wake of Sialkot killing, there are many who would say: this is not Islam. The problem is that there is enough within Islamic literature which legitimizes such murders. Even those who have condemned the killing have done so on the grounds of technicality. They argue that only the state has the power to punish such “errant individuals”. In other words, the difference is about who has the authority to kill not on the act of killing itself. And that’s precisely the problem: Islam has neither the understanding nor the capacity to withstand any critique of its own value system. Partly it flows from their erroneous theology which tells them that theirs is the best and final religion.

It is understandable that some Muslims today become revolted to see such images emanating from within their community, but the solution does not lie in repeating that this is not the teaching of Islam. The solution lies in a radical departure from the extant reading of the text. The solution lies in openly stating that if certain parts of Islam advocate murder and pillage, then it is wrong and hence not incumbent on Muslims to follow it.