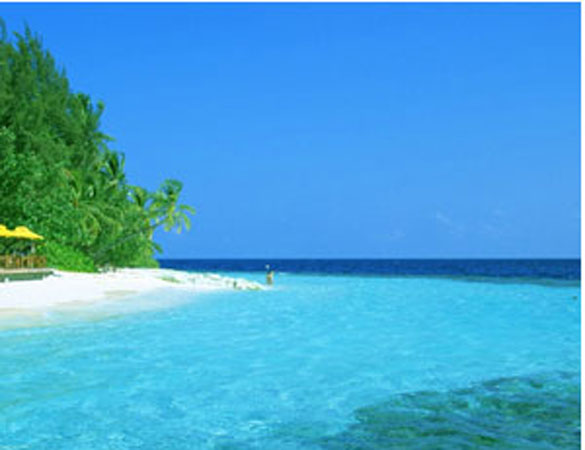 Saturday’s attack on a group of people silently protesting against religious intolerance is just the latest in a series of orchestrated, well-choreographed acts of violence, hatred and intolerance sweeping across the nation in recent months.

Independent journalist and blogger, Ismail ‘Hilath’ Rasheed, whose personal blog was censored by the Maldivian government last month, was among those attacked, sustaining serious injuries to the head. Others who attempted to intervene also suffered minor injuries.

Ahmed Hassan, one of the protesters, said, “We planned a silent sit down protest in order to make a statement over the lack of religious freedom for minorities, especially those who aren’t Sunni Muslims.”

“We are entering the fourth year of democracy but unfortunately, many basic freedoms and rights have yet to be achieved for all Maldivians. It is unacceptable in this day and age that non-Muslim Maldivians are discriminated against in their own country,” he said. “This is their country as much as ours.”

He further added “I would like to say to those that attacked us today that violence is not a part of Islam. Islam is a religion of love, peace and shura (consultation). The unprovoked attack is clearly an act of intimidation. We realize that as our movement grows, we could face many more such attacks, but we will not be backing out. We will not be intimidated into silence.”

Local writer and blogger, Aminath Sulthona, who was also among the protesters said, “These are not people worthy of being termed ‘religious’, but they are misguided thugs spreading terror and violence in the name of religion.”

Sulthona complained that the police at the scene failed to carry out their duties. “I was being openly threatened and verbally abused in the presence of a police officer who paid no heed to the man… I managed to take pictures of the attackers, but as soon as I got home I started receiving calls saying I would be attacked on the streets if the pictures were leaked.”

The injured protester, Hilath, has also previously faced death-threats over his vocal criticism of Islamic radicalism on his personal blog.

As the rest of the world celebrates the International Human Rights day to commemorate the adoption of the UDHR, a network of NGOs in the Maldives and seven political parties are preparing to conduct a large protest on December 23 – with organisers vowing to assemble a rather ambitious 100,000 protesters, including mothers and their newborns, in order to ‘protect Islam’.

The protests were announced in the aftermath of a speech delivered in parliament by Navi Pillay, the visiting UN High Commissioner for Human Rights, after she sought the removal of discriminatory clauses in the Constitution towards non-Muslims, as well as an open debate on the subject of degrading punishments like public flogging that are still practised in the Maldives.

Pillay argued that flogging as a form of punishment was “cruel and demeaning to women”, while pointing out that apart from just one other Islamic country, the practice wasn’t condoned even among Muslim nations.

Available statistics appear to support the claim that women are disproportionately affected by punishments such as flogging. Mariyam Omidi, then Editor of Minivan News, reported in a 2009 article that according to government statistics, out of 184 people sentenced to flogging for ‘fornication’, 146 were women.

However, the report was met with outrage from conservative sections of the public who gathered with placards at the same venue where the protesters were attacked yesterday, and demanded that the journalist be deported.

There was simply no room for intelligent discussion on the subject and the offending statistic mysteriously disappeared from government websites not long afterwards.

Similarly, the response to the UN Human Rights Commissioner’s recommendations has been a brutish all-out war on the very idea of having a debate on the subject.

One gimmick to rule them all

One might wonder how in a country where Islam is safeguarded by the Constitution, and where there is overwhelming support among both leaders and the general public for mandating Islam’s role in state affairs, and where educating the public on other religions is not only taboo, but also illegal by law – could there still exist such insecurity among citizens that they need to rally in order to ‘protect Islam’.

The explanation is simple.

For 30 years, former President Maumoon Abdul Gayoom carefully consolidated the state’s authority over personal beliefs by successfully selling the idea of a ‘100 percent Sunni Muslim’ nation, and making the Dhivehi Identity virtually synonymous with Sunni Islam, which needed to be fiercely protected at all times from ever-present, invisible threats.

One of Gayoom’s most damaging legacies is that a paranoid Maldives found itself among the top ten countries in the world noted for religious intolerance, according to a study by the Pew Forum on Religion & Public Life published in 2009.

Employing religion to keep his citizens in check was a master stroke that ensured him a long reign, but Gayoom’s chickens came home to roost in the dying days of his regime when the democratic uprising threw up a medley of ultra-conservative mullahs who would take over the religious mantle from Gayoom.

Following the first democratic Presidential elections, the ultra-conservative Adhaalath Party assumed control of the newly created Ministry of Islamic Affairs, and took upon themselves the onerous responsibility of deciding who were the ‘true Muslims’ and what constituted ‘true Islam’.

It didn’t help matters that despite the freedom of speech granted by the constitution, the mainstream Maldivian media continues to exercise strict self-censorship when it comes to issues of religion and human rights.

The subject remains taboo among other public institutions and agencies as well, as evidenced by the statement released by the Maldivian Human Rights Commission yesterday on the occasion of Human Rights day, which glaringly omits any mention of minority rights or non-Muslim Dhivehin.

Speaking at a National Awards ceremony last month, President Nasheed gently rebuked his citizens for reacting ‘in a Jihadi manner’ over the Navi Pillay controversy.

Instead, he exhorted the citizens to “have the courage to be able to listen to and digest what people tell us, what we hear and what we see”

President Nasheed would have done well to foster this spirit in his own government which, in the first few months after coming to power, shut down several websites that were allegedly critical of his then coalition partner, the Adhaalath Party.

Less than two weeks before he implored his citizens to have the courage to digest others’ opinions, President Nasheed’s government banned the blog of independent journalist Hilath who had been critical of Islamists in the government.

Even more startling was the reaction of his foreign Minister, Ahmed Naseem, to the controversy over Navi Pillay’s recommendations for doing away with degrading punishments.

“You cannot argue with God”, he said, in what was a clear surrender to the politics of bigotry.

The President would also do well to convey his ideas to his erudite Islamic Minister, Dr Abdul Majeed Abdul Baree whose response to the call for open discussion on the subject was merely, “No Muslim has the right to advocate against flogging for fornication.”

The Islamic Minister had also previously condemned the presence of commemorative monuments presented by participating nations in the recently concluded 17th SAARC summit in Addu.

The destructive outcome of emotive politics of hatred, strife and fear was clearly demonstrated by the hyper-paranoid religious vandals who burnt, damaged and stole multiple SAARC monuments because they allegedly depicted ‘idols of worship’.

One police officer on duty guarding the monument recollected being approached by hostile members of the general public asking why they were guarding “temples”.

The opposition parties, seeing political expediency even in the most unfortunate acts of xenophobic vandalism, quickly hailed the vandals as “national heroes”.

In a related incident, some MPs of the Progressive Party, including MP Ahmed Mahloof apparently hijacked a ferry in a valiant effort to save Islam from a banner hung at the International Airport, before they were intercepted by the Police and diverted to another island.

The offending banner at the airport depicted an image of Jesus Christ, a Buddhist chakra, and other religious motifs symbolising the religious diversity of South Asia, which the design consultants who came up with the concept said was in keeping with this year’s SAARC summit’s theme of ‘Building bridges’.

Notably, none of these MPs had anything to say on the young non-Muslim Maldivian man who hung himself from a tower at that very airport in July 2010, following immense pressure from family and state religious authorities after he, in his own words, “foolishly admitted (his) non-religious stance” to friends and colleagues.

If the 17th SAARC Summit proved anything, it is that building bridges is impossible when there are greedy political trolls ready to pounce on anyone willing to cross it.

The seemingly endless series of ugly incidents and violence carried out in the Maldives in the name of Islam only reinforces the reputation of Islam as an intolerant, backward religion fit for narrow minded thugs who are incapable of dealing with 21st century realities or co-existing peacefully with the international community.

According to a March 2011 Universal Periodic Review Report for the Maldives, the Maldivian government had pledged to raise awareness and public debate around the issue of freedom of religion and religious tolerance.

The report states that “The Maldives commits to begin domestic awareness-raising and an open public debate on religious issues. Moreover… the Maldives requests international support to host, in 2012, a major international conference on modern Sharia jurisprudence and human rights.”

However, this may be a difficult task given the sense of over-entitlement prevalent among sections of the Maldivian public that, though it demands – nay depends – on foreign aid, income and expertise to keep their families clothed and fed, nevertheless scoffs at the very thought of having to fulfil any obligations to the international community at large.

When confronted by the UN Committee on the the Elimination of Racial Discrimination in August 2011 on the constitutional clause depriving non-Muslims of citizenship, the Maldivian delegation reportedly had this to say:

“It was not true that under the new Constitution existing citizens could be arbitrarily deprived of their nationality if they were to stop practicing Islam… The Muslim-only clause under the citizenship article of the Constitution only applied to non-Maldivians wishing to become naturalised.”

However, just one month later, the government published new Regulations under the Religious Unity Act of 1994, making it illegal to propagate any other religion than Islam, or to be in possession of any material or literature that contradicts Islam. Any violations of the regulations would carry a 2 to 5 year prison sentence.

In other words, as the silent protesters attacked in broad daylight yesterday learned, the struggle to achieve universal human rights in the Maldives is a seemingly impossible and uphill task that only keeps getting harder, thanks to the cesspool of paranoia, hatred and violence generated by a band of short-sighted politicians who are happy to abuse religion and opportunistic religious clerics who dabble in politics.

As with last year, where a motorcade of fundamentalists rode around the capital yelling loud anti-Semitic slogans about visiting Israelis, this year too the Human Rights Day has been marred by gloomy incidents of intolerance that only remind us of how the idea of mutual respect and civility still eludes us as a nation.

All comment pieces are the sole view of the author and do not reflect the editorial policy of Minivan News. If you would like to write an opinion piece, please send proposals to editorial@minivannews.com