Rise of the Jehadis

In 2003, Patrick Cockburn of The Independent went to al-Dohra power station in the southern part of Baghdad. He had received word that an American soldier had been shot there and another had been wounded. This was in the early summer, before the insurgency broke out in northern Iraq. Jubilation in Washington continued about the success of the Iraq War. On May 1, United States’ President George W. Bush went onto USS Abraham Lincoln, an aircraft carrier, and declared victory in front of a large sign that read, “Mission Accomplished”. Iraqi President Saddam Hussein remained at large, but few in Washington doubted that he would soon be captured. The killing of the soldier in Baghdad was seen as the last gasp from the loyalists of the Baath Party and the Fidayeen militia. 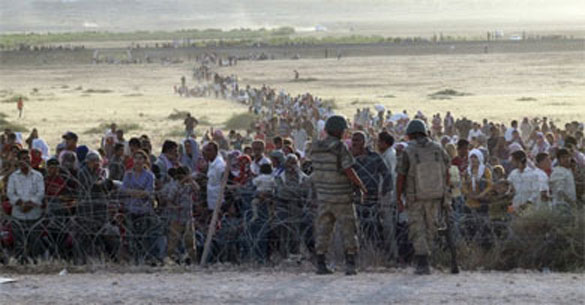 Syrians fleeing I.S. militants. Crowding behind the border fence with Turkey near the town of Suruç, on September 18. Photo:Kadir Celkcan/Reuters

Embedded journalists typically would not have wandered over to al-Dohra to talk to the local residents about the event. They would either wait in the gradually built-up Green Zone in the heart of Baghdad to hear the daily briefings from the U.S. authorities, or go out with the U.S. troops as embedded reporters. The flavour of Baghdad simply was not of interest, or could not be grasped. Cockburn’s visit to the power plant told him a great deal. The local people were milling around at the scene of the attack. Mohammed Abbas, who lived nearby, said: “We think they deserved it. We admire the bravery of those who attacked them.” Another man who stood near the dried blood on the pavement said: “We are very poor but we will celebrate by cooking a chicken. God willing, there will be more actions like this.” It was clear to Cockburn at that point that the incipient insurgency not only would be a serious challenge to the U.S. occupation, but would be supported by the population. This is precisely what happened.

Journalism of the People

His is a journalism of the people, with the reporter in search not of the dramatic instance but of the ordinary gesture, the mood of the people. It is, after all, the sentiments of a population that enable the reporter to assess events—how people see them and in which direction the events might go. His 2006 book on Muqtada al-Sadr, Muqtada al-Sadr and the Fall of Iraq, captured precisely the rise of the Shia politics in Iraq, a majority population that felt that its social and political lives had been suppressed during the Saddam years. But al-Sadr had not turned merely to sectarian politics. He had drawn from his sectarian base to attempt an alliance with the largely Sunni insurgency in Anbar Province to incubate a new Iraqi nationalism. It was a historic sign to link communities that seemed at odds with each other and to use the antipathy to the occupation to rebuild the nationalism that had withered in the two decades before 2003.

Two major social processes went against al-Sadr’s attempt. First, the “sanctions decade” of the 1990s had broken Iraqi society, turning neighbour against neighbour and community against community. What conviviality had been formed as a way to struggle through the suffocation of the Baath regime from 1978 onwards was smothered by the U.S.-driven and U.N.-administered sanctions regime. By the time the U.S. invaded Iraq in 2003, 60 per cent of Iraqis had no clean water and more than 80 per cent of the schools had been utterly run-down. It was always going to be a struggle to revive Iraqi society. Secondly, the U.S. occupation would not countenance an insurgency that could be the social process to bring Iraqis together. In fact, the U.S. went in the opposite direction, driving a firm sectarian wedge between Shias and Sunnis in order to control the fractious country better.

The origins of the Islamic State (I.S.) are, of course, in Iraq. They are certainly in the sectarian soup that boiled over in the civil war of 2006-07, a period that set in motion Al Qaeda’s transition from a marginal group to a major player in certain pockets of northern Iraq. The Jihadis Return: ISIS and the New Sunni Uprising, Cockburn’s slim book on the I.S. traces its origins in the several Sunni uprisings in northern Iraq, most recently in the crackdown against the largely peaceful protests as part of the Arab Spring from 2011 onwards. A particularly bloody crackdown in al-Hawija allowed the fighters of the I.S. to make the case that civil disobedience led to certain death while their method might actually succeed. Chaos in northern Syria allowed the I.S. to stretch its wings across the border and draw in communities that had been seen as marginal not only by the government in Damascus but also by the rebels who operated in a north-south axis from Daraa to Aleppo. The northern city of Raqqa fell to I.S. hands in the summer of 2013, cementing their control over the region long before they took Mosul in northern Iraq.

Cockburn’s journalism runs from ground-level incidents to geopolitics seamlessly. The story of the I.S. is not merely the tale of an insurgency in Iraq gone sour. It is also linked to a longer narrative: the use by Saudi Arabia of its vast oil wealth to nurture generations of Jehadis, both in the kingdom and outside it. Saudi Arabia has been given a free pass to continue with its two-faced politics, telling the West that it is doing its best to quell extremism and privately funding the Jehadis to go on their adventures in Iraq and Syria. The U.S. knows very well that it is Saudi Arabia that is responsible for the miserable growth of the most extreme forms of Salafi extremism in the region; the U.S.’ elected officials, such as John McCain, cheered on the Jehadis in Afghanistan and Syria, finding them to be useful cannon fodder for games that were played on a global chess board (whether against Iran or Russia). Cockburn shows how it was Gulf Arab money and intelligence services that ousted the peaceful protesters in Syria and replaced them with their own extreme proxies. There was no question that by early 2012 the Syrian war had been hijacked by agendas that emerged from the Arabian Peninsula and the West. Revolutions, Cockburn writes, “are notorious for devouring their earliest and most humane advocates, but few have done so with the speed and ferocity of Syria’s”.

On November 15, the I.S. released a gruesome video that offered their own view of their history. Like Cockburn’s book, the I.S. locates its origins in the fires of the anti-U.S. insurgency. The difference is that their video reeks of sectarianism and blood, a diatribe against the “unbelievers”, who are, largely in their eyes, Shias. It uses harsh language against the Rafidhi (he who rejects), a derogatory word for Shias, and for the shirk (idolatry) that has taken hold in Baghdad. Brutal images of the slaughter of Iraqi and Syrian soldiers, seen as standards of Shias, are matched in the video by images of the children killed by Syrian air force’s barrel bombs. The I.S. boasts that its soldiers are “hungry lions whose drink is blood and play is carnage”. A brutal episode of the beheading of a row of Syrian soldiers suggests that the I.S. cannot be built without the mass slaughter of Shias. It was ingenious of the I.S’ leader, Abu Bakr al-Baghdadi, to anoint himself the Caliph and to call upon all Salafi groups to pledge their loyalty to him. This is precisely what is happening. Going beyond a claim to mere terrorism (the path of Al Qaeda), the I.S. now has planetary ambitions, built, however, on the meanness of sectarianism.

In 2003, Cockburn had been to al-Dohra power plant that had been bombed by the U.S. in 1991. It worked at a quarter of its capacity through the sanctions era. Blackouts became a frequent occurrence in Baghdad because of this. The U.S. occupation hired German and Russian firms to take over the repair of these plants in 2003. By April 2004, the Germans had left; the Russians departed the next month. When The Washington Post’s Rajiv Chandrasekaran visited the plant, he found graffiti in the turbine room: “Long Live the Resistance”. The Resistance has lived a long life. It has also metamorphosed into a deadly nightmare. A decade later, Iraq remains in chaos. Al-Dohra was repaired in 2008, with the German firm Siemens putting in new boilers. But Iraqi society was not repaired. It remains a wreck. Cockburn sees the emergence of the I.S. in the collapse of Iraqi society in the 1990s and of the Iraqi state in the 2000s. To rebuild both would require a great effort. But it is the only way to actually fight the I.S.