With deep brown eyes and a beguiling smile, Gul Khan looks just like others boys of his age.

No-one would ever think that a few months ago this 18-year-old was arrested wearing a suicide vest, hours before he was to blow himself up at Kohat University in north-west Pakistan. 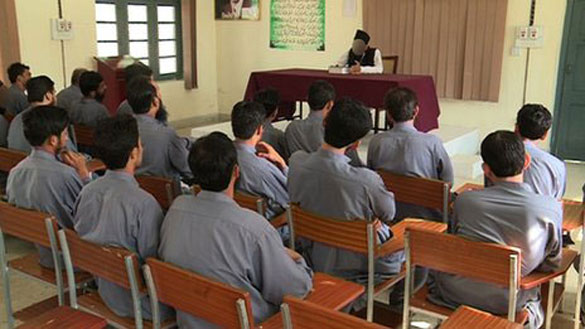 Gul was at school in Kohat, a city in Khyber Pakhtunkhwa province. During the summer holidays, he would visit his ancestral village in a tribal area near the border between Pakistan and Afghanistan.

It was in that volatile territory that one of his cousins connected him to the militants and he was recruited for training.

"They [the militants] used to give us lectures [saying that] according to Sharia [Islamic law] it is obligatory to pursue jihad [holy war] against the government now. I lost my mind and started believing them. They lectured me for three months," says Gul Khan.

He tells me his story from a centre established by Pakistan's army in the town of Tank, close to the border with Afghanistan, for the rehabilitation of young men who supported and sympathised with militants.

One of three such units in Pakistan, the centre is protected by tight security. But inside there are classrooms for vocational training, a basketball court, a TV room and a mosque.

Gul Khan underwent militant training with around 12 others at a camp in the Orakzai tribal region. His parents were completely unaware of this radicalisation until his last trip to Kohat.

Then security agencies raided his house and arrested him with a suicide jacket.

"They [the militants] said girls are getting education in the university and that is against the teachings of Islam. If girls study, they will become empowered and destroy our religious centres, so I thought if I blew up the university I would go to Jannah [paradise]."

Suicide bombers have proven to be the deadliest weapon used by the Pakistani Taliban against civilians and the country's security forces. Pakistan has seen about 350 such attacks since 2002.

Along with Gul Khan, there are 31 other young men on the army-run programme. They were recruited in the name of religion - and jihad - from outside schools, mosques and colleges, persuaded by Taliban arguments about US interventions in Afghanistan and Iraq and drone attacks on the borders of their own country.

They were later arrested across different parts of north-west Pakistan.

Mubarak Ali had thrown grenades at a police van. He said he had been recruited by a mysterious man lingering outside his college.

"He had long hair, and he used to play religious songs on his mobile phone loudly. Every day I used to see him at my college gate talking to boys, making friendships with them. I also became his friend.

"Then he started walking with me after my classes. We had long discussions about Islam and the US invasion of Iraq and Afghanistan. He changed my mind," says Mubarak Ali.

"He knew how to convince others, how to change minds, I started believing him. He used to talk about Jannah, that I would go to Jannah if I did jihad."

In the centre, would-be suicide bombers Mubarak Ali and others are getting psychiatric help. And to counter such radical ideas, the centre also has moderate clerics.

Gul Khan says: "Now I thank God that I was unable to detonate my jacket. I have been told that suicide is forbidden in Islam."

Military commander Brigadier Warriach, who runs the centre, told me: "Security agencies uncover terror plots on routine basis, and we arrest many people. But not all of them are brought here.

"We judge people, try to analyse their aptitude. Those selected for the programme are the ones who regret and have a desire to reform." 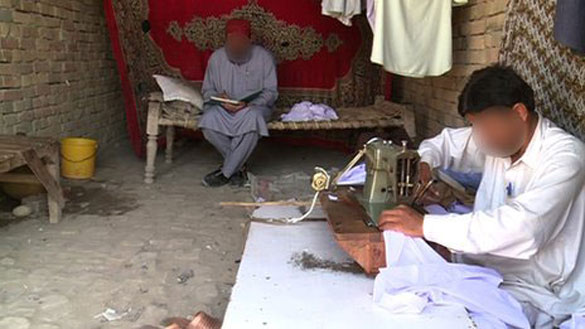 Rahimullah is now running a successful business in Tank

Officials say that during interrogation, it becomes clear that some young men simply fell into the hands of the militants and are willing to change their outlook.

This includes attitudes to women. I asked Gul Khan about his sister. He says that she was educated and even admitted to study at a college. And when I asked him why he was going to kill girls studying at university, he says that he completely lost his mind and he now knows how wrong he was.

Rahimullah was in the first batch to go through the army's centre. He is now running a successful business in Tank.

"I learned stitching at the centre, and then opened a tailoring shop here. Now I have expanded my business. I have hired a helper for the shop and do property business as well. I get pretty good money every month," says Rahimullah.

He is very keen to ensure his children do not get exploited in the way he did.

So far 71 young men in two batches have passed through the centre and been returned to their communities. It is probably too soon to judge whether the initiative has been a success but the army says it keeps an eye on the young men.

They graduate with practical training to help them become electricians, masons and plumbers, along with a tool-kit and some cash.

Gul Khan has ambitions for his new life. "In my native village there are no schools, hospitals or electricity. People have lost their minds, they feel the government had done nothing for them, so they fall prey to militants and their ideas.

"I will try to talk to young men of my village: they should leave the path of violence, and take care of their families and their own lives instead."

Names have been changed to protect the identities of the men attending the programme.