After the Surrender of 1971, Pakistan Chose a Low Cost Option of Proxy War - Using Terrorism as a State Policy against India

Forty-nine years ago, in 1971, India imposed a crushing defeat on Pakistan — the country was split into two. Pakistan Army surrendered with 93,000 soldiers, which was the biggest ever surrender after World War II. Smarting with this humiliation, and earlier experiences of 1947 and 1965, Pakistan realised that it could not match up to India in conventional terms. Therefore, in the eighties, they adopted a different strategy — of bleeding India by a thousand cuts — based on a proxy war, using terrorism as a State policy to wear out our security forces and impose a heavy cost on India. 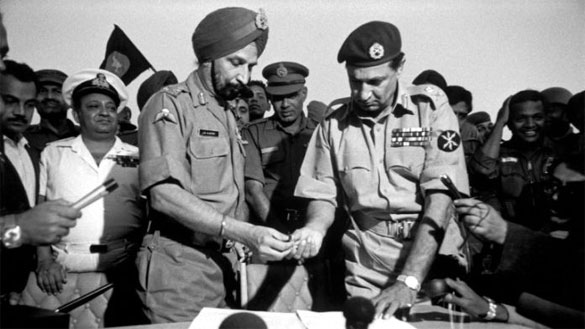 Lt. Gen. Jagjit Singh Aurora (L) who played a significant role in India's victory in the 1971 war with Bangladesh | Twitter/@ashokgehlot51

Pakistan began supporting militancy in Punjab, all the while fostering religious and fundamentalist links with the Kashmir Valley. Pakistan had surplus ‘jihadi’ fighters, as their mission in Afghanistan was over after the Soviet withdrawal.  They also recruited and supported disgruntled youth from the Valley. Pakistan encouraged fissiparous forces in India by offering physical, moral, ideological, diplomatic and financial support to terrorism — a low cost option.

Pushing terrorists across the border or Line of Control (LoC) to perpetrate violence in India ties up a disproportionately large number of Indian troops, and has the added advantage of playing the deniability card. They actively disown the terrorists. During the Kargil War, Pakistan even disowned its regular army soldiers and refused to accept their bodies, in a bid to show that the intrusion was the handiwork of irregulars.

India obviously did no such thing. Hence, we suffered the consequences. We could only take defensive measures. And this emboldened the adversary to become more adventurous. The Mumbai bombings of 1993, Parliament attack of 2001 and 26/11 Mumbai attacks are scars hard to forget. And yet our response was less than strong. In domestic discourse, and even beyond borders, India was labelled as a soft State.

The deep State of Pakistan continued reinventing the terror tactics. Palestine intifada taught them that stone pelting is more acceptable in the Western world, which sees it as a form of unarmed protest. Eventually, stone pelting was used adroitly as a force multiplier while encounters with terrorists were in progress in Jammu and Kashmir. In 2015, we began to witness use of social media by terrorists and separatists to create anti-India narratives for radicalisation and mobilisation of mobs for stone pelting and more.

In 2016, there was a spate of high-profile terror attacks – Pathankot Airbase attack, and terrorists taking over 60 hostages at a six-storey building in Pampore. Uri attack in September 2016, in which we lost our 18 soldiers, was the last straw.

India decided to take the bold step of hitting at terrorist camps across the LoC in Pakistan-occupied Kashmir (PoK). An even bolder step was taking the ownership of the surgical strike, in sharp contrast with the deniability card that Pakistan employs after pushing in terrorists across the LoC. This was India’s announcement to Pakistan, and to the world, that we carried out these raids in response to the terror attacks on our country, most notably Uri.

Uri brought a paradigm shift in our modus operandi in dealing with cross-border terrorism. A little over two years later, when we lost 40 CRPF men in Pulwama, true to its recently stated stand, India launched precision air strikes at a terrorist camp in Balakot, deep into Pakistani territory, beyond PoK. It was a bold attack on a pinpoint target, and once again we took ownership. India also articulated the doctrine of pre-emption — in case there is credible evidence of preparations being made to target India, we reserve the right to launch a pre-emptive strike.

India has drawn new red lines, shed the soft State tag and started using State power as a legitimate instrument for the protection of the State and furthering its objectives. But, are such strikes enough by themselves? Are we drawing wrong lessons from them?

Such strikes, whether pre-emptive or retaliatory, are not as simple as they seem. In addition to operational risks at the national level, the country has to be prepared for any response at an escalatory ladder, from a skirmish to a localised to a full-scale war. Therefore, while a bold response is a good shift to tackle the terror paradigm, our armed forces also need to be muscular and well prepared for retaliation at conventional levels.

For over a decade, India’s military modernisation has been on the back burner for many reasons. Armed forces have to be modernised and strengthened in conventional terms, not so much to prosecute war, but more to avert one — by deterring the enemy.

In the last couple of years, some serious steps have been taken on defence modernisation, and it paradoxically got an impetus due to the stand-off between India and China in Ladakh, which amply demonstrates the need to have a muscular capability, if we are to adopt a bold security policy successfully.

Lieutenant General (retd) Satish Dua @TheSatishDua was Corps Commander in Kashmir and retired as the Chief of Integrated Defence Staff. Views are personal.