ISIS Riding on Covid-19 Situation to Strengthen Base in Philippines

After being routed from Iraq and Syria, the ISIS is trying to build base in the South Asian countries including Philippines where Muslims form a sizeable population. While Al Qaida's catchword was 'Down with America', the ISIS's catchword is Caliphate. The terrorist outfit exploited the longing of the Muslims for the re-establishment of the Caliphate as the general Muslim belief was, and still is, that a Caliphate will solve all their problems. But gradually the Muslims realised that it had nothing to do with Caliphate but was pursuing its own sectarian and extremist agenda.

Philippines Special Forces Are on Hunt For ISIS

In Syria and Iraq, it had hijacked the Arab Spring which was only a protest of the people against corruption, government apathy towards people and anti-people policies of the governments. People only wanted a change in the governance. They did not want Caliphate. But the ISIS hijacked the popular movement and turned it into a sectarian war and lost the popular support. It resulted in their rout five years later.

However, they were down but not out. They tried to build base in other Muslim majority countries like Bangladesh, Pakistan, Afghanistan and also in India, Sweden and Philippines where Muslim population is sizeable. In these countries, they have tried to adopt the same modus operandi: First penetrate into the popular movements and then hijack it and turn it into a war for 'caliphate'. This had worked in Syria and so they hope that this will work elsewhere as well.

In India, they have established there so-called wilayah in Kashmir because some political and semi-political organisations have been fighting for 'independence'. There were countrywide protests against the NRC in which Muslims took the leading role. There are other religious and social issues of the Muslims. Therefore, the ISIS adopted the same strategy to hijack the protests in Kashmir and in the rest of the country. For that purpose, it has also launched an online propaganda magazine 'Voice of Hind'. However, in India their modus operandi has failed so far thanks to the fact that the majority of Muslims of India have faith in democratic values. In Afghanistan, they are trying to make a foothold but are overshadowed by the Taliban as the more powerful claimant to Caliphate. 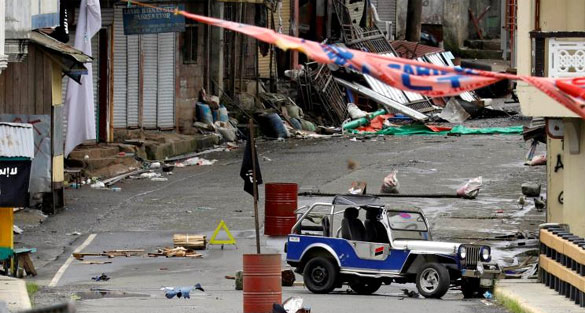 A view of the Maute group stronghold with an ISIS flag in Marawi City in southern Philippines.

Therefore, the ISIS have turned their focus on Philippines, a Christian majority country where Muslims form 6-10 per cent of the population and they form 98 percent of population in Mindanao region in the south.

The indigenous Muslim population of Philippines have been demanding a Muslim state within the state in the same way Muhammad Iqbal had proposed a confederation of Muslim states within India where Muslims will have their Sharia Law.

The movement had started in the 70s due to various injustices done to the minority Muslims and due to the Homestead Programme of the Philippines government under which the Christian majority community was acquiring lands in Mindanao creating among the Muslim a fear of displacement and losing their land. Militant organisations like Abu Sayyaf, Moro National Liberation Front and Moro Islamic Liberation Front, Maute group and some other small secessionist groups came into existence. (Moro means Muslim). Among them MNLF fought for the rights of the Muslims and for an autonomous region for Muslims but did not seek the support of terrorist organisations like Al Qaida or ISIS. Abu Sayyaf group had Wahhabi affiliations and had been involved in criminal activities like rape, abduction, drug trafficking, extortion, attack on the army, bombings etc under the pretext of fighting for Independence. 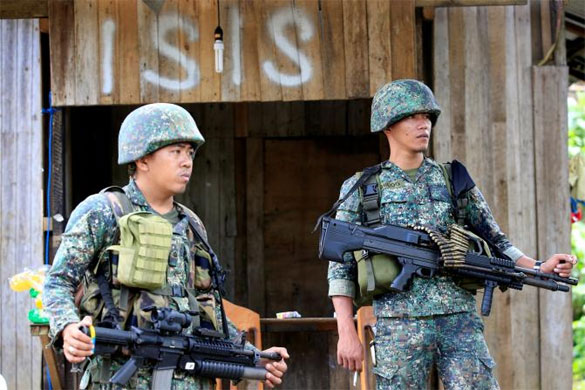 Soldiers stand guard along the main street of Mapandi village as government troops continue their assault on insurgents from the Maute group, who have taken over large parts of Marawi City, Philippines.

There were many ups and downs in the movement for autonomy during the next ten years.

In 2018, the Bill was signed into law. In 2019, a two part legally binding plebiscite was held through which some more areas and municipalities were added to the territory of Bangsamoro.

In 2022, the new elected government of Bangsamoro is supposed to be formed and a Muslim state within Philippines will become a reality. The territory will be a devolved regional parliamentary government within a unitary presidential constitutional republic.

The historical background of the movement for the creation of an autonomous Muslim state was given to show how the ISIS is trying to hijack the movement to establish a Caliphate in the recently created Muslim state of Mindanao and has caused huge loss and damage to the Muslims of the state.

The ISIS emerged in 2014 and in the same year the peace agreement between the Philippines government and the MILF was signed creating Bangsamoro. So the ISIS saw in this development a good opportunity to establish its Khilafat in Philippines. It pushed its fighters in Mindanao where they conducted terrorist activities. Abu Sayyaf group leader Anilon Hapilon, Maute group and other small militant groups pledged allegiance to the ISIS leader Abu Bakr Al Baghdadi. Hapilon was appointed the leaderof ISIS in Philippines. The ISIS announced that those who could not travel to Syria to join their 'jihad' could go to Philippines. Subsequently, militants from Malaysia, Indonesia, Saudi Arabia, Yemen, Somalia and Chechnya reached Philippines by 2016 and intensified their terrorist activities. The ISIS has declared Mindanao as its East Asia province or wilayah. During the last four years, the ISIS and its affiliates have conducted a series of bombings and suicide attacks in Muslim majority Mindanao and other parts of Philippines. In July 2018, the ISIS conducted a suicide bombing in Basilon in which 11 people were killed. The suicide bomber was a Grrman-Moroccon. On 31 December 2018, they carried out a bomb blast in a mall. In January 2019, they conducted bombing at the only Cathedral Church in Jolo and destroyed it. 24 people died in the bombing.

The Battle between the ISIS and its allies and the Philippines military aided by the US started on May 22, 2017 and continued for five months in which 1200 people including civilians died and 35, 000 were displaced. Many leaders and commanders of ISIS and Abu Sayyaf group were killed. The leader of ISIS in Philippines Anilon Hapilon was among the killed. After five months of battle, the city of Marawi was evacuated from the terrorists. But the city was totally ravaged. Many are living in camps. They have lost their livelihood, their houses and their loved ones. One lady Fathma lost four of her 8 sons in the Battle. The terrorists took them to use as human shields.

Despite the joint US-Philippines offensive against the ISIS and its allies, the group continues its terrorist activities and continues to recruit Muslim youth. It has attracted even University graduates into its fold through their ideological campaign. The hardline preachers who have been educated in madrasas in Yemen and Saudi Arabia promote extremism among the youth. Many of them have fought in Afghanistan against Russia. Jama'ah Islamiah trained the recruits in the jungles of Philippines.

During the Covid-19 pandemic, the ISIS tried to exploit the restrictions to garner support of the Muslims. They threatened to conduct more strikes if the mosques were not reopened. They also threatened Muslims that if anyone followed lockdown rules would be punished. The ISIS has regrouped under its new leader Hatib Hajan Swadjaan. About 300-500 ISIS-Abu Sayyaf fighters are still believed to be active in the Mindanao region. Because of the fighting, the region has suffered economically, socially and politically.

At a time when the Muslims should have worked for their economic, political and social development under the new political set up of Bangsamoro, the ISIS has caused the Muslims of Mindanao huge damage by starting a battle against them in the name of establishing Caliphate. First, they destroyed Iraq and Syria. Now they are destroying the Muslim community of Philippines.