The Jihadis Are Back

When the Indian Army’s 20 Kumaon Regiment vacated its outpost at Shala Bathu on 23 September to pave the way for the takeover by 3/3 Gorkha Rifles, little did they know that dozens of militants were waiting to mount the biggest incursion attempt across the Line of Control (LoC) since the 1999 Kargil War. The militants were quick to capture the outpost in the Keran sector and dig trenches to consolidate their position, in the process occupying an area spanning 5 sq km. And they managed all this without the help of covering fire from the Pakistan Army’s two posts located at Kismat and Saheli. 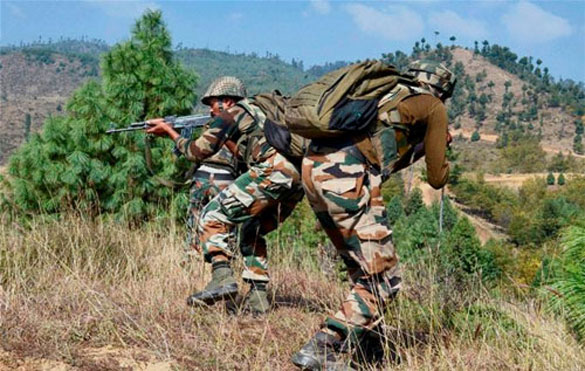 It took the Indian Army a fortnight to regain the territory. Army sources claim that seven militants were killed and the rest were forced to return to Pakistan. But by staging the “deliberate” incursion and engaging the army for as long as they did, the militants may have already fulfilled their basic objective: to give the clearest signal that the Kashmir Valley is in for a fresh cycle of deadly jihad.

In a recent interview to a Pakistan daily, Hizb ul Mujahideen supremo Syed Salahuddin had conveyed this much. “We don’t operate in cities and towns. We attack border posts, supply lines and cantonments,” he had said.

On 8 October, General Officer Commanding-in-Chief, Northern Command, Lt Gen Sanjiv Chachra declared the operation over. He denied that the militants had occupied any territory, but admitted that 30-40 militants had made “multiple point bids” to enter India but had been repulsed. “There were 30-40 militants who had come in. They were foiled, some of them have fallen,” he said.

The army also released pictures of the militants killed in the operation besides the seized cache of arms and ammunition — 59 weapons, including 18 AK-47 rifles.

So did any militant manage to cross over? While the army has denied the possibility, police sources say that some infiltration is likely to have taken place. “There are reports of some militant movement in Kupwara district following the Keran stand-off,” reveals a police officer. One such newly infiltrated militant injured six policemen in Srinagar’s Ahmad Nagar locality on 3 October following a nightlong encounter after which he escaped.

The Keran incursion has followed a succession of border attacks this year, most of them concentrated in Jammu. The incident came alongside consecutive attacks on a police station and an army camp in Kathua and Samba, respectively, in which 12 people, including eight security personnel, were killed. Even otherwise, the firing along the border has raged intermittently through the year, coming to a head in mid-August when the exchanges spanned a large stretch of the LoC, extending for the first time to Kargil and Drass after the 1999 Kargil War.

The border forays have been complemented by the strikes within the Valley, the most sensational of them in Srinagar. In March, Fidayeen stormed a CRPF detachment at Bemina, killing five security personnel. On the eve of Prime Minister Manmohan Singh’s visit to the state in June, militants killed eight soldiers and left 14 wounded in Hyderpora. Since then, three more soldiers have succumbed to their injuries, taking the toll to 11. This makes the Srinagar attack the deadliest this year, surpassing the attacks at Kathua and Samba.

But the latest incursion has raised the security threshold. Across the Valley, security detachments are being re-fortified to deter possible fidayeen strikes. Intelligence reports talk about the sighting of “increased militant movement” in Kupwara where infiltration-prone sectors such as Keran, Karnah and Machil are located.

Security experts say that the militant strategy was two-pronged: One, to keep the border active as doing so draws international attention and raises tension between India and Pakistan with the attendant media fallout. Second, to launch high-profile strikes within the state at the time and place that increases their impact manifold. One major advantage of this strategy is that this can be executed by a less number of professionally-trained militants, who create a perception of violence disproportionate to their number on the ground. The police believe that the number of active militants is less than 150 whereas the army pegs the figure at 300.

“This is al Qaeda-style militancy. It is the quality of the attacks that matters, not the number on the ground,” says a police officer on the condition of anonymity. “Al Qaeda has overturned the traditional concept of jihad. Less number of militants means less detection by security agencies and lesser militant deaths.”

Militancy in Kashmir has undergone a “cultural shift”. It is not common to find bearded militants with a headdress or Afghan cap with checked scarves thrown around their necks or flung over their head. Now militants are mostly clean shaven and wear trendy dresses to avoid detection.

However, what remains unclear is the connection between the resurging jihad and Pakistan. Initially, the army was reluctant to blame Pakistan with Srinagar-based Corps commander Lt Gen Gurmit Singh even saying that there has been no “significant ceasefire violation” by Pakistan in the area in recent weeks. However, army chief Gen Bikram Singh later directly charged Islamabad of backing the infiltration. “It is impossible for the terrorists to do any activity along the LoC without the Pakistan Army’s knowledge,” he said.

On the other hand, the argument in Pakistan is that being bogged down in its own mess and still engaged with the ongoing US war in Afghanistan, the country can ill-afford to open another front with India. But the militants have left nobody in doubt about the revival of jihad in Kashmir following the US exit from Afghanistan. This is, at least, what Hurriyat Chairman Mirwaiz Umar Farooq has let on after his visit to Pakistan late last year, where Jamaat-ud-Dawa chief Hafiz Saeed reportedly told about “the wait for 2014 to re-launch jihad in Kashmir”.

“Pakistan can still be part of the renewed Kashmir jihad. It is difficult to separate the country from the effort. But militants have also developed the capacity to act autonomously of the Pakistan government,” says a police officer. “If jihadis can take on the Pakistani State, they can also pursue their favourite cause in Kashmir.”

Ironically, this breakdown of the control over the militants may have been the offshoot of the Pakistani effort to halt their inflow into Kashmir in the early part of the past decade. According to Fayaz Ahmad (name changed), a surrendered militant, when former Gen Pervez Musharraf closed down militant camps in PoK in 2003 following his assurance to New Delhi that Pakistani soil will not be used for terrorist activity against India, all the training militants were told to return to their homes.

“There was no rehabilitation policy. Militants were told to rebuild their lives on their own,” says Ahmad, who was also training in one of the camps at the time. “Left to fend for themselves, the militants developed their own independent links with Lashkar-e-Toiba, Jaish-e-Mohammad… some even joined the al Qaeda. The Pakistan government had no control over the militants.”

It is these militants who, feeling empowered by the imminent US exit from Afghanistan — which they are inclined to see as Uncle Sam’s defeat — may be heading back to Kashmir to pick up the threads of an unfinished jihad. And as Ahmad would like to believe, they are capable of doing this “with or without Pakistan’s help”.