Self-Made Radicals: Living and Loathing among ‘Unbelievers’: Organisations That Teach Self - Segregation And Alienation From The West Prepare The Ground For Jihad

By Ravi Kalia and Tahmina Rashid 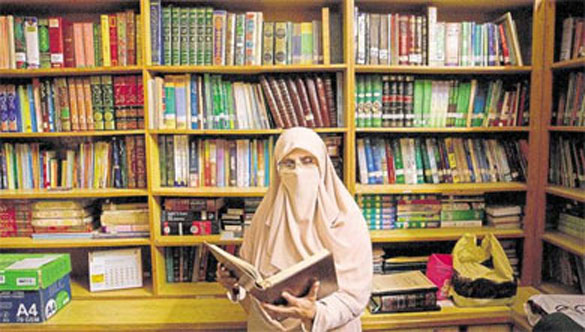 Although Al-Huda is neither recruiting for nor supporting the Islamic State (IS), its curriculum is fully aligned with the IS’ propaganda. (AP Photo)

Syed Rizwan Farook and Tashfeen Malik, the San Bernardino shooters, are poster children for self-radicalised Muslims that are on the rise: Muslims no longer need mosques, imams or Islamic centres to radicalise them, as this transformation increasingly happens in the privacy of their homes, using smart-phones, tablets, and computers; and social media links the radicalised with terror organisations and criminals.

Imams in the West may not be preaching violence to the faithful or urging them to engage in terrorism, but they are teaching orthodox Islam and Islamic etiquette of living a Muslim life in the West. Al-Huda, where Tashfeen studied, is one of hundreds of such organisations, whose message can easily escape scrutiny — yet Al-Huda is a nursery for promoting the ‘Otherness’. Young Muslims are told that they may be living in the West but that they are different; their identity is the only Muslim identity, and nothing else matters.

Farhat Hashmi, the Al-Huda founder, received training from the Islamist Maududi’s Jama’at-e-Islami party in Pakistan. She opened Al-Huda in Pakistan in 1994 with her husband, Idrees Zubair. She migrated to Canada with the help of Mubeen Qureshi, a retired judge in Mississauga, and the Islamic Circle of North America (ISNA) and opened a branch there in 2004. Her Salafi teachings are aligned with Wahhabism, a puritanical form of Islam. Al-Huda has become a multinational and multi-million dollar establishment. Recently, four female Canadian teenagers were stopped from joining the Islamic State (IS): All of them had attended Al-Huda institute in Mississauga.

Al-Huda has officially distanced itself from Tashfeen Malik, claiming that it ‘denounces extremism’. Al-Huda and similar outfits teach self-segregation and alienation from the West, and consider Western values un-Islamic, inferior and contradictory to Islam. The acquired feelings of alienation from the wider Western society, reinforced by the responsibility of a Muslim living in the West to practice a certain form of Islam only needs a trigger to cross the line and turn these feelings into hatred leading to violence. No one needs to be trained by these organisations to be a terrorist; all it needs is the sense of ‘Otherness’: Righteous, better, superior, oppressed, and a good Muslim serving God through self-segregation from people of other faiths. The fragility of the faith is preached with such precision that each small act of daily living has to subscribe to the prescribed method.

Although Al-Huda is neither recruiting for nor supporting the IS, its curriculum is fully aligned with the IS’ propaganda. Both propagate the subordination of women; define their role and appearance in the public space, demanding Niqab. Their messages highlight the role of women as wives, as mothers, and as procreators who should accept polygamy as divine law. Both claim to have liberated women: One through self-proclaimed feminist interpretation of Quran, hence empowering women in that space which in their view is male dominated, especially in the Asian communities; the other through liberating women from the materialist West by pushing them in the private space to procreate and continue to supply the next stream of Jihadi martyrs.

Both have global agendas: One preaching Muslims how to be good Muslims while living in the West, and the other by reminding women of their duties towards god, achieved through complete social segregation in Western societies. Both see the economic necessity of Muslim men to live in the West — but see no contradiction in benefitting from the ‘idolatrous’ capitalist economies as long as it serves their purpose. Western societies are labelled as immoral, and democracies are viewed as evil — however, migrating to the ‘immoral’ West or living there is perfectly acceptable, provided you order your life according to Islamic teachings. Using Western technology, electronic gadgets, and weapons are acceptable; but integrating in the Western societies is not acceptable. In sum, Al-Huda and other such organisations help resolve the contradictions between orthodox Islamic teachings and liberal Western values by promoting self-segregation. Al-Huda and the IS both use the Internet to disseminate their teachings, and they tweet their message to wider audiences as service to the faith.

While traditional clergy rejects Hashmi’s message and many Muslims shun her, Al-Huda has had stunning success among elite Muslim women — at home and abroad — by providing them a space to engage with the religious texts in a way they never experienced before through new interpretations, empowering and assuring them that they have an important role to play — not only procreating but also preparing good Muslims and that they will be rewarded in the afterlife. The focus remains on afterlife, not on this life, which is considered transitional.

When the IS calls upon Muslim men and women to commit jihad in the West, one should not be surprised if average Muslims respond to these calls. Outfits like Al-Huda as nurseries for self-seclusion have done the groundwork already.

Ravi Kalia is professor of South Asian History at the City College of New York; Tahmina Rashid is associate professor in International Studies at the University of Canberra