Pakistan's Summer Killings of 2012 and the Murderous Mobs

IN the 1700s, the French were hungry. Not the wealthy, who were happily ensconced in the gilded halls of Versailles; but the poor who still relied on the vagaries of crops and weather to fill their stomachs. 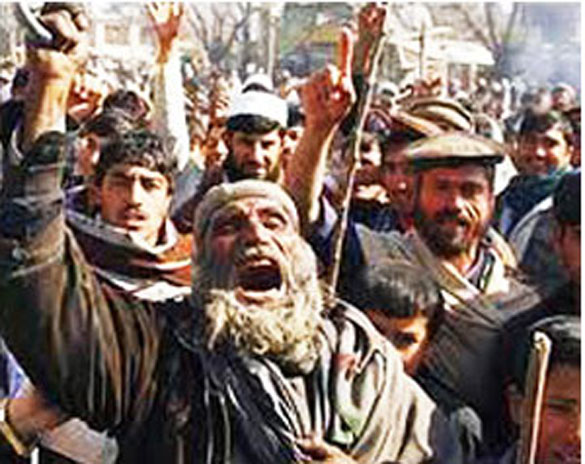 A Malang (Mentally challenged men, generally found on the Durgahs of Sunfi saints)

In 1788, many political agendas festered in the galleys and gauntlets of the France, but those eking out an existence in the alleys of Paris or on the hardscrabble farms of the surrounding countryside knew only their hunger, the fact that there was no bread.

The drought, caused by harsh, inexplicably cold winters and deadened crops, went on year after year. By 1789, the price of bread had risen so sharply that few could purchase it at all.

By the September of 1792, the drought had matured into a monster and hunger and hopelessness had coagulated into a mass movement. On Sept 2, 1792, 24 priests being taken to a prison in Paris were attacked. The mob overtook the guards transporting the prisoners and tore their bodies apart.

The killings continued the next day, and the day after that, all orchestrated by mobs who had heard a rumour that the Prussians were about to invade and that they would be assisted by priests who opposed the revolution.

When they stormed the prisons they did not just kill the priests, they killed everyone else as well. In a few days that bloody September, about 1,200 prisoners in various jails around Paris had been killed. At a prison named Bicêtre, 43 of the 162 prisoners killed were under 18.

The September massacres of 1792 were only one in the many grisly episodes during the denouement of the French revolution but it was notable because of its vivid illustration of the capacity of an angry crowd to kill.

The poor who killed often other poor had indeed been wronged, ignored by an apathetic and decadent elite, by institutions that seemed distant and untouched by their hunger, and even by nature itself unwilling to water the crops they could make into bread.

Those who killed in the streets of France did so with a fury that terrified, most unknowing that their actions would one day be documented as the episodes of a revolution, along with public beheadings and limitless looting.

The summer in Pakistan this year has been as hot as any other, its furious temperatures magnified by deadened fans and unlit stoves. At the start, some three months ago, the Tehrik-i-Taliban Pakistan attacked a prison in Bannu and freed all the prisoners before the gaping guards. At its height, some two weeks ago, they captured 17 soldiers, and beheaded them, filming the carnage for greater crowds than can fit in a public square.

Earlier this month, the acts of rebellion of a group graduated to the randomness of the mob. A man, otherwise unknown, was accused of blasphemy and taken to a local police station. Before there could be an investigation, a hearing or a conviction, a crowd of a thousand men gathered outside the station demanding that the accused be handed over to them.

The police could not contain them or calm them and soon they dragged the man outside. There, they beat him to death. Finally, they poured petrol on his body and burnt it.

The act of the crowd in Bahawalpur is not an anomaly. Some two weeks earlier, a crowd in Kuchlak, about 10 km north of Quetta, attacked a police station. They too, demanded that an accused be handed over to them. The accused, a mentally challenged man, was alleged to have committed blasphemous acts.

In the scuffle between police and the crowd, several cars were burned. Many people received gunshot wounds and two children were killed.

About the same time, an official with the Karachi Development Authority barely escaped the revenge of the mob. Police acting at the behest of a crowd gathered at the police station arrived at his house and told him he had been accused of blasphemy. He was lucky to be only arrested, the crowd having dispersed before they could destroy.

Pulling common threads is the task of historians; and for Pakistanis these actions of collective anger are facts of contemporary life that cannot yet be cohered into a story. At the same time, these moves by the mob are in their heightening frequency and senselessness representative of an outrage that may be about blasphemy but is certainly about rage and exclusion.

If the TTP intentionally refuse to believe in the ability of the democratic system to govern, the crowds of accusers, now newly born killers, seem to be the same thing. When crowds start to kill, the question ceases to be about right or wrong. It is simply about the power to kill — or be killed.

The project is the retaking of all that is lost or that never was and all that no one seems interested in returning unless it is grabbed. The system exists but they are not a part of it. And there are now enough of them to take its failing bits and tear them to pieces, killing whatever is attached to them.

Pakistan may or may not be at the foot of a revolution, or perhaps just tainted with enough greed and corruption and chaos crowned by the threat of foreign invasion, to make an accusation a conviction and a crowd the executioner.

The chronicles of the French revolution — the intersection of natural catastrophe and elite disconnectedness, the exclusion of hundreds and then thousands whose hunger was insignificant to those who ruled them and the senselessness of insatiable violence — present many of the flavours of contemporary Pakistan.

There was indeed a time, perhaps a decade or two ago, before floods and earthquakes and drones and power riots where the favoured clichés seemed pertinent. But in the story of Pakistan that will be penned in the future these summer killings of 2012 may be noted as the moment when the once moderate became simply the murderous majority.