The Salafists, Funded and Backed by Saudi Arabia Behind the Violence in Sweden 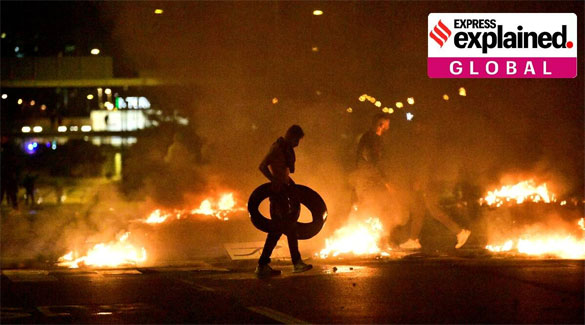 Demonstrators burn tyres during a riot in the Rosengard neighbourhood of Malmo, Sweden August 28, 2020. (TT News Agency via Reuters)

The violent protests by immigrant Muslim population in the city of Malmo in Sweden last Friday cannot be justified and supported even if it was in retaliation to the burning of the holy Quran by the members of Stram Krus, a right-wing political Party that has been campaigning against immigrant Muslims in the country. The police had barred Rasmus Paludan, the leader of Stram Krus from entering Malmo but the members of his party burned a copy of the Quran.

Enraged Muslims burned vehicles and vandalised public property. Muslims should have protested peacefully as the Quran preaches restraint and patience at provocations. Unleashing violence has given more leverage to the political opponents of Muslims in the country and abroad who have been linking rising crimes and unemployment in Sweden with the increase of Muslim immigration in Sweden.

This is not the first time Muslim community of Sweden has resorted to violence. In 2008, they had turned violent when the landlord had refused to renew the tenancy of the premises on which a mosque was located. The Muslim youth had occupied the premises for three weeks and clashed with the police until a compromise was reached.

Earlier in 2010, a youth named Taimour bin Abdal Wahhab affiliated to Al Qaida had conducted a suicide attack in Stockholm. In 2016, a fire had broken out in an Islamic community centre in Malmo and the IS had claimed the responsibility for it. All this hints at a violent collective attitude of the immigrant Muslim community of Sweden.

Majority of the immigrant Muslims are from Somalia, Iraq, Syria and Bosnia. Within the last six years Sweden has liberally given asylum to almost 300, 000 refugees from Iraq, Syria, Afghanistan and Iran. Saudi Arabia has funded the construction of some mosques in Sweden. There had also been rising number of Salafists in the country. All these factors are behind the growing extremism among the Muslim population in Sweden. 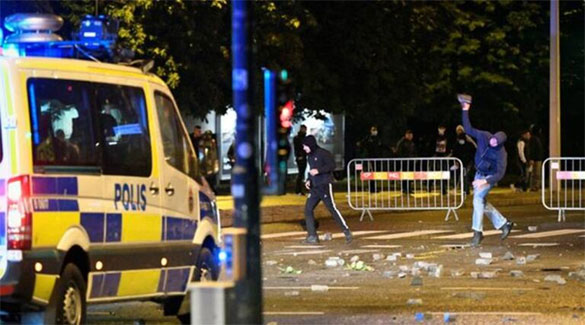 Demonstrators throw stones at police during a riot in the Rosengard neighbourhood of Malmo, Sweden August 28, 2020. (Photo via Reuters)

The problem had been aggravated due to the ghettoisation of immigrant Muslim community. A few years ago, a political party of Sweden had expelled a Muslim leader who had circulated a pamphlet in Arabic that campaigned for the supremacy of Islam over the Swedish culture. It is obvious, then, that the Saudi Arabia and the Salafists have been promoting extremism in the name of Islam and inculcating among the Muslim youth of the country a violent religious outlook.

This will only create new problems for them as the Swedish government has made Immigration rules harder as the asylum seekers now have to wait longer before being granted asylum. The Salafists in Sweden funded and backed by Saudi Arabia will only harm the Muslim community with their radical ideology and extremist and violent religious outlook.