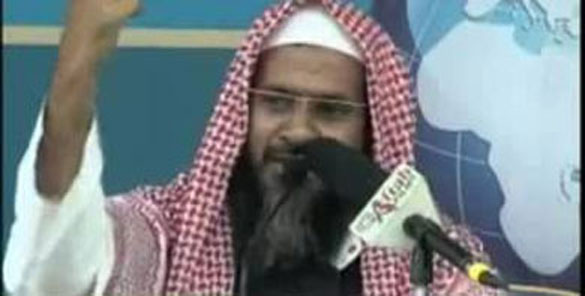 Mufti Abdus Sami Qasmi a Deobandi cleric was recently arrested presumably for backing ISIS and instigating Muslim youth in his various speeches. After his arrest, his supporters have claimed that he has not supported ISIS. It is important for the Muslim community and the nation at large to settle the question if he really supported ISIS and provoked Muslims in his speeches, or is it just a police conspiracy, as claimed by his supporters. To settle the issue, NewAgeIslam.com is producing some of his statements taken from the speeches available at youtube.com with their English translation.

“To those who say how the person who was in the prison has become Khalifa today? Our history tells us that Hazrat Yusuf (peace be upon him) was in a prison in Egypt. But after coming out of prison, he sat on the throne of kingdom and became ‘Amir ul Muslemeen (leader of Muslims) and Khalifat ul Muslemeen (Caliph of Muslims). Similarly, having come out of the prison called “Abu Gharaib”, Ibrahim bin Awwad (i.e. Abu Bakar Al-Baghdadi, the leader of ISIS), who is from the progeny of Hussain, has sat on the throne of the King. This position is not from you. It is the declaration from Allah Almighty who says: “Say, "O Allah, Owner of Sovereignty, You give sovereignty to whom You will and You take sovereignty away from whom You will”. (3:26)

“Those who call themselves Muslims must stop saying that everything in the world is in the hands of America, and that it created Osama bin Laden and then killed him. This is what the (Urdu) newspapers say, don’t they? This is what the (Muslim) Media says that America created Osama and then killed him. Tell me, if death is in the hands of America! Not at all! No person has any authority over it. Everything is up to Allah Almighty. Their death was destined to take place in 2002, 2011 and 2 May 2011 in Abbotabad, so they died as martyrs. Similarly, in 1931, Sayyid Ahmed Shaheed and Shah Ismael Dehlavi were destined to get the rank of martyrdom in Balakot. In 1857 Maulana Qasim Nanautvi did not suffer martyrdom, because Dar ul Ulum Deoband was destined to be founded by Mualana Nanautvi, so he was kept alive for that purpose….”

In the same speech (55:45 to 1:49:26), Mufti Abdus Sami openly supports and praises the four founding leaders of ISIS—Abu Hamza Muhajir, Abu Mus’ab Zarqawi and Abu Umar Al-Baghdadi, and Abu Bakr Al-baghdadi. He also instigates Muslims to weep for and sympathize with ‘the martyrs’ of ISIS, Boko Haram in Nigeria and Taliban in Afghanistan.

“Those people who have come back after visiting Afghanistan have told us that they have revived the memory of the Sahaba (the companions of the prophet peace be upon him) and restored Khilafat-e-Rashida (the rightly guided caliphate). When they were arrested, the clerics were imprisoned in Guantanamo, their beard and moustache had been shaved. After thirteen or eleven years, Allah Almighty changed the situation so much so that the same scene is being repeated in the lands of Iraq, Syria, and Libya. Those who used to handcuff others have been shackled now. Those who would imprison [others, Muslims] have been imprisoned now. Those who used to put orange clothes on [Muslim prisoners] have been dressed up in orange now. Those who used to kneel [others] have been made to kneel on the ground now.”

“You cannot understand Islam by reading the newspapers of Shiites. The Urdu newspaper ‘Inquilab’ is issued by a Shia editor, Shakil Shamsi. You must know that Shakil Shamsi is an extremely foul-smelling Shia….”

“The matter of Sham (Syria) is not trifling. Is the ignorance of Muslims about the situation of Sham not a criminal silence? What do the changes occurring in Sham call us for? The Prophet (peace be upon him) said that the during the war days, Muslims will stay in Al-Ghutha. We must teach our students through geography where al-Ghutha is. We must show them the map of the world today, telling them about those who are controlling this city. The prophet (peace be upon him) said the Hour will not come until you fight with Banu Asfar. He told us that their army will arrive at Dabiq with eighty flags; with each having an army of twelve thousand soldiers. Where is the city of Dabiq? We should tell Ummah about it. Others must know it or not, but at least we must be aware of this city and its ongoing situation. If I tell you, perhaps you will not believe that, the pious slaves of Allah Almighty have gathered together in the city of Dabiq. They have even declared it. So, we are waiting for that day about which the prophet (peace be upon him) predicted that Banu Asfar will come to the city of Dabiq. We are waiting for that day when the pious army from Madina will move towards you. We are waiting for the moment when the army of Sufyani will be defeated at the desert of Baidaa. We must tell the people whatever the prophet (peace be upon him) predicted. Why do you not understand Sham and its location…?”

“Today, the world knows Jordan by the name of Abu Musab Zarqawi. Zarqa is a small village located in Jordan but today it has become the centre of the entire world’s sight. Now Zarqa is being written in the history of Islam by the excellent words. Zarqa has become dangerous fire for Jews. The children of Zarqa feel proud of having Zarqawi. Last week a video tape from Abu Musab Zarqawi came, in which he said that by our blood and parts of bodies we were going to write a new history of Crusades. O enemies, listen to me, our blood and our faith would teach you a lesson and make it a dreadful history. Hearing that the people of Zarqa got ecstatic, the children came out of their houses; all raised slogans with the name of Abu Musab Zarqawi. They threw flowers at Zarqawi’s family. Peace be upon the mother who produced Abu Musab Zarqawi, the brave and powerful son! Japan, Russia, China all have feared this powerful Zarqawi. O mother, peace be upon you for producing such a brave son!”

Besides, various speeches of Mufti Qasmi are available at youtube.com, in which he has openly praised the late leaders of ISIS and provoked Muslims. Some of them are as follows: