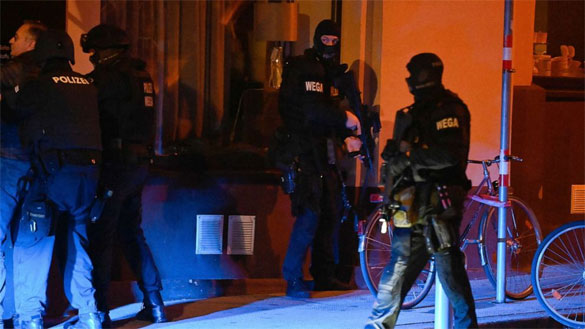 Austrian police men patrol after a shooting near the 'Stadttempel' synagogue in Vienna, Austria.

Austria’s top security official says that four people have died - including one assailant - after a shooting in the heart of Vienna late Monday.

Interior Minister Karl Nehammenr told reporters Tuesday that two men and a woman have died from their injuries. A suspected attacker, who was carrying an assault rifle and a fake suicide vest, was also shot and killed by police.

Nehammer said that initial investigations indicate that the suspect who was killed had sympathized with the Islamic State group.

“The attacker sympathized with the militant terrorist group ISIS,” Nehammer told reporters. He declined to elaborate, citing the ongoing investigation.

Authorities were still trying to determine whether further attackers may be on the run. People in Vienna have been urged to stay at home Tuesday.

Fifteen people were injured in the attack in the center of the capital, among them a police officer.

The shooting began shortly after 8 p.m. (1900 GMT) Monday near Vienna’s main synagogue as many people were enjoying a last night of open restaurants and bars before the start of a coronavirus lockdown.

“We are victims of a despicable terror attack in the federal capital that is still ongoing,” Austrian Chancellor Sebastian Kurz said.

The attack drew swift condemnation and assurances of support from leaders around Europe.

How The Attack Unfolded

Police had cordoned off areas of the city as they searched for the suspect.

“Shots fired in the Inner City district - there are persons injured - KEEP AWAY from all public places or public transport,” the police said on Twitter.

Jewish community leader Oskar Deutsch said on Twitter that it was not clear whether the Vienna synagogue and adjoining offices had been the target of the attack, and said they were closed at the time.

Videos circulated on social media of a gunman running down a cobblestone street shooting and shouting. Reuters could not immediately verify the videos.

Vienna police urged people not to share videos and photos via social media. “This jeopardizes police forces as well as the civilian population,” they said on Twitter.

In 1981, two people were killed and 18 injured during an attack by two Palestinians at the same synagogue. In 1985, a Palestinian extremist group attacked Vienna airport with hand grenades and attack rifles, killing three civilians.

In recent years, Austria has been spared the sort of large-scale attacks seen in Paris, Berlin and London.

In August, authorities arrested a 31-year-old Syrian refugee suspected of trying to attack a Jewish community leader in the country’s second city Graz. The leader was unhurt.

At Least One Officer Is Among The Injured. Police Shot And Killed One Suspect. 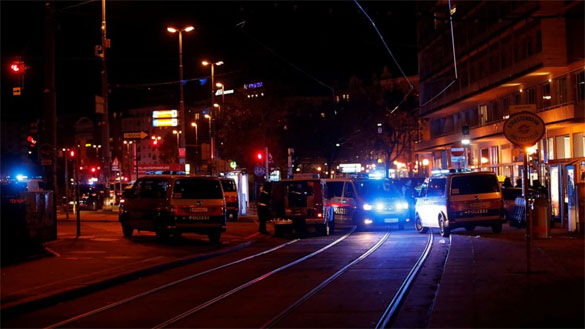 Police blocks a street near Schwedenplatz square after a shooting in Vienna, Nov. 2, 2020.

An attack occurred in the center of Vienna, Austria, on one of the busiest streets hours before the...Read More

At least four people were killed and 15 others, including a police officer, wounded in an "apparent terrorist attack" near a synagogue in central Vienna on Monday, authorities said.

The incident took place around 8 p.m. local time and the first shots were fired in the proximity of the synagogue, a spokesman for the Ministry of the Interior told ABC News. The gunmen then allegedly opened fire in five other places in the downtown area around the city, the spokesman said.

Seven of those injured were listed in critical condition as of Monday evening and were receiving treatment at six area hospitals, Christoph Mierau of the Vienna Health System confirmed to ABC News.

The assault was carried out by at least one gunman who was shot and killed by officers. The suspect was armed with an assault rifle, among other handguns, and was appearing to wear an explosive vest which turned out to be a dummy. The suspect's apartment has also been opened by a SWAT team and searched.

Locals are being advised to avoid nearby public places and public transportation by authorities who said initially they were responding to "several suspects armed with rifles" at "six different shooting locations." The scene was considered "still active" late Monday, police said via Twitter.

The head of the Jewish community in Vienna, Oskar Deutsch, told The Associated Press earlier in the day that the shooting was near the city's main synagogue, but it wasn't clear whether the building was targeted. It was closed at the time of the incident.

"We are currently experiencing difficult hours in our republic. I would like to thank all the emergency services who are risking their lives, especially today, for our safety. Our police will take decisive action against the perpetrators of this vile terrorist attack," Austrian Chancellor Sebastian Kurz said via Twitter. "I am glad that our police officers have already been able to neutralize a perpetrator. We will never allow ourselves to be intimidated by terrorism and will fight these attacks resolutely by all means."

The Ministry of the Interior spokesman said the manhunt was still ongoing as of midnight local time.

Children have been encouraged not to attend classes Tuesday, even though schools are not closed.

Security checks -- such as authorities stopping random cars and checking them -- at the border have been launched, in response to the attack, according to to David Schoen, a spokesman for the Czech police.

The U.S. embassy in Vienna also warned Americans in the city to be cautious and stay indoors as the manhunt continues.

All Synagogues, kosher restaurants and Jewish supermarkets are set to stay closed today across Austria on Tuesday.

There will be a police press conference at 2 p.m. local (8 a.m. EST) where further details about the attack will be given.