'Supporting the ISIS Caliphate Is Binding On All Muslims, ISIS Fulfils Maulana Azad And Maududi's Aspirations For The Islamic Caliphate,' Says Jamaat-e-Islami Hind

Supporting The ISIS Caliphate Is Binding on All Muslims says Jamaat-e-Islami Hind in the various editorials appearing in its mouthpiece, the Dawat. It asks Indian Muslims to support and glorify ISIS and Boko Haram. In its view, ISIS fulfils Maulana Abul Kalam Azad and Abul Ala Maududi's aspirations for the Islamic caliphate.'

We are presenting below English translations of the editorial notes and articles of Jamaat-e-Islami India’s mouth piece the Dawat’s 22 August and 25 August 2014 editions.

The first article criticises the secular, progressive Muslim intellectuals and activists participating in the press conference held in Delhi on 19th August to condemn the atrocities perpetrated by the ISIS against Muslims, particularly Shias, Christians, Kurds and Yazidis in Iraq in the name of Islam. The editorial calls all the participants stooges of the US and the Zionist forces and ignoramuses who do not understand the reality of the ISIS.

The second article published in 25 August edition of Dawat glorifies the ISIS and tries to convince the Muslims to welcome its so-called Caliphate instead of condemning and criticising it. In fact it says that supporting the ISIS caliphate is binding on all Muslims. The argument it presents in its favour is that the announcement of caliphate by Baghdadi is a far more powerful step than the powerful lectures and writings of Maulana Abul Kalam Azad and Abul Ala Maududi who, according to the author or the editorial board of Dawat, had aspirations for the Islamic caliphate. In their words, Abu Bakr Baghdadi is a greater Islamic personality than Maulana Abul Kalam Azad and even the founder of Jamaat-e-Islami Maulana Abul Ala Maududi because Baghdadi has given a new lease of life to the concept of Khilafat which the two Islamic scholars wanted materialized.

However, the author of the Dawat editorial board forgets that neither Maulana Maududi nor Maulana Abul Kalam Azad were advocates of Khilafat. Maulana Abul Kalam Azad was an Indian nationalist and opposed the idea of or the demand for a separate Islamic state, leave aside Islamic Khilafat. Maulana Maududi’s Jamaat-e-Islami too opposed a separate state for Muslims and even after the creation of Pakistan, Maulana Maududi, at the most, wanted a theocratic democracy, much in line with the democratic power structure of Iran. The spiritual father of Pakistan, Iqbal too advocated for Spiritual or Social Democracy for Pakistan and not Khilafat.

Earlier in one editorial note, the editors defended Boko Haram, the most notorious terrorist outfit in Nigeria saying that the abductions of Muslim schoolgirls by them  was a US propaganda to attack Muslim countries.

The biweekly Dawat, the mouthpiece of Jamaat-e-Islami Hind, has been regularly publishing such misleading editorials and articles that glorify the ISIS, Boko Haram and other Islamic terrorist and extremist organisations that work in violation of Islamic teachings and on sectarian lines. The ISIS has been killing Shias, Kurds, Christians and Yazidi minorities, either confining them without food or water and abducting their women for forcible marriages and sexual exploitation or forcing them to leave their ancestral land for belonging to a different religion or sect than theirs. According to the editorial team of Dawat, the Muslims should ignore such chilling murders and sexual exploitation of women because they have ‘given the concept of Khilafat a new lease of life’ which even Maulana Azad and Maulana Maududi could not achieve.

The Reality Is Emerging

From the storm arising out of global military shadows hovering over Iraqi skies and propaganda emanating from there, it is becoming increasingly clear that the game of setting the global human fraternity against Islam and Muslim Ummah by maligning them that the Zionist forces started under the patronage of the US is meeting with great success and different groups of people are getting trapped in their game plan. The recent example of this is the Press Conference held in Delhi in which the so-called ISIS or the Islamic State in Iraq and Syria was condemned in strongest possible terms and declared the greatest threat to the entire humanity. Muslim participants termed it as a violation of Islamic teachings and an attempt was made at creating an adverse public opinion by declaring the alleged actions of the ISSI - persecuting the religious minorities - as the greatest atrocity. Signatures of those who accepted the proposition were taken. People belonging to different schools of thought were present in the press conference and their anger was noticeable.

Are These People So Naïve?

So it seems that the participants of the press conference believe that an entity called the Islamic State really exists and is militarily so powerful that today all the military powers of the entire world including that of America are helpless, so much so that even their aerial and drone attacks have proved a failure. The participants of the Press Conference are well educated, so they cannot be so naïve as not to be able to distinguish between fact and propaganda. Therefore, it cannot be inferred that they have fallen in the trap of the US due to their naiveté. Is it possible that they have become a part of the game knowingly. There are two kinds of people among them. One, those Muslims who have sympathy for Islam and Muslim Ummah. They are very simple minded like Meer Taqi Meer (the Urdu poet). Two, there are those who have Muslim names but get infuriated the moment the word Islam is mentioned, though they are considered the well wishers of Muslims. There are people belonging to other religious groups who are expressing their traditional grudge against Muslims by calling the allegations of ISIS atrocities against Christians and Yazidi minorities in Iraq to be true.

However, to whatever school of thought they belong, they should answer what the following statements of the western leaders and information coming from the western media mean:

"The US President Obama has categorically announced that the Islamic Caliphate will not be allowed to be established at any cost…."

“It has become necessary to obliterate Sunni Islam from the world…."

"The end of Islamic terrorism has arrived…."

The world is not safe in presence of Sunni Islam, etc. One question is: Is the US so weak militarily? In fact, it is so powerful that it can annihilate the ISIS in ten minutes. Why then is it not doing so? These educated people should know that the Islamic State is nothing in itself; it is a creation of the US. Whatever is being perpetrated in its name is being done by the US. So if they want to condemn all this, they should actually condemn the US. Nothing will come out by making a hue and cry against the stooge. It should be seen who is using this instrument and for what purpose. As a matter of fact, we have not much of a complaint against them. If the Muslim rulers have joined this American game with their full wealth, where do the people participating in the press conference in Delhi stand? (PR) 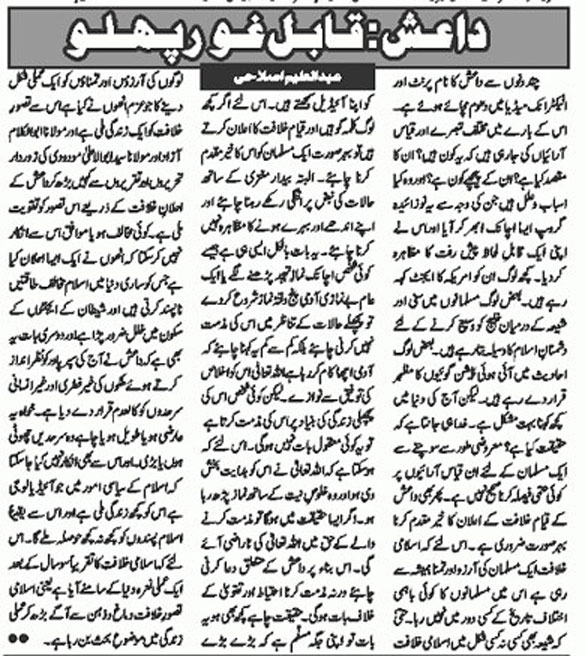 ISIS: Some Points to Ponder

For the last few days, the ISIS has been making headlines in the print and electronic media. Various views and opinions have come out about who they are, what their goal is, who is behind them and what are the reasons that have catapulted this new born organisation all of a sudden into such prominence and it has made such considerable advances.

Some people say that they are the agents of the US while some others are of the opinion that they are a tool in the hands of the enemies of Islam to drive a wedge between Sunni and Shia Islam. There are few others who call it a manifestation of predictions in the ahadith'. But it is very difficult to say anything in this world. Only God knows what the reality is.

Objectively speaking, it will not be wise for Muslims to form a final opinion on the basis of speculations.

Still, it is very necessary to welcome the announcement of the establishment of Islamic Caliphate by the ISIS because Islamic caliphate is the aspiration of every Muslim and there has never been a disagreement on the issue among the Muslims in any period of history.

So if some Kalmahgo people (Muslims who say Kalima, i.e., La Ilaha Illallah, Muhammad ur Rasullullah: There is not god but one God and Mohammad is the Prophet of God) announce the establishment of caliphate, a Muslim should welcome it at any cost. Of course, one should be cautious and thoughtful and keep abreast of all developments and should not demonstrate one’s blindness and deafness. This is the same as someone suddenly starts offering Tahajjud (night prayers) or a common Muslim starts offering five prayers. He should not be condemned on the basis of his past practices. We should at least say that that the person is doing something good and so God may bless him with purity of thought and heart. But it would not be wise if someone condemns his action on the basis of his past life because God may have blessed him with divine guidance and so he might be offering namaz with all sincerity. If this is true, then the person condemning him will invite God’s wrath.

On this basis, we should pray in favour of the ISIS. Otherwise, condemning it would be against Ikhlas (purity of intensions) and Taqwa (piety).

Irrespective of the reality, this is a truth that the resolve they have expressed to give a practical shape to the aspirations of great personalities has given a new lease of life to the idea of Khilafat. This idea of Khilafat has got more strength from the announcement of Khilafat by the ISIS than the powerful lectures and writings of Maulana Abul Kalam Azad and Maulana Abul Ala Maududi. One may oppose or support it, but one cannot deny the fact that they have made an announcement which all the anti-Islamic forces dislike and it has disturbed the peace of mind of the agents of Satan.

Secondly, ignoring the superpowers, the ISIS has declared the unnatural and inhuman borders of countries null and void, irrespective of whether the borders are temporary or permanent, short or long. It cannot also be denied that the ideology of political affairs of Islam has got a new lease of life and it will surely encourage Islamists because after hundred long years of Islamic caliphate a workable slogan has come forward in the world. That is, Islamic concept of Caliphate has become a topic of discussion in practical life.