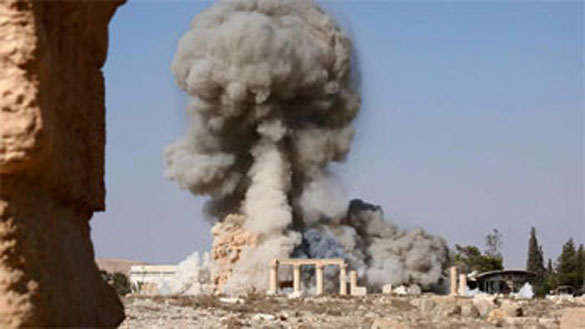 Islamic State has released images of what appears to be the destruction of the Temple of Baalshamin at the ancient ruins of Palmyra in Syria.

Syrian pro-government forces battled their way Friday into the outer areas of the city of Palmyra, the archaeological metropolis held by Islamic State militants since May of last year, as part of a punishing month-long drive to wrest control of the city and surrounding areas from the extremist group.

Syrian state television broadcast images of soldiers backed by armoured units advancing toward the city as Syrian and Russian helicopters and warplanes pounded militant positions ahead of the troops. The state news agency said army units and allied fighters had retaken the ancient citadel, a 13th century castle perched atop a city whose 2,000-year-old antiquities have become some of the most devastating casualties of the occupation.

Some opposition activists disputed the extent of the gains, and fierce fighting was still underway, but it appeared clear that Russian airpower was helping turn the tide in Syrian President Bashar Assad's push to recapture large swaths of territory that have been declared part of Islamic State's caliphate.

Moscow earlier this month said it would withdraw most of its forces from Syria, but President Vladimir Putin has made it clear that recapturing Palmyra remains a crucial objective.

"I hope that this pearl of world civilization, or at least what's left of it after bandits have held sway there, will be returned to the Syrian people and the entire world," Putin said.

A UNESCO World Heritage site, Palmyra was one of the most important cultural centres of the ancient world; its storied ruins include more than 1,000 columns, a Roman aqueduct and a necropolis of more than 500 tombs.

Drone footage released by Russian media outlets Friday showed that many of the city's columns and arches had been spared from destruction. Yet it also confirmed the potentially irreparable damage inflicted upon the temple of Baalshamin and the heart of the temple of Bel.

The city's loss to Islamic State in May was a key setback for Syrian government forces. Overstretched troops, unable to hold ground across a variety of fronts, were forced to give up the city to defend provinces considered more essential to the government's survival.

But Palmyra's recapture would yield more than just a morale boost; The city lies along an important thoroughfare, the M20 highway, connecting the capital to government-held areas in the eastern desert.

Retaking the city would also mean access to Palmyra airport, several weapons depots and the oil and gas facilities stretching from central Homs province into the eastern province of Deir Al-Zor.

The assault on Palmyra came as government forces in neighbouring Iraq began the early stages of a separate offensive to retake Mosul, Iraq's second largest city, captured by Islamic State in June 2014.

The semi-official Iraqiya News network reported Thursday that Iraqi pro-government troops declared "the launch of the first phase of the conquest operation to liberate Ninawa province," of which Mosul is the capital. Analysts say the campaign to retake Mosul, a city of more than 1 million, could drag on for months.

The tide in Palmyra began to turn on Thursday, when pro-government forces secured the southwest entrance of the city and parts of the hotel district nearby.

Opposition activists confirmed reports of the government's advance but denied that Syrian forces had entered the city itself. The Syrian Observatory for Human Rights, a watchdog with a network of activists on the ground in Syria, said pro-government forces had also taken areas north of the city.

Observatory head Rami Abdul Rahman warned in a phone interview Thursday that any move into the city itself would be a difficult fight, with scores of mines planted around the city. Government forces are also hampered by the need to protect the ruins.

"Advances will be slower now because the regime forces can't use any heavy weaponry for fear of damaging the archaeological sites," said Abdul Rahman.

"It's a street fight among the ruins, and there are very violent clashes there right now," he said.

Opposition activists reported that Islamic State had ordered civilians to evacuate the city.

"There are no more residents in the city. [Islamic State] told them to leave," said Abu Majd Tadmuri, an activist with the Tadmur Coordination Committee who uses a nickname for security reasons.

He added that residents, thought to number anywhere from 5,000 to 15,000, had made their way toward Raqqah, the de facto capital of Islamic State, more than 100 miles northeast of Palmyra.

The evacuations seemed to be corroborated by a video released on Thursday by Aamaq, Islamic State's unofficial news agency. It showed a pickup driving through the streets of an abandoned Palmyra, its streets devoid of life and its storefronts shuttered. It also showed a bearded militant sitting atop the rusting hulk of a tank, voicing a threat to Putin.

"And we say to Putin, Allah permitting, no matter how much you all rally, and no matter of how much you amass against this blessed state, we will be victorious against those disbelievers," said the fighter, according to a translation provided by the SITE Intelligence Group, a monitor of Jihadi groups.

Islamic State marked its reign in Palmyra early in the occupation by using the city's magnificent theatre, once home to a music festival, to stage a gruesome mass execution of army soldiers left behind.

Militants blew up many of the city's irreplaceable monuments, obliterating the magnificent Arch of Triumph, the temple of Baalshamin and the Temple of Bel, a unique structure dating from 32 A.D. — even while doing a brisk illegal trade in artefacts small enough to be smuggled across Syria's borders.

In August, the group beheaded Khaled Assad, retired director of Palmyra's antiquities and museum, before crucifying his mutilated corpse on a traffic light pole in the centre of town.

Islamic State enforces a harsh interpretation of sharia, or Islamic law, which counts monuments as sites of pagan worship.

UNESCO described the carnage as "an intolerable crime against civilization."

Maamoun Abdel Karim, head of Syria's antiquities and museums department, said he is hoping for "a fast operation" to liberate the city.

"Our hope is that the battle will end today or tomorrow and it will be the end of the misery we endured for ten months," he said in a telephone interview from Damascus. "Its liberation will be one of the most beautiful moments of my life." He said he is eager to go to Palmyra and assess the damage to the artefacts.

"We're just waiting for the liberation to happen, and then we'll visit the site to see the nature of the damage and their type and what we can undertake an emergency repair plan," he said.

Bulos is a special correspondent.