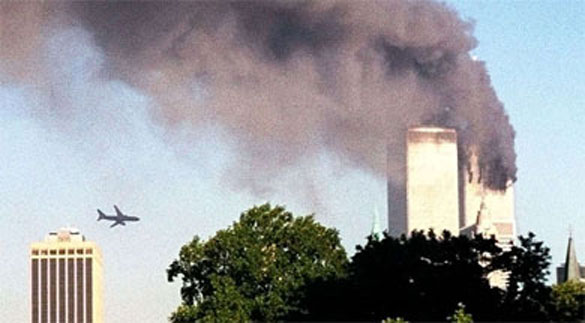 A plane approaches New York's World Trade Center moments before it struck the tower at left, as seen from downtown Brooklyn, Tuesday, Sept. 11, 2001

In spite of the attempts of many Arab countries to deny their direct links to the comprehensive plans prepared by the Central Intelligence Agency (CIA) to resolve the cold war, which lasted for nearly three decades between the US and the erstwhile Soviet Union, the many resources, explored by specialist researchers, have revealed beyond doubt that many were involved in the process.

The main features of the plan had been prepared by US intelligence institutes and research centres for decades. The elements of the plan agreed with the status of conflict during the time of cold war. The first element was "the launching of ideals before firing the shots". Taking into consideration the deep psychological rift between Muslim peoples and countries, and the Soviet Union, exploitation of Islam in such confrontation was the target, declaring war on atheism.

The second element entailed the transfer from the psychological and cultural conflict to the stage of confrontation. This involved the preparation of a country neighbouring the Soviet Union, and use it as a model, copying the experience of the US war in Vietnam. Accordingly, the ideal choice was Afghanistan to produce a confrontation that takes the shape of a holy war.

This strategy was designed as a target to be implemented throughout the late 1970s during term of President Jimmy Carter. His National Security Adviser Zbigniew Brzezinski accordingly became the engineer and supervisor to implement the plan.

During his visit to Riyadh in January 1980, Brzezinski met the then Saudi Crown Prince Fahd bin Abdulaziz and briefed him on the main aspects of the holy war project in Afghanistan. The Crown Prince instantly fell in love with the project. In addition to the required finances for the project, he asked that Saudi Arabia play a much bigger role on the level of political communication with the Jihadist Command. Saudi Arabia hurried to join this project out of its wish, or rather obsession, of leading the Arab and Islamic worlds, especially after the regression of the Egyptian role and rising competition from the Islamic Revolution in Iran. Besides, Saudi Arabia found in declaring a holy war on atheism at Afghanistan a justification for its failure to address the more immediate challenge of the Arab-Israeli conflict.

Brzezinski expressed his happiness regarding the enthusiasm of the Saudi prince for the project. When they discussed finances, the prince suggested that the two sides establish a rotary fund, where Riyadh and Washington finance evenly on condition that minimum credit at any given time should not be less than $1bn. From the very start Saudi Arabia was committed to pay its share on time. However, following an advice given by the president of the French Intelligence Agency to the then US President Ronald Reagan, the US paid its obligations by financing the jihadist operations through the resale of the seized illicit drugs instead of destroying them.

Jihad in Afghanistan was declared worldwide and young enthusiastic people from different countries hurried to join in. The Saudis, Egyptians, Algerians, Moroccans, Syrians and Palestinians accounted for 25,000 to 30,000 fighters within the first five years of declaring jihad. Those were known later as the Arab Afghan, and formed the basis of the Al Qaeda organisation. The Pakistani intelligence agency ISI, under the supervision of the CIA, opened a services office in Islamabad for receiving Arab fighters and preparing them to join the fighting operations.

Salafist Abdullah Azzam was the first to supervise this office. He used to receive direct support from the US. According to a number of narratives, he was the one who convinced the Saudi young man Osama bin Laden to join the ranks of the jihadists. Bin Laden was already convinced with the ideas and eventually decided to join the fighters in 1982.

In the early stage, the Arab Afghan saw that it was necessary for them to be independent from the Afghan fighting factions and formations, and decided to have their own camps. Taking into consideration that bin Laden was the most prominent jihadist leader, he was able to establish six camps that attracted those willing to join from among the young Arab men. The group was called Al Qaeda, and experts in Islamic movement see that the name appeared for the first time between August 1988 and the end of 1989.

Eventually, the Russians withdrew from Afghanistan in 1989, and all the involved groups dispersed and ceased the jihadist operations against atheism. However, the beast was already unleashed and became a threat for its creators.

In time, bin Laden returned to his home country without abandoning his project, and the presence of US military forces on the Arab Peninsula pursuant to the Iraqi invasion of Kuwait in 1990 was an incentive for him to continue his holy war. He based his jihad on the fatwas of a number of Salafist Sheikhs (Muslim clergymen) saying that it is mandatory for each Muslim and the Arab Peninsula people in particular, to fight until the land of the two holy mosques is completely purged. Again, the call for jihad adopted an international form, and what is known as Al Qaeda in the Arabian Peninsula was created.

The relations between Al Qaeda and the CIA at this stage started to worsen and bin Laden was considered an enemy and a terrorist. First, the CIA accused bin Laden in 1994 of financing camps to train terrorists in east Sudan. In the following year, CIA accused him of the same in east Yemen. Things became hard on the leader of Al Qaeda and after moving through different countries including Saudi Arabia, Somalia, Sudan and Yemen, bin Laden returned to his safe haven in Afghanistan, where he and his organisation enjoyed the protection of Taliban.

However, this place was also not safe; especially after US President Bill Clinton issued an authorisation to the CIA in 1996 to use every means to destroy the network of bin Laden. Two major explosions took place in Saudi Arabia in 1996. The first was in Riyadh and the second in Al Khobar, which killed 20 US military personnel. Though bin Laden did not assume responsibility for any of the two, he issued later in the same year his first statement on "declaring jihad to expel infidels from the Arab Peninsula", calling on Saudis to attack the US forces in the Gulf region.

In an escalation that climaxed in 1998, he called through a coalition with a number of Islamic groups in Afghanistan for the killing of Americans and Jews including civilians anywhere, anytime. Based on this fatwa, it was natural that the operations targeting the US sites and locations would increase, most prominently the explosions at the US embassies in Nairobi, Dar-e-Salem, Tanzania, and Kenya. For each blast, the accusation pointed to bin Laden and his jihadist organisation, until the major accusation came, which was charging him for the September 11, 2001, attacks in New York and Washington.

Nabal Khammash is a Jordanian writer and political analyst