Dar ul Uloom, Deoband: Putting Genies Back in the Bottle

It is the pot calling the kettle black. For decades India has accused Pakistan-based fundamentalists of exporting religious extremism to India. The fountainhead of Islamic fundamentalism in South Asia, however, is not Akora Khattak, but Deoband in India. 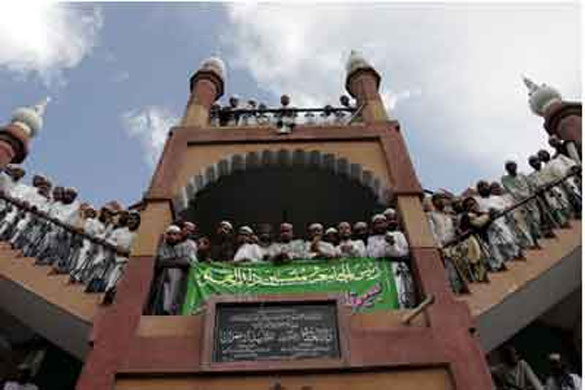 India has long accused Pakistan-based religious seminaries of radicalising the youth and sending them over the border to fight in the Indian-administered Kashmir.  She has also accused Islamabad of either covertly supporting such seminaries, or not doing enough to keep them in check. India, however, has failed to do the same domestically.

The Deoband-based seminary, Darul Uloom, is perhaps the most radical of all religious seminaries in South Asia. And whereas, religious leaders of all stripes in Pakistan, with the exception of the Taliban who are not necessarily religious but religiously motivated militants, have issued religious edicts against suicide bombings and targeting civilians, the India-based Darul Uloom has failed to do the same. Indian authorities will be well-served to recognise the challenges at home before they accuse others.

Darul Uloom maintains an active website to offer edicts on matters of interest to Muslims. Essentially, edicts are answers to questions posed by the sect’s followers. It is not what the scholars at the seminary have said about violence that raises concerns. In fact, it is their conspicuous silence that is alarming. In a question about suicide attacks against non-Muslim forces, the scholars at Darul Uloom had nothing to say. Instead, they asked the inquirer to consult the local scholars in his vicinity.

How is it that the dozens of religious scholars in the Darul Uloom have no opinion on such an important matter? It is not that the Ulema are shy in expressing opinions. When someone inquired about how to clean one’s teeth with Miswaak (a teeth-cleaning twig of the Salvadora Persica tree), the Ulema offered a specific response: apply the twig across the teeth and along the tongue. They instructed to start cleaning the teeth from the right side and end on the left. They further asked to rinse and repeat three times. As for suicide bombings, the Ulema at Deoband had no opinion.

The past decade of violence in Pakistan has been alleged to have been perpetrated more by the followers of the Deobandi school of thought than any other religious sect. A doctoral dissertation at the University of Pennsylvania revealed that of the 2,344 terrorists arrested in Pakistan, whose guilt was substantiated by sufficient evidence, more than 90 per cent followed the Deobandi sect.

The rise of the Deobandi sect in Pakistan was a coordinated effort sponsored by the Saudis and the Americans to raise beachheads to fight against the Soviet Army in Afghanistan. With the collapse of the Soviet Union, the Deobandi and other militias raised in Pakistan were of no use to the Americans. In the 90s, the graduates of the Afghan war and other madrasa alums were first deployed to the Indian-administered Kashmir to fuel the insurgency. The militants returned to Afghanistan and Pakistan after 9/11 to fight against the Americans who in fact had financed the very seminaries that produced the militants.

For Pakistan, the violence has been catastrophic. Thousands have died a violent death since the start of militancy in Pakistan, which also has an ugly sectarian side to it. Since 2003, thousands belonging to sectarian minorities, including Shias and Ahmadis along with hundreds of non-Muslims have fallen prey to the extremists. Pakistanis can use a strong religious voice against militancy and sectarianism. Instead, they have to battle the militants and the silence of their religious scholars.

Another follower of the Darul Uloom asked the scholars to opine about the fact that Pakistan-based Jamiat-e-Ulema-e-Islam (JUI), a Deobandi religo-political outfit, had partnered with the Shias. The inquirer was concerned that JUI’s teaming up with the Shias would reduce hatred against the Shias who may no longer be declared apostates. Yet again, the scholars at Deoband referred the inquirer to consult with his or her local religious leaders.

The fact that sectarianism threatens the very survival of Pakistan should encourage the Deobandi Ulema in Pakistan to speak against violence in unequivocal terms. They should chart out their own path independent of the seminary in India, which has not been helpful with its silence over violence and sectarian hatred.

Sectarian and religiously motivated violence has been consuming the region for decades. India should consider having a constructive dialogue with the religious leaders and scholars at Deoband. It is time to put the genie back in the bottle.